Lost a bike outside the Hudson's Bay Centre on Bloor? You might want to give the building's security team a call. It appears the building's owners, Brookfield Properties, are removing bicycles locked on the sidewalk without permission. No warning notice, no note of explanation.

The matter came to light last night when Lisa Ferguson, a public policy consultant who had locked her bike to a TTC subway sign outside the building, returned to find it missing.

"I walked up and down the sidewalk for several minutes," she wrote in a Facebook post before asking someone from the building's security team if they might have caught the incident on CCTV.

Ferguson says Hudson's Bay Centre security, which is provided through a company called RSSI Security, told her they had cut through her heavy-duty Kryptonite lock and placed her bicycle in storage.

She was told security is regularly directed by Brookfield management to remove bicycles locked to signposts or trees outside the building.

The north side of Bloor, east of Yonge, does have several places to lock a bicycle, most of them located outside the Marriott hotel. Closer to the intersection with Yonge, cyclists are often forced to use signposts, trees, or other vertical fixtures.

City by-law 743-9 prohibits people attaching or locking any object to a garbage can, signpost, or other municipal property on public sidewalks. However, in July 2012, city council tweaked the rules slightly, providing an exemption for bicycles that, in the opinion of Transportation Services are "in good operating condition and [are] not chained, locked or attached so as to damage or interfere with the use of municipal property." 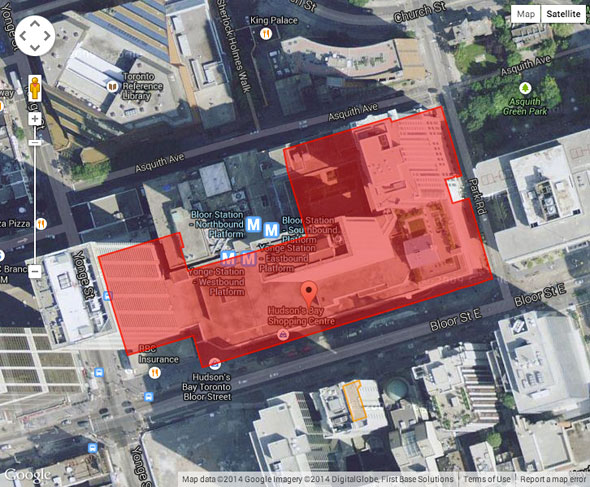 A portion of sidewalk outside 2 Bloor Street East does in fact belong to Brookfield but as this map that draws from the city's Open Data illustrates, the privately-owned space does not extend more than a metre or so beyond the building itself. A call to the city confirmed the subway sign where Ferguson's bike was locked is indeed part of the public sidewalk and therefore, it would appear, a legal place to park.

Staff at the Hudson's Bay Centre refused to comment on the matter and my questions were directed to Brookfield's corporate office in New York City. So far, repeated enquiries have gone unanswered.

Brookfield Office Properties says the bikes were removed as a safety measure and apologizes to cyclists who believed their property had been stolen.

"We have free exterior and interior bike racks at Hudson's Bay Centre in Toronto, as well as a secure bike storage facility within our garage. As adjacent property owner, we have the right to remove a bike or otherwise affixed object to property and the TTC pole on the sidewalk outside of our building if it poses a perceived risk to pedestrians," the company said in a statement."

"It is our first and foremost responsibility to protect the health and safety of our tenants and all those that visit the building. There have been numerous instances at this location where pedestrians have tripped over or have otherwise been injured by bicycles affixed to the pole."

"We apologize to anyone who believed their bike was stolen and in the future endeavor to provide either a verbal or written warning before removing a bike or other property from a prohibited area."