5 random facts about Toronto to help you win at trivia

Did you know Toronto has hosted an Olympics in the last 40 years, or that one of the first street maps of the city was engraved by a precocious 13-year-old?

Well, now you do. This city is a treasure trove of interesting tidbits. After all, it's the spiritual home of the Whoopie Cushion, Canada Dry ginger ale, and 5-pin bowling.

We've already posted about 10 quirky things you might not know about Toronto and followed that up with more local curiosities, but there's just so many random and interesting things to know about our city.

Here are 5 fascinating Toronto facts that are sure to bolster your trivia knowledge even further.

Rick James and Neil Young were bandmates in Toronto

The Mynah Birds never released an album, but the R&B; group's lineup reads like a classic supergroup: Neil Young, Rick James, Goldy McJohn, Nick St. Nicholas, and more. The group was bankrolled by John Craig Eaton, of the family behind Eaton's department store, and famous locally for their surreal and electrifying gigs.

"Neil would stop playing lead, do a harp solo, throw the harmonica way up in the air and Ricky would catch it and continue the solo," authorized Neil Young biographer Jimmy McDonough wrote in his book Shakey.

The group hit the skids when James, AWOL from the U.S. Navy, was arrested. "We thought he was Canadian," Palmer is quoted as saying in the book. 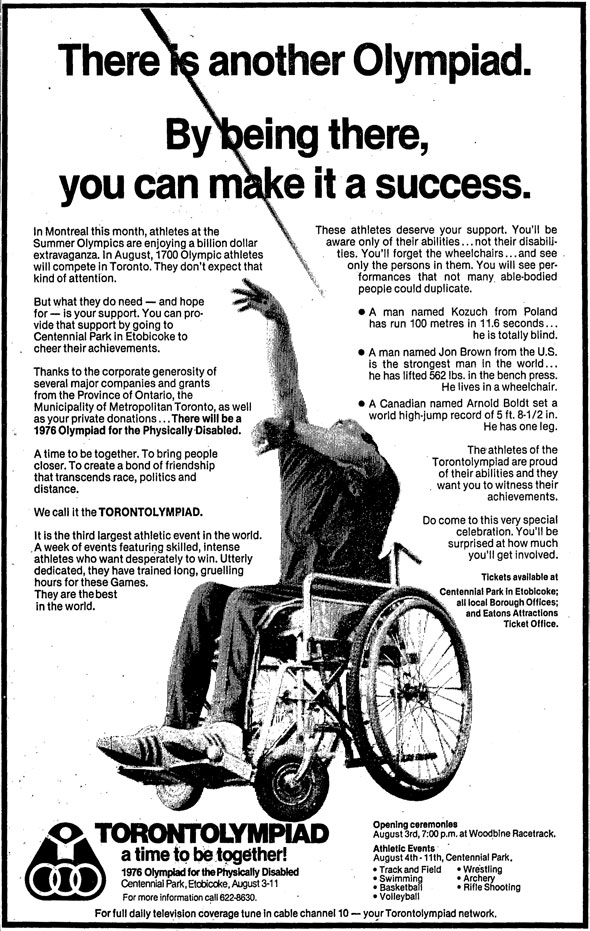 It's true, while Montreal was grabbing international attention for hosting the 1976 Summer Olympics, Toronto was quietly hosting the counterpart paralympics. Branded that year as the "Torontolympiad - 1976 Olympiad for the Physically Disabled," some 1,600 people from 40 countries participated in some seriously low-budget events.

No facilities were constructed for the games so the opening ceremony took place at Woodbine Racetrack. Athletes were housed in student dorms at York University, University of Toronto, and rooms at the Canadian National Institute for the Blind. Events like archery, goalball, and swimming were held at Centennial Park.

The decision to allow apartheid South Africa to compete in the Torontolympiad stirred controversy and a number of countries staged a boycott.

Sam McBride, the first mayor of Toronto to die in office, was the city's chief magistrate for the founding of the Toronto Transit Commission and the squashing of plans for a tunnel to the Toronto Island. He died aged 70 in the first year of his second term as mayor.

"Don Summerville died trying to be nice to people," Toronto Telegram columnist Frank Tumpane lamented in 1963 following the sudden death of the mayor. Summerville, a former Maple Leafs practice goalie, was playing in a charity hockey match in aid of Italian flood victims when he was forced to quit early, complaining of fatigue. He died minutes later of the second heart attack of his life in the locker room aged just 48.

Young Alphaeus Todd was barely a teenager when he produced one of the first street maps of early Toronto. By walking the town and converting his paces to a fixed scale, Todd managed to produce a remarkably functional map of the area south of Queen (then Lot) between Parliament and Peter streets.

For his efforts, prominent lawyer and member of parliament Robert Baldwin Sullivan convinced his counterparts to pay Todd and give him a job in the legislative library, thus beginning Todd's prolific career as a librarian and owner of some of the best sideburns in local history.

Amelia Earhart got an early taste of flying here

Everybody knows how the Earhart story ends, but what most people don't know is the famous aviator has Toronto connections. Earhart's sister Muriel lived here in 1918 and it was it during a visit to Toronto that the 21-year-old Amelia witnessed the city's war wounded.

"One day when we strolled down King Street, three soldiers on crutches approached us. All three had lost a leg. The poignant sight deeply affected Amelia; she had seen nothing like it in our country," Muriel recalled in a 1987 autobiography.

Earhart studied nursing at the Spadina Military Hospital and tended to injured soldiers during the final months of the first world war. She first saw airplanes at one of Toronto's airfields, but it wasn't until she had recovered from a bout of Spanish Flu and moved to California that Earhart first climbed into the cockpit of a plane.