The once predominantly low rise stretch of Wellesley Street between Yonge and Church is set to get another soaring condo, as Plaza has announced a 37-storey project to be known as 50 at Wellesley Station. This latest development will join 22 Wellesley Street East in transforming the street into a far denser corridor. Throw in the 54-storey Wellesley on the Park project immediately west of Yonge and you have an area that sets to get a massive influx of people over the next few years.

From the early renderings, 50 at Wellesley Station is one of the less bland projects that I've seen, with an L-shaped podium that offers visual interest at street level and a seam on the northeast side of the tower that tempers the monotony that so many glass buildings suffer from. I'd venture that the Quadrangle Architects' design is a nicer looking than the more bold Wellesley on the Park, but it's possible that the latter will come out looking better than what the renderings suggest (and it will have a lot more green space). 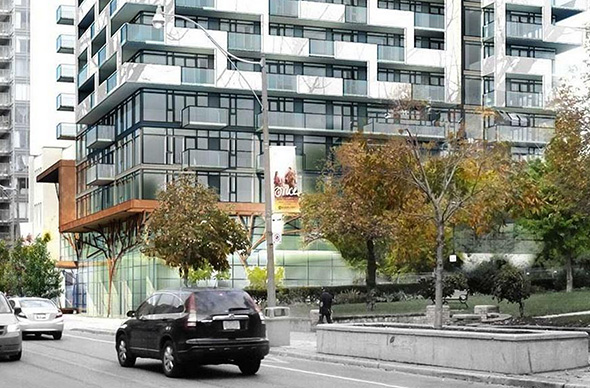 In the absence of detailed information, it's difficult to give an early verdict on 50 Wellesley, but the first signs are auspicious enough. What do you think? Will this prove to be a good addition to what is a rapidly expanding neighbourhood?