How much has Toronto changed since 2007?

The world of Google Street View is an impossible mash-up of different days, weeks, and months. It's tempting to imagine the unprecedented world tour as a giant explorable photograph, but really it's a collage world - a place that could never (and did never) exist. Click down a side street and the weather and sometimes the season changes. Buildings that are standing when viewed from one angle are gone from another.

With the new timeline feature, which lets viewers see (some) streets change over the last seven years by shifting a little slider, we're given a window into an eerily familiar lost world. It's a handy tool for jogging memories about what happened when and where, for remembering signs and subtle details human memory skips over.

Here are some the best places to visit in the Toronto of 2007 that I've found so far. Give your suggestions in the comment section.

The motel strip on Lake Shore Blvd. peaked in the 1950s and was in a state of steady decline during its last decades in existence. Swish drive-up rooms cheekily modelled after Spanish farmhouses and futuristic little Art Deco gems gave way to late-night shenanigans and squalor. By 2007, the earliest visit by a Street View car, the motels that were still standing were about to be knocked down for condos. Watch the Hillcrest dissolve into the Waterways condos. 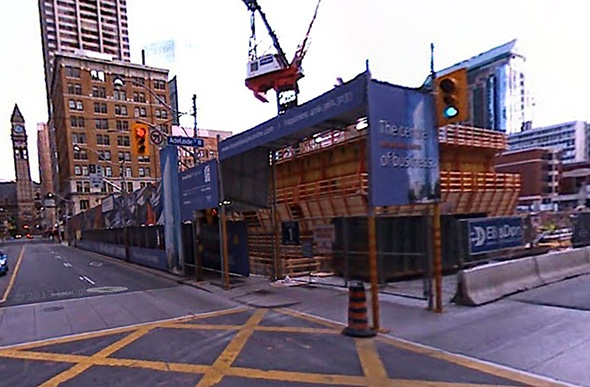 It took decades for the Bay-Adelaide Centre to get more than six storeys off the ground, but when Brookfield began assembling the first phase of their two-tower project it coincided with the groundbreaking of the Trump Tower on the opposite corner. Starting in 2007, both sites are surrounding by construction hoarding, but skip to 2009 and the glass Brookfield tower appears to burst fully-formed out of the ground, leaving Trump a stump. Crane the camera skyward and watch the towers appear. 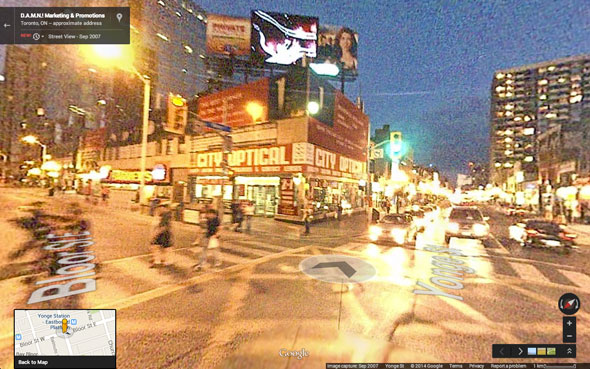 What's most surprising about Yonge and Bloor from Google's perspective in 2007 is that it appears to be taken in the late evening, some time approaching sunset. The street is soaked in sodium-vapor orange, looking more like 1980s New York than Toronto. City Optical and Harvey's still occupy the southeast corner. But skip ahead and dusk turns to day and the corner becomes a construction hot spot. "Drive" down Yonge and the street cycles from dark to light like days, possibly weeks are passing. At Dundas, check out the unfinished entertainment complex on the north side of the street.

Unlike busier Toronto streets, East Liberty Street has only been photographed by Google four times. Luckily, those pictures perfectly capture neighbourhood's condo boom. Looking south opposite the old Central Prison chapel, the cleared site that was once dense with factories and railway sidings becomes a concrete shell and, finally, a fully formed building. Spin around 360 degrees to take in the full scope of the transformation.

From a perch on the Gardiner Expressway, the patina covered roof of the Royal York Hotel is visible across a parking lot. Move the slider and watch the curved Ice Condos and Telus towers rise skyward from the back door to the Air Canada Centre. Goodbye, hotel. 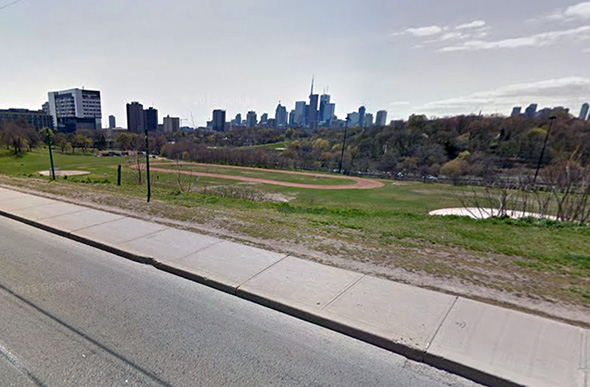 Riverdale Park hasn't changed much in five years, but the Toronto skyline that is visible in the distance has, albeit subtly. Starting in 2009, (the 2007 photo is too overexposed to reveal much detail) the CN Tower, Scotia Plaza, and First Canadian Place, the stalwarts of the city's skyline since the 1980s, are slowly, almost imperceptibly, obscured by new development. Keep an eye on the foreground as the Riverdale Hospital "half-round" disappears and is replaced by Bridgepoint Health.

The bungalow at the centre of the Rob Ford crack cocaine scandal appears on Street View as far back as 2007, when the picture is decidedly more grainy. It's late summer and the sun is setting. Someone in a white shirt is sitting out front just to the left of where, several years later, the local city councillor - by then the mayor - will be photographed with three men.

Fast forward to 2009 and the chair the person was sitting on is empty and there's a pink beach towel draped over the porch railing. In 2010, there are newly bought plants in pots in the driveway. It's all pretty mundane and unassuming but it's worth a peek all the same.