Why is this West Bend home covered in terracotta tiles?

At 20 Jerome Street near Dundas West and Dupont, there's a house covered in weather-worn terracotta tile. Across the front, down the sides, and round the back hundreds of mismatched decorative reliefs make the building look like a displaced Asian temple.

The house was built by J. Turner Sr., a west-end Toronto builder in 1905. Terracotta tile had been in vogue in the decades before Turner set to work, but around 1895 tastes started to change and the material went out of fashion, leaving Ontario producers with stockpiles of unwanted product.

Turner's first house on Dundas West near Dupont - long since demolished for townhouses - was the first to take advantage of cheap excess terracotta in Ontario. He decorated the home with floral and lattice patterned tile and installed little flourishes on the lintels above the doors and windows. 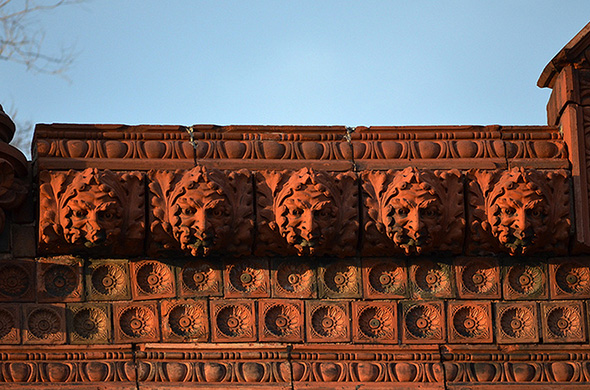 According to Terra Cotta-Artful Deceivers, a book published by the Toronto Region Architectural Conservancy, Turner's elaborate exterior may have been a way of advertising his construction business but "the display seems not to have had the desired effect," it says, somewhat ominously.

Turner doubled down and built a new home from scratch on nearby Jerome Street, this time leaving no space on the exterior for exposed brick. Many of the tiles he selected were intended for much larger buildings, the book says says, and, as a result, dominate the home. Repeated faces stare out along the roof line while a bust in an elaborate headdress takes pride of place a the centre of the facade.

The book calls Turner's eccentric design a "misuse" of the sudden excess of tile, but I love the eccentricity and sheer excess.