What can Toronto learn from Melbourne, Australia?

Next time you're squeezed inside a stationary rush-hour streetcar - and I bet you won't have to wait long - remember that Toronto isn't the only city with surface transit challenges. Melbourne, Australia, home of the biggest tram network in the world, is also grappling with dense traffic, but practical ideas are helping to get things moving.

Now that the city and the TTC are studying ways to improve streetcar service on King Street, a route that carries more people than the Sheppard subway, perhaps it's worth finding out how another major city handles its surface rail network.

Melbourne's tram system is roughly two-thirds bigger than the TTC streetcar network. It has 168 kms more double track - lines that run in both directions - and more than twice the number of vehicles, though some are decades old.

"Melbourne is the only city in Australia that retained its tram system in any meaningful way," says Ramesh Liyanagedera from Yarra Trams, the city's surface rail operator. "Trams occupy a bit of an emotional space with the Melbourne public; whether they travel by tram or not, Melburnians tend to love their trams." 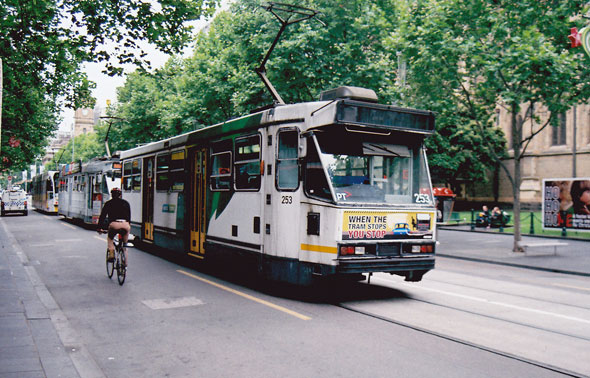 Speaking over the phone with Liyanagedera, the challenges faced by Australia's second largest city sound familiar: heavy traffic, poorly timed signals, and a fear of giving up on-street parking.

"There's a perception in Melbourne that car parking along major routes equals increased trade for the shops but we've actually proven that's not the case," Liyanagedera says. "It's far better to move a lot of people into areas than a select few in cars in terms of generating trade."

The sheer number of road users is also a problem, especially in the central business district. 80% of the Melbourne network operates in mixed traffic, which slows some routes to a crawl. Trams average just 17 km/h, slowing to 12 km/h in the core. In fact, a study showed Melbourne trams are moving just 65% of the time.

In an attempt to make traffic flow better the city has a several special road rules: no moving into the path of a tram, no stopping within 20 metres of a tram stop, and, most famously, the "hook turn," a traffic manoeuvre that requires vehicles turning right to use the far left lane to avoid blocking the tracks.

Drivers move as close as possible to the far corner, wait for the a green light on the street they are planning to enter, and then complete the turn. The Canadian equivalent would require drivers to turn left from the right lane.

Staff at Yarra Trams think separating trams from cars is the best way of improving service. Route 96, one of the city's busiest that runs from the beach at St. Kilda through the dense central core, is slated to become the Melbourne's first fully-segregated line in the next few years, and others are expected to follow.

Another idea involves installing traffic lights capable of turning green ahead of an oncoming tram, reducing wait times for motorists and accelerating transit. "The technology exists ... [but] it's not something that's been pursued very hard over the years because the road traffic authority who controls these matters hasn't been too interested in doing something about it," Liyanagedera says.

"I think Melbourne is going through a bit of a change ... there is a collective consciousness that trams help to revitalize and rejuvenate places that otherwise wouldn't be. And it's been driven from the public really, from the residents and public, not necessarily the politicians."