Imagine standing at the corner of Queen and Bay and being able to fast-forward through time from 1818 right up to present day. Two city halls, polar opposites in terms of design, would appear before your eyes, the mighty Eaton's department store empire would proliferate and crumble, and rows of industrial buildings would give way to luxury hotels and bank buildings.

Chris Olsen, a professional cartographer based in Redlands, California, has made that dream a reality with a gorgeous interactive map application. Released earlier this month, the Google Maps-style interface lets users explore maps of Toronto that date back almost two centuries.

"It really gives you a window into the evolution of the city," says Nathan Ng, who supplied some of the image files used by Olsen. "If you look at the area around Old City Hall and zoom through the years you can see how The Ward changed, and by 1947 it's all different."

Olsen, who works for Esri, a geographic information systems software company based in Redlands, California, has made similar maps of Cleveland and Pittsburgh in his spare time and was challenged to do something for Toronto by Ng.

Zoom out far enough and the patchwork is visible due to minor variances in colour and tone. 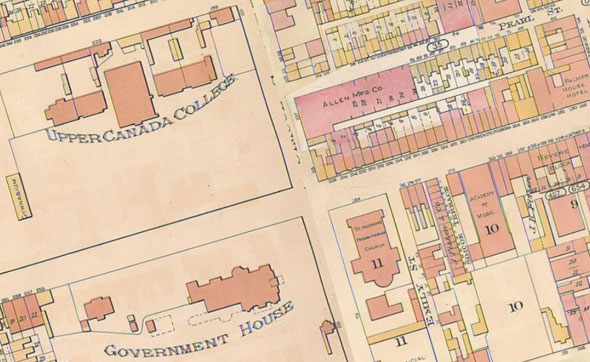 "The most time consuming part is putting the maps together because you're starting with just the pure image itself," Olsen says. It took about to six months to stitch the pieces together, make the map searchable, and work out numerous tiny inaccuracies, he says.

"Everything that I've done is out-of-the-box, there's no customizing or smoke and mirrors or anything like that."

The attention to detail is remarkable: Each map has been rotated to true north, which puts Toronto's streets at their correct oblique angle, and synchronized with an address search function. It's possible to find a location and adjust the slider to see how the neighbourhood evolved.

Take King and Simcoe. In 1818 it's a rural crossroads on the outskirts of town. By 1889, the arrival of Upper Canada College, Government House, St. Andrew's Church, and the bawdy British Hotel tavern has resulted in corners being nicknamed "education," "legislation," "salvation," and "damnation."

Jump ahead to 1924 and the block is dominated by rail sidings and factories; leap ahead again and King and Simcoe is the heart of the theatre district, home to Roy Thomson Hall and Metro Centre.

Every point on the map has its own story to tell. Try it for yourself