The history of the Spadina Hotel in Toronto

James Macdonald's farm in the community of Minesing, a tiny settlement near the shores of the Nottawasaga River, sold for a handsome price in 1885. The proceeds, an unspecified "large sum of money," was more cash than the 24-year-old had ever seen in his life, and he planned to guard it closely during his stay at what was then referred to as the Richardson House Hotel at King and Spadina.

On arrival, Samuel Richardson, the owner of the wooden three-storey building with its neat shaded windows and ground floor bar, warned Macdonald about the gas lights in the room. The young man wasn't accustomed to the technology of the big city. He had "never tasted liquor in his life," according to a newspaper report, and the room on Toronto's busy Spadina Avenue must have seemed a world away from his rural farmhouse near Barrie.

It's not clear what he planned to do with the windfall: perhaps buy a house, stash it in the bank, or split from Union Station for a new life away from the harsh winters of Canada.

Richardson explained how to extinguish the dim lights by closing the little metal tap but Macdonald didn't follow. He was too busy worrying about the cash. Before climbing in to bed, the young man bolted the shutters, securely fastened the window, and fell asleep with gas gently hissing from the darkened lamp.

The next morning Macdonald was found "insensible" from the fumes. "For several hours his life was in danger, but at midnight, though still insensible, he was able to raise his hand to his ear, and the two physicians have good hopes of his recovery," wrote The Globe. 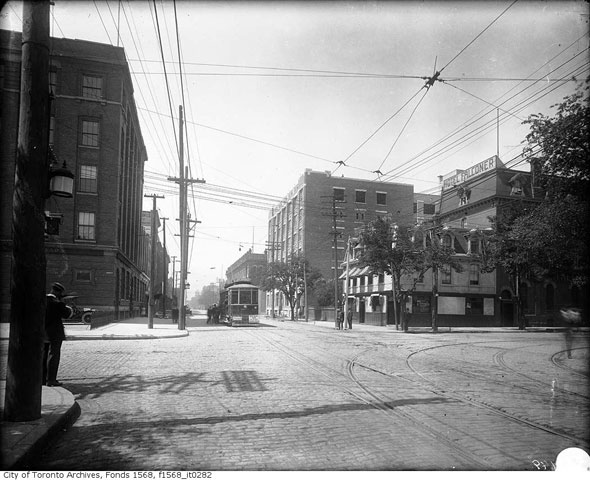 The story of James Macdonald's brush with death is one of the first printed mentions of the Richardson House hotel, now the BrainStation Toronto Campus. For a long time, the historic building was home to Global Village Backpackers.

Built in 1875, the original block of the hotel was operated for several decades by Samuel Richardson, a decorated military veteran from the 13th Hussars, a cavalry regiment of the British Army that fought skirmishes in The Peninsular War, Battle of Waterloo, and the Crimean War. Robert Baden-Powell, the founder of the Scout movement, served in the regiment in India.

His property "when necessary, could room nearly 100 guests," an early advertisement declared. Richardson added two brick extensions to the building, more than doubling its capacity and dwarfing the original corner structure, before hotelier Robert Falconer took over and renamed the hotel for himself in 1906.

The Falconer Hotel didn't last long, and it was renamed the Ziegler Hotel with another new owner seven years later. As the Toronto Sun's Mike Filey notes, the Ziegler name quickly vanished with the start of the first world war, possibly because of its Germanic-sounding name. 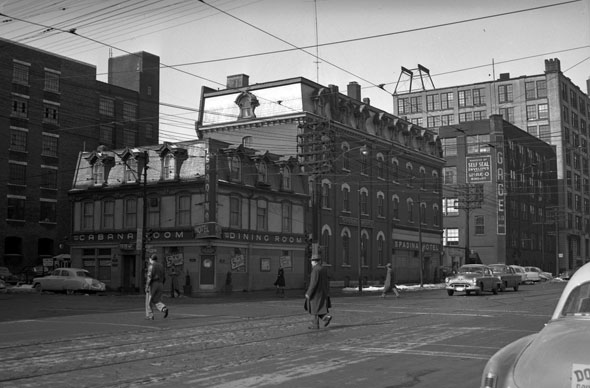 The budget Hotel Spadina emerged from the shadow of the Richardson, Falconer, and Ziegler, keeping its name in a slightly tweaked format - Spadina Hotel - until 1997.

The Spadina Hotel with its "good food," "five T.V. screens," and nightly music in the beach themed Cabana Room accommodated the Tragically Hip, Leonard Cohen, and the Rolling Stones and served (briefly) as a backdrop to the 1973 Jack Nicholson movie The Last Detail.

For bands like the Skydiggers in the 70s and 80s, the close quarters of the Cabana Room provided a much-needed springboard to wider success. The grimy interior was part of the same gig circuit that included Lee's Palace and The Cameron House.

The Spadina Hotel became one of Toronto's heritage assets in 1985. In 1997, a $250,000 renovation stripped out the many of the timeworn fixtures and faded bar furniture for bunk beds, communal bathrooms, and shared kitchens and returned the building's focus on cheap accommodation.

When it opened, Global Village Backpackers was the largest hostel in downtown Toronto—a title it passed on for good only a few years ago.

Now, the iconic and historic spot is open as an innovation hub operated by the Konrad Group. As the space enters the futuristic age of tech innovation, its incredible to look back and see just how old this building is. 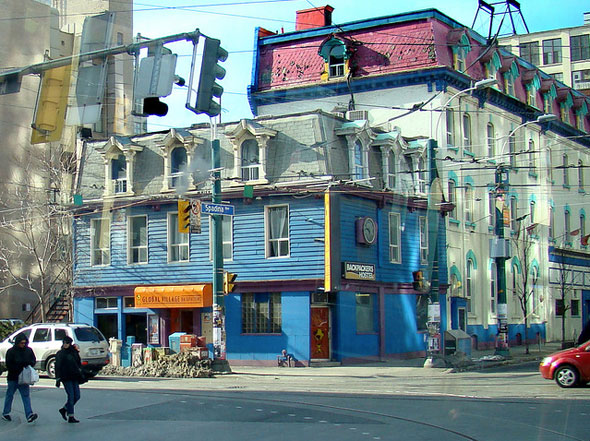