A massive ice storm has hit Toronto, leaving roughly 250,000 without power and disrupting all streetcar service in the city and the Scarborough RT (as of 8:30 a.m.). Toronto hydro estimates up to a 72 hour wait for those currently without service, while the TTC has yet to determine when streetcars will once again return to the streets. Widespread delays and cancellations have also been reported at Pearson International, and travellers are advised to check all departures before heading to the airport. GO Transit is also struggling with service interruptions. 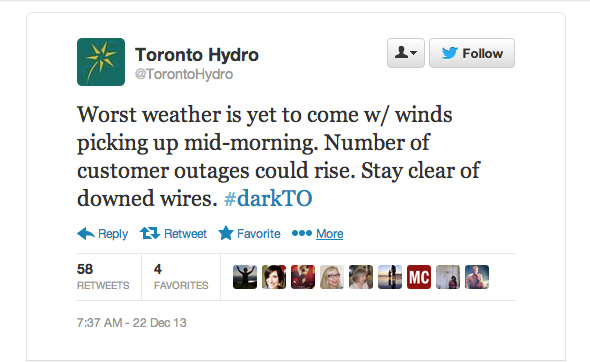 While the freezing rain is forecast to taper later this morning, increasing winds could cause further outages as ice covered trees and power lines are put under additional stress. "This has the potential to be the worst ice storm in decades across the GTA... the only question is how much and what impact this has on the electrical grid," said Weather Network meteorologist Chris Scott.

The storm peaked late Saturday leading into the overnight period, during which time a thick layer of ice has formed on all manner of surfaces across the city. Toronto Hydro has not pinpointed areas that have been hardest hit, saying instead that outages are distributed across the city. They have yet to update their outage map, which currently reports only modest blackouts across the city.

Check out photos of the storm and its aftermath here.

Do you have your photos of the storm? Tag them on Instagram with #iceTO or add them directly to our Toronto Ice Storm gallery.

Photo by Jonathan Ponce in the blogTO Flickr pool.