Giant Mirvish + Gehry condos could be cut down to size

Frank Gehry's bold concept for three massive condos on King Street West could be trimmed through discussions with a new working group set up at yesterday's council meeting. Council voted down the current proposal for three high-rise residential towers, opting instead to establish a special 14-member group to prevent the project going to the Ontario Municipal Board.

The working group to be chaired by local councillor Adam Vaughan will consist of "prominent Torontonians" and help resolve concerns from local residents over height, density, and the impact its 2,709 units would have on the already strained public transit in the area.

In a presentation before city council, chief planner Jennifer Keesmaat showed a revised version of the three towers that had been reduced to "a more appropriate scale and more proportionate to the surroundings" - 60, 55 and 50 storeys from east to west, down from 82, 86 and, 84 storeys.

The alternative development concept (shown above,) which was not created with input from David Mirvish or Frank Gehry, also preserves the heritage warehouses currently on the Entertainment District site, buildings the original plans proposed to demolish. 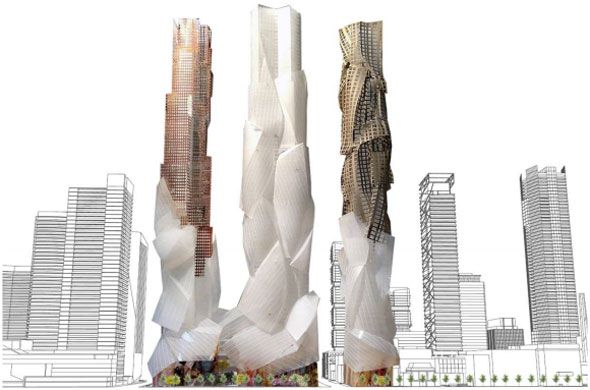 Adam Vaughan told the Star the panel will seek "a way to say yes" to the proposal, which also includes an art gallery and a new campus for OCAD University. The group will hold at least one public meeting and will report back to council in March 2014.

Meanwhile, an OMB pre-hearing is scheduled for January.

What do you think of the scaled-down proposal? Do the towers propose an excessive level of density for King West?