Garrison Point Condos, a new urban-esque master community north of Fort York, is promising a new way to live for the rarely considered downtown family. The developers have produced a commercial (it's actually pretty funny) reminding us that we are not the only ones pining to escape the suburban monotony. But is this vertical suburb really much better?

Located on a huge swath of land that plans to fill the high rise hole between CityPlace and Liberty Village, Garrison Point, will eventually cover a triangular 7.6 acre area from Strachan Ave to the west to the CP/GO Transit Georgetown rail line to the north and the CN/GO Transit Lakeshore rail line in the south. The first phase at 30 Ordinance Street will consist of two Hariri Pontarini designed residential towers totalling 629 units.

The 27 and 32 storey buildings will also include a pedestrian promenade that will connect the complex to a 3.9 acre Claude Cormier designed park. The park, which will be open to the public (that is if you can manage to get around the train tracks,) plans to bring new life to this now defunct industrial site. This massive new green space will include a much needed connection to the Fort York pedestrian bridge and also includes an Olympic sized pool where it appears you'll be able to easily wave to passing commuters.

This project isn't all residential though: phase two includes three additional towers standing at 23, 29, and 49 storeys includes two or three floors of commercial and retail space in each building. In an area that could really use it, the overall plan also hopes to create and expand the retail presence on the surrounding blocks and create a promenade along Strachan Ave. When it comes to transit, those who aren't planning on hopping on the top of any nearby trains might find the area lacking, especially for this many new residents. The possibility of a Downtown Relief Line station here or somewhere nearby is still a good possibility and certainly might cut down on the isolation factor. 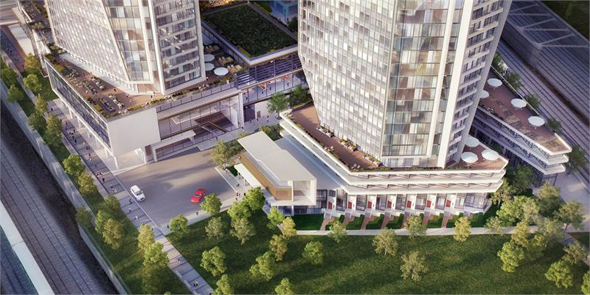 As easily as this development might be compared to nearby Liberty Village model, even if these very early rendering come close to what they appear to show, it will indeed be miles ahead aesthetically. The Claude Cormier Park is also a huge bonus and promises to be something quite a bit more in-depth than your run of the mill grass parkette; which are all too often used to apologize for other condo projects.

The interiors here although not overly interesting, appear to show a bit of a maturity and simplicity that we rarely see in early renderings. And even though there is no way to tell at this point whether these towers will indeed be as family friendly as promised, the fact that the developers are making a point to reach out to families is a refreshing sign. Or perhaps a good way to find buyers in a slowing housing market? 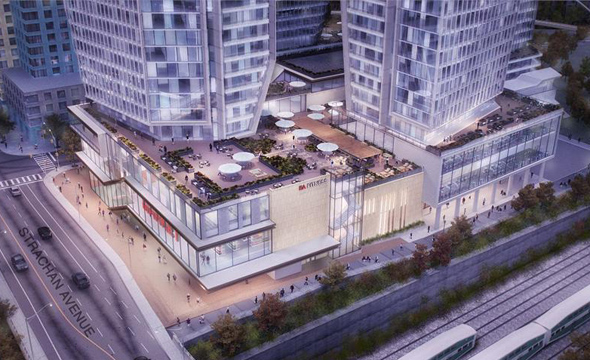 Even though the park space is certainly going to be stunning, your picnics might be filled with the smell of the adjacent slaughterhouse, or perhaps the roar of passing trains or hum of highway traffic. Isolation also is potentially a big problem here. If the planned pedestrian bridges aren't executed well, or more effective transit isn't built, you (and your thousands of very close by neighbours) might get a bit lonely. Learning how to make long term viable mixed-use communities has been an uphill battle in Toronto. While the retail and commercial aspects are nice, they just might not be enough in the long run. The master planned design seems eerily similar to the residential tower surrounded by a park popularized in the 70s across the GTA â is this really so different?

The loss of these employment lands coupled alongside the possible over-development aren't highlights here, but the initial designs promise something a little different. The park is also a great addition to the area and is really an excellent alternative to sending your kids to play in the nearby train tracks. 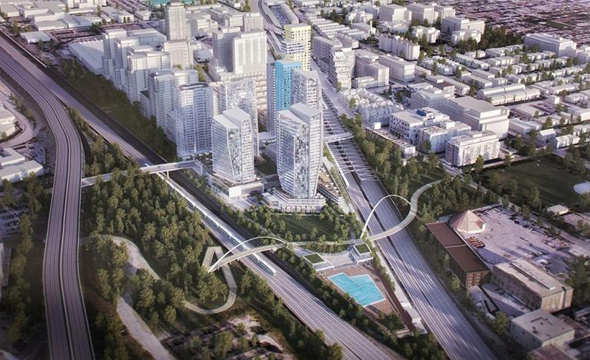 Read other posts in this series via our Toronto Condos and Lofts Pinterest board..