A major downtown street could be transformed in to a haven for pedestrians, cyclists, roller skaters, and other forms of non-motorized transportation next summer thanks to $180,000 of provincial cash.

The grant money, awarded for a "community building and social engagement exercise" tied to the 2015 Pan Am Games by the Ontario Ministry of Tourism, Culture and Sport, is being used to develop an "open streets" program - also known as a "ciclovia" - in Toronto and three other Ontario cities, Windsor, Kingston, and Thunder Bay.

The planned event, similar to ones held in Ottawa, New York City, Chicago, Mexico City, and Guadalajara, would close a major street to traffic and open the road up to pedestrians, cyclists, yoga classes, dance lessons - anything that promotes healthy activity and community building.

8-80 Cities, a Toronto-based non-profit that promotes healthy forms of transportation and outdoor recreation, and councillor Kristyn Wong-Tam are the driving forces behind the idea, and both hope to have a trial event over four weekends in 2014.

"It's a very exciting proposition because we know that it has worked in other cities very successfully and it's extremely participatory in nature. Anybody can get involved," Wong-Tam says.

"It enables communities to take advantage of a time when we don't have the money to build new swimming pools or build new community centres. We're using existing infrastructure and we're allowing for different types of uses, so it's much more flexible and I think in many ways it's efficient." 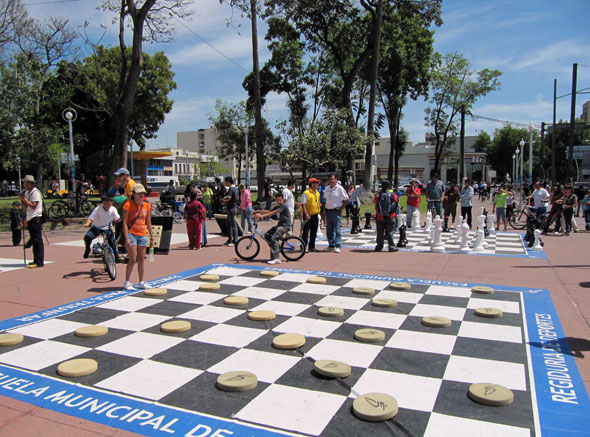 Despite backing from the province, the Toronto open streets concept still needs funding. Policing is one of the highest costs associated with each event - sometimes more than half the total budget - and 8-80 Cities are looking for a commitment from the city as well as sponsorship from groups like Maple Leaf Sports and Entertainment that have a focus on active events.

8-80 Cities and Kristyn Wong-Tam also have to decide where they would like the event to happen. Open streets work best on principal roads that pass through a broad range of neighbourhoods, says Paul Kulig, the architect and transportation expert working with 8-80 Cities to select a location.

"We're looking for iconic streets," he says. "We want a street that's got the institutions, that's got the play ... the short version is: 'if it's not on a postcard nobody wants to use it.'"

The streets Kulig says fit the bill are Yonge, Bloor-Danforth or Lake Shore Blvd. Typically, open streets events "soft close" a street over 10 kilometres. On Yonge, which seems like the most obvious candidate, that would mean closing off access to cars from the waterfront to around Lawrence Avenue although traffic would still be able to use major intersecting roads during the event.

There is some precedent for using Yonge Street. It's well served by public transit, crowded with foot traffic, and is one of the city's most famous roads. It was also the backdrop for a pedestrian mall that ran from 1971 to 1974 between Wellington and Gerrard. At the time, 78% of stores found it good for business.

As reported earlier this year, the removal of motorized traffic and program of special outdoor events would take place on consecutive Sundays, ideally over the course of the summer.

"Even though it's a very simple concept, it's not something that's simple to make happen, politically especially," says Emily Munroe from 8-80 Cities. "For it to be an effective program you really want it to be something that reaches from one end of the city to the other and connects a wide range of communities."

"In broad strokes, it would be something that's at least 10 kms on a really lovely, iconic, people-friendly street where there's lots of exciting highlights from Toronto: wonderful parks, museums, cultural spots, galleries, shops, that type of thing."

There are still plenty of hurdles for the open streets event to overcome, but none that pose a insurmountable obstacle to the idea, she says. Toronto's relatively flat terrain, wide streets, and subway system are all selling points.

"Every city has challenges, I certainly wouldn't say Toronto has any more challenges than any other city," Munroe says.

A staff report on the subject is currently being bounced around departments but is due before 2014.

Do you like the idea of a regular open streets event? Are Yonge or Bloor/Danforth the best options?