That time when Murdoch Mysteries went to sea

Murdoch Mysteries kicks off its new season on Monday night with a salty sea-bound whodunit that not only showcases how polished this homegrown chestnut has become during its seven years on air, but also serves up a slice of legit historical Canadian rolled gold - the S.S. Keewatin, last of the great lakes passenger steamships.

In "Murdoch Ahoy", erstwhile Toronto police detective William Murdoch (played as always with great relish by perennially smiling ladies man Yannick Bisson) and his guv'nor the craggy ginger Inspector Brackenreid (Coronation Street veteran Thomas Craig) are called in to investigate when the maiden voyage of the S.S. Keewatin comes under threat after a Death and the Maiden card is delivered to the ship's greedy industrialist owner. Opting to stay aboard during the trip, it's not long before murder, sabotage and Rubik's cube-shifting motives distract Murdoch from his true passion - Dr. Julia Ogden (the ever classy Helene Joy). 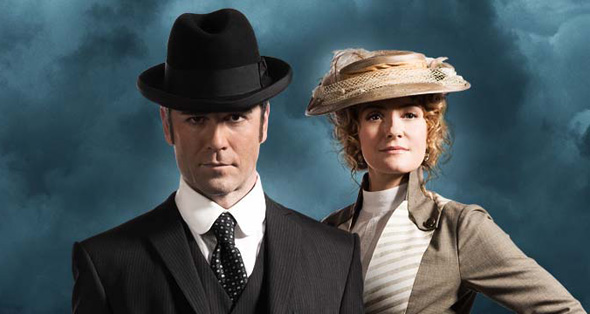 While the series always felt awkwardly out of place amongst Citytv's trash glitterati reality shows and sub-CW teen dramas, it fits like a glove on CBC - pure maple flavoured chicken soup for the Canadiana soul.

Over the past seven seasons Murdoch has ardently mythologized turn of the century Toronto lore, turning the aged stuff of dusty books and battered 16mm classroom films into spritely produced drama in the style of Downton Abbey by way of CSI dashed with Doctor Who, possibly with a streak of MacGyver for good measure.

Initially based on the series of Murdoch Mysteries books by Maureen Jennings, local production company Shaftesbury Films have taken her cue and run with it, creating a globally recognized, cult TV brand which shows no sign of powering down anytime soon - surely a rarified feat in Canada (not including non-genre stuff like Degrassi, The Littlest Hobo or Trailer Park Boys).

By embracing and exploiting its Toronto roots as a setting, the city has become as central a character to the show as Murdoch himself: "Murdoch Ahoy" opens with the doomed passenger liner S.S. Keewatin leaving Toronto Harbour, with a historically accurate St. Lawrence Market computer generated seamlessly into the background. Using the actual S.S. Keewatin as the stage for this mystery was a stroke of genius, although its very existence in 2013 is another yet fascinating historical anomaly...

The S.S. Keewatin was built in Scotland for the Canadian Pacific Railway and delivered to the Great Lakes in 1907, were it dutifully served as a railway link connecting Georgian Bay and upper Lake Superior railheads for over six decades. When in the mid-1960s its sister ships were either scrapped or long sunk, the Keewatin escaped a similar unkind fate when it was purchased by an eccentric Michigan collector who brought Keewatin to the small town of Douglas, Michigan ultimately docking on Lake Kalamazoo.

Purchased by Skyline Hotels & Resorts in 2012, an equally eccentric ex-Keewatin waiter by the name of Eric Conroy brought the ship back to its home at Port McNicoll, the once thriving Ontario hub which served as the western terminus of the CPR's Georgian Bay and Seaboard Railway, connecting to its Ontario and Quebec Railway, near Bethany . (Conroy has a guest appearance in "Murdoch Ahoy" as the ship's Captain).

As the Keewatin is the last of the Classic Edwardian passenger liner still in existence, older even than the much more prolific S.S Titanic, its 1900-era aesthetic is a century old set frozen in amber. "Murdoch Ahoy" takes full advantage of this almost otherworldly place, following the action from the vast expanse of the open decks down to the tiny cramped corridors in steerage to the industrial era majesty of the engine rooms.

Comparisons to select scenes in James Cameron's Titanic are inevitable, but the last laugh is that it took the CBC to do something neither Mother Nature nor force majeure could muster - sink the mighty S.S. Keewatin.

The S.S. Keewatin is open for tours every day from 9am - 4pm in Port McNicoll