Walking along Shaw St. north of Dupont the other day, I spotted a City of Toronto Development Proposal notice that caught my eye. Sobey's, it would appear, has grand designs for the lot that it owns at the northwest corner of these two streets, which is currently home to a reasonably sized grocery store and rather modest parking lot. In place of this, the company envisions two 11 storey condo towers, composed of 393 residential units and two storeys of street level retail and commercial space, a development which would be accompanied by a whopping 734 parking spaces.

The proposal is in its early stages, but it brings up some interesting questions about the neighbourhood. Is this section of Dupont ready for a development of this size? Although the height of the condos is anything but exorbitant, the scale of the proposed development is far larger than much of the rest of the Dupont corridor, which remains downright sleepy through some sections. 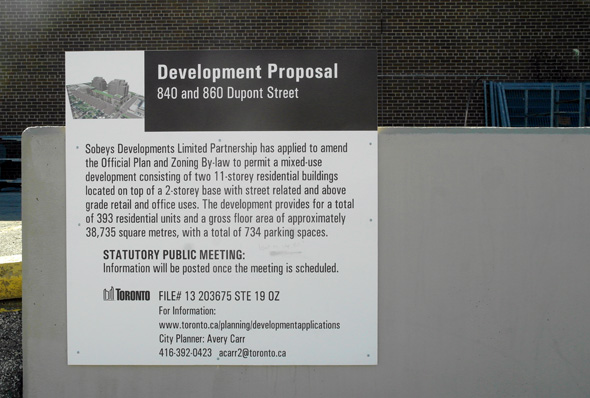 In considering a rezoning proposal for 555 Dupont last year, councillor Adam Vaughan spoke of the need to be cautious about development along the street. "It's a concern, because quite clearly, when Loblaws went in [at Christie and Dupont], it has a major impact on the traffic in the neighbourhood." Speaking to Yonge Street Media, the councillor explained that he hoped "to get a visioning study of the area as it runs from Avenue right across to the top of Ward 19. We'd like to do a unified streetscape."

How this new proposal would fit with such a unified vision is difficult to imagine, but one suspects that a project of this sort might usher in more rapid development of a strip that seems poised for condo housing. While signs of Dupont's industrial past remain in spots, the street has gentrified significantly over the last decade, and you can bet that it would be a cinch to sell the nearly 400 units under the Sobey's proposal.

Traffic flow around Dupont and Ossington, already a bottleneck during rush hour, would likely degrade to annoying levels with the construction of this development, but one can also see the streetscape revitalized by the presence of mixed retail. In other words, it's an interesting proposal to mull over. A statutory public meeting is to be schedule in the coming months. What do you think? Would this development be a good thing for the Dupont corridor? 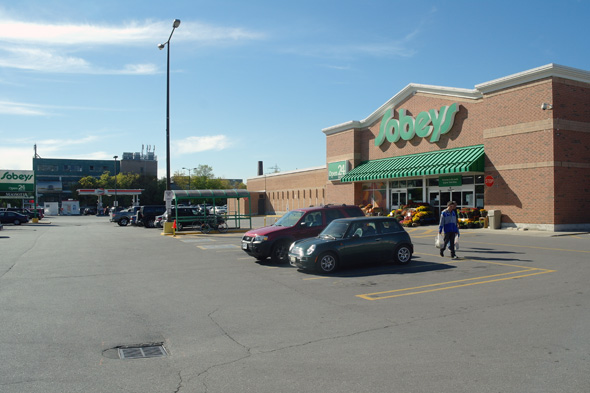