The federal government has promised $660 million for a Scarborough subway extension to Sheppard Avenue, seemingly putting the troubled project on the best track since the latest round of talks began.

"You have our money, let's get this subway built," finance minister Jim Flaherty told a press conference at Don Montgomery Community Centre near Kennedy station, flanked by Stephen Harper, Rob Ford, and several city councillors. "Our money is real, our money will flow, our government is solid."

The government came to the table after Rob Ford wrote a letter, Flaherty said, although it was probably more likely city manager Joe Pennachetti.

There are, of course, plenty of unanswered questions: the various LRT cancellation costs, sunk costs, and the additional money it will require to keep the SRT running have not been factored in yet, it seems. 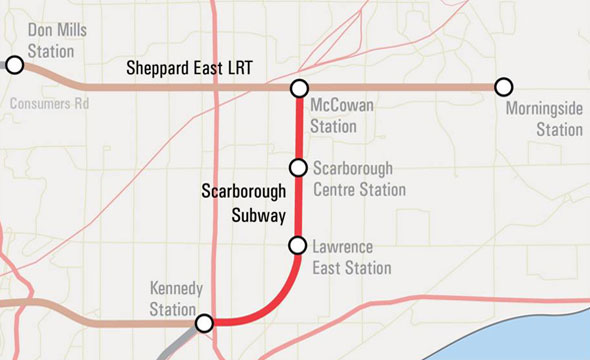 The map Flaherty used a his presentation shows the subway connecting with Sheppard LRT at McCowan, which suggests the light rail line is also looking more solid. That maps also breaks from the route the province backed, which followed the old SRT route and ended at Scarborough Centre.

There are also questions around how the city will react to the cash injection. The province's share of the funding, $1.4 billion, and today's promise from the feds, $600 million, provides $2 billion. In July, the city set a deadline of September 30 for $1.8 billion from the province and 50% of the capital costs from the federal government.

A report from Joe Pennachetti at the time said the city would have to hike property taxes 1.1% over three years, with a minimum 0.5% increase in 2014 to cover its share.

Doug Ford says the subway could be up and running by 2022 with "shovels in the ground within a year or two." "Another promise made, another promise kept," said the mayor.

Is this a win for the city?