By the numbers: Toronto Water

Pipes have dominated Toronto's news lately. In July, a massive, unexpected storm tipped billions of litres of water over the city, exposing a possible weak link in the city's ability to handle a wet weather crisis. This week, a heavy rain shower briefly overwhelmed storm sewers, turning several streets in to raging rivers.

Making sure rain is safely channelled down drains, through sewers, and in to Lake Ontario without erupting through a manhole cover or drowning an underpass is a mammoth task, especially when much of the city is covered in impermeable concrete. That's where Toronto Water comes in.

Created along with Metropolitan Toronto in 1954 and expanded by the merger of several former city departments during amalgamation in 1998, Toronto's water supplier is entirely rate supported, meaning water bills fund the entire operation. No reliance on property taxes.

As much as it's responsible for taking away rain, Toronto Water is also tasked with delivering 493 billion litres of clean drinking water to the 3.5 million hook-ups in the city and parts of Peel region, then ferrying the remaining 438 billion litres of wastewater away through sewer pipes. 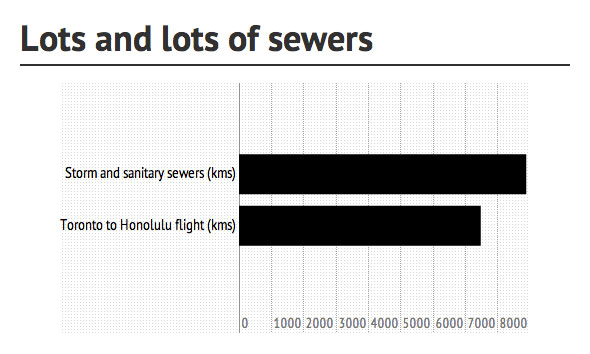 The supply and removal operation takes a significant amount of money - $394 million in 2013 - and some serious infrastructure. Laid out in a curving line, Toronto's storm and sanitary sewers would stretch 8,884 kms to the middle of the Pacific Ocean, just beyond Hawaii. The sewage system comprises 151,485 access holes, 82 wastewater pumping stations, 5 storage and detention tanks, and 4 wastewater treatment tanks.

Toronto's average daily water consumption is a remarkable figure, too. To date in 2013, the system has delivered on average 925.87 megalitres - that's 925.8 million litres - each day. Providing refreshing water and cool showers on the biggest day of the year so far - July 17, the middle of the early-summer heatwave - required 1.3 billion litres of water. 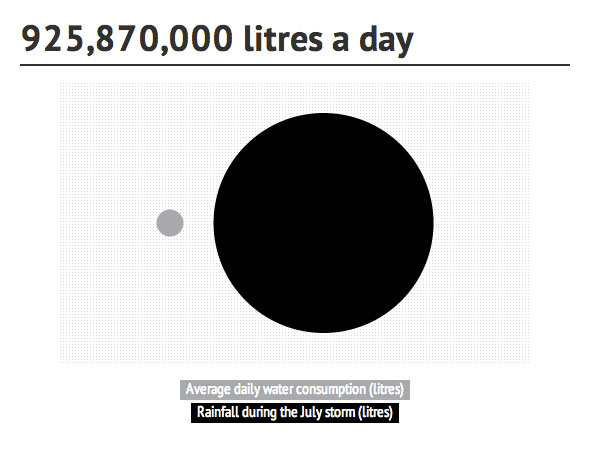 All that crystal clear, ready-to-use water needs a sprawling delivery system that's entirely separate from the sewage operation, of course. 6,014 kms of delivery and distribution watermains - 1,000 kms longer than a direct flight from St. John's, N.L. to Victoria, B.C. - send treated drinking water around the city, helped by 18 pumping stations. The most famous, the R. C. Harris plant at Queen and Victoria Park, provides 34% of the city's drinking water.

Toronto's water supply comes directly from the frigid depths of Lake Ontario. It's treated, disinfected, and fortified with fluoride. The city has been adding the substance to its supply since 1963 because it helps reduce tooth decay. The amount is kept below Canada's health limit of 1.5 mg/L.

Constant automatic checks for over 300 recognized pollutants ensure our tap water is always safe to drink. Something to think about over your next glass of Toronto's finest.