A new chapter may be about to unfold in the epic saga of the Bloor Street bike lanes. Prompted by emails from residents and advocacy groups, a group of councillors is asking city staff to reume a halted environmental assessment into curb-separated bike lanes on Bloor from Sherbourne to Keele.

"The conversation around bike lanes and completing the bike network in the City of Toronto is an ongoing one, it seems to be forever evolving," says Cllr. Kristyn Wong-Tam, one of the signatories. "That's what the letter does, it basically asks staff to start the [environmental assessment] process one more time."

The assessment would delve in to the merits and possible disadvantages of bike lanes on one of downtown's busiest east-west arteries, covering the effects on turning, intersections, businesses, and other elements of the street.

Six members of city council whose wards cover Bloor - Ana Bail達o, Mike Layton, Pam McConnell, Gord Perks, Adam Vaughan, and Kristyn Wong-Tam - signed the request asking city staff include the lanes on their list of transportation projects for 2014 in May. The item was deferred until after the summer break at city hall. 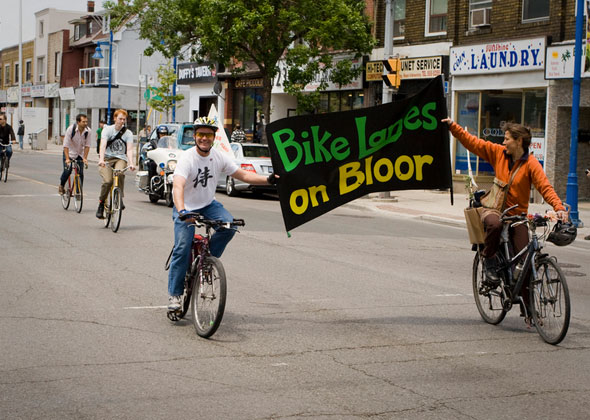 Despite annual rides in support of more cycling infrastructure on the street, there has been no official movement on Bloor since the incomplete environmental assessment was binned in July 2011 with the Jarvis Street lanes.

Now, more than two years later, Jared Kolb from Cycle Toronto is "cautiously optimistic" council will vote to resume the EA, even if the cycling advocacy group would prefer an investigation that covers the Danforth as well.

"What we're saying is 'that's not quite enough,'" he says. "We would much rather see the original terms of the EA brought back, which was for the entire corridor of Bloor-Danforth, and we are also pushing for a pilot project ... we don't need to wait around for a multi-year EA."

That pilot project, visualized above, would involve converting the south side of Bloor at the Annex in to a fully separated bike lane at the expense of street parking. The results would be measured and used to inform future policy, Kolb hopes. At time of writing almost 800 people had signed a Cycle Toronto petition in support of resuming the assessment.

"I think it's really important to note that there is a difference between 'let's put these bike lanes in tomorrow' versus 'let's study the feasibility, let's determine the impact, let's determine the best type of lanes,'" cllr. Wong-Tam says. "All of that will come out of the environmental assessment."