50 famous people with keys to the city of Toronto

Two Mickeys have the key to the city (Rooney and Mouse) but only seven women have received the honour, just three of them from Toronto. Contrast that with the 62 men from around the world who have a key sitting in a special wooden presentation case in their home or office.

The keys themselves are made of gold-plated zinc for the City of Toronto by North York Trophies and Promotions and cost around $80 each. The city keeps a stock of blank keys ready for engraving when the mayor announces a presentation, says Cece Metcalfe, the owner of the store.

The precise number of key recipients is actually difficult to place. In 2003, Mel Lastman gave one to the entire population of Prince Edward Island as thank-you for their support during the SARS crisis, which included a free truckload of oysters.

The city records only date back to amalgamation in 1998, and other former cities may have previously handed out their own keys. 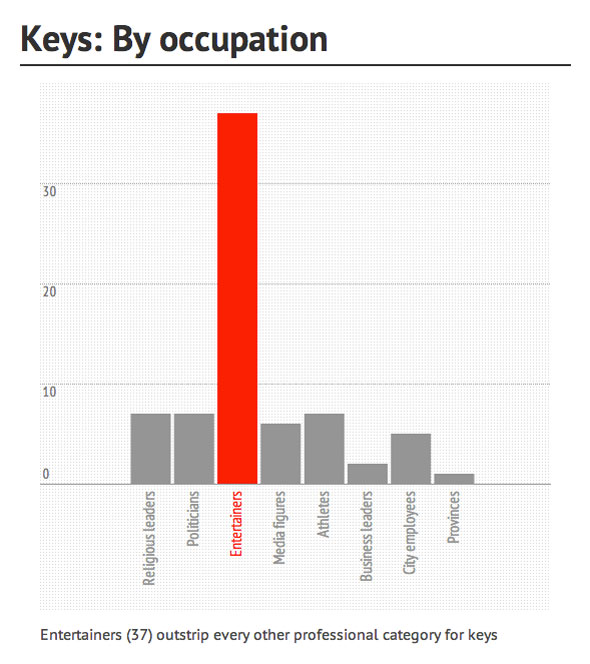 According to the City of Toronto, the presentation of a key is entirely at the discretion of the mayor and isn't subject to any formal guidelines or protocol. The trophy itself is meant to symbolize becoming a "freeman," a throwback to medieval times when a person of significant standing graduated from serfdom and was allowed to own land and run a business.

So far Mel Lastman has been the most generous, giving out 95 per cent of the keys since 1998. A plan to give the Spice Girls a key turned sour when the group refused to perform at a free outdoor concert the city had started (perhaps prematurely) planning.

David Miller and Rob Ford, on the other hand, have given out just five trophies between them. Upon receiving his key today, Doug Holyday will become the second deputy mayor, after Case Ootes, to receive the award.