By the numbers: The 2013 Toronto Flood

Now that the worst of the water has drained away and the city's infrastructure is (almost) back to normal, now seems like a good time to take stock of Toronto's biggest ever rain event. In the minutes after the surprise deluge began, thousands of buildings went dark, the subway ground to a halt, and major highways, local roads, and underpasses disappeared beneath the murky brown water - all in time for the evening rush-hour.

Using the data that's currently available (there's still a lot of tallying going on) it's possible to get a sense of the storm and its effects. The fact that there were very few injuries is a symbol of the lessons learned from Hurricane Hazel, Toronto's deadliest natural disaster made worse by poor city planning. 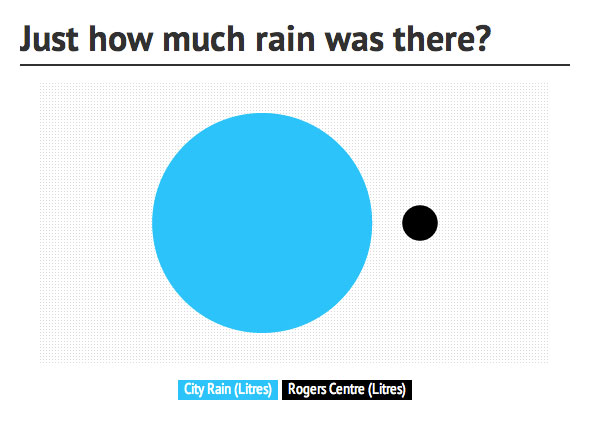 The sheer amount of rain that fell on the Toronto is absolutely staggering. Using precipitation figures for downtown and the number of square metres in the city limits, it's possible to estimate around 61,110,000,000 (61.1 billion) litres of liquid fell from the sky. By comparison, the Rogers Centre, closed and filled to the top of its domed roof, would only hold 1,600,000,000 (1.6 billion) litres.

A giant would need to use the stadium as a bucket (and the roof as a cup) 38 times to bail out all of the rain were it gathered into a single sprawling lake. That body of water, by the way, could cover an area of 630 square kilometres to a very shallow depth. 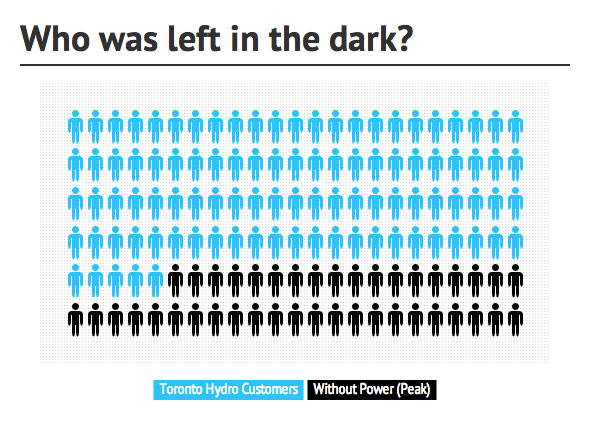 At the peak of the deluge around 300,000 Toronto Hydro customers were without power, almost a third of its 709,000 subscribers. It's important to note the term "customers" doesn't equal people: an apartment building and family home both represent just one subscriber, the company says.

Also on the rails, a Richmond Hill bound GO train became trapped just south of Pottery Road amid rising Don River flood waters. 1,400 people (and 1 Northern water snake) were on board by the transit agency's estimate. 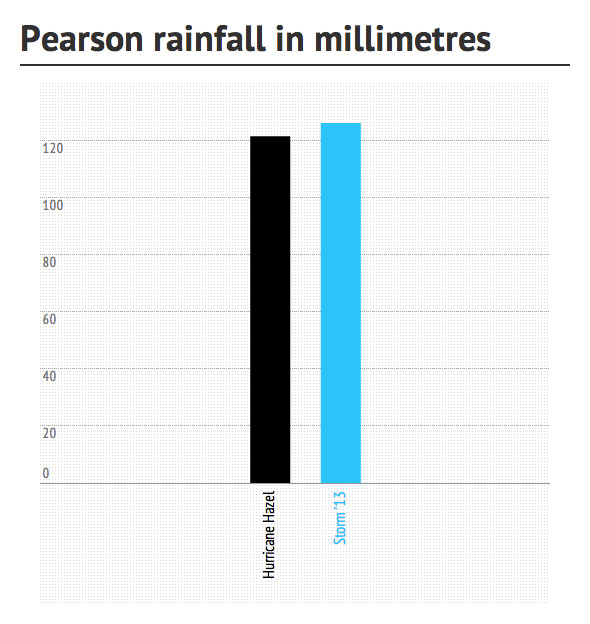 In terms of calls for help, the city's non-emergency 311 line received more than 1,000 notices about flooded basements. Figures aren't yet available for 911 calls, though emergency services said they experienced a high volume of requests for help.

It's tough at this stage to put a dollar figure on the damage. The latest estimate pegs it at well above the $600 million clean-up cost from the 2005 tornado. In unusual losses, a high-flying employment lawyer's Ferrari became swamped in the Dufferin underpass and inspired a fake Craigslist ad.

As a bonus feature, here's a look at the rain for the entire GTA (the graph above is only for Toronto) compared with the Rogers Centre capacity. Yikes. 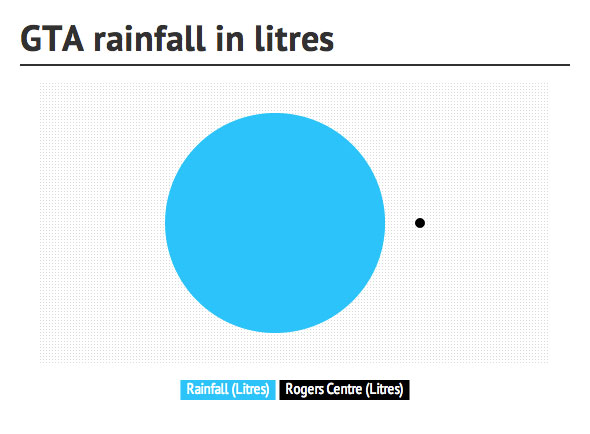