$50 million makeover on the way for 1 Spadina Crescent

The University of Toronto is hoping a $50 million restoration and expansion of One Spadina Crescent will help the long-neglected building slough off its reputation as an gloomy outpost marooned in the middle of a busy traffic circle.

Under plans officially unveiled this morning, a new 50,000 square foot structure named to honour $24 million in donations from developer and philanthropist John H. Daniels and his wife Myrna will fill in the neglected and underused area behind the existing gothic revival icon, creating a new space for various architecture, city planning, and urbanism programs. 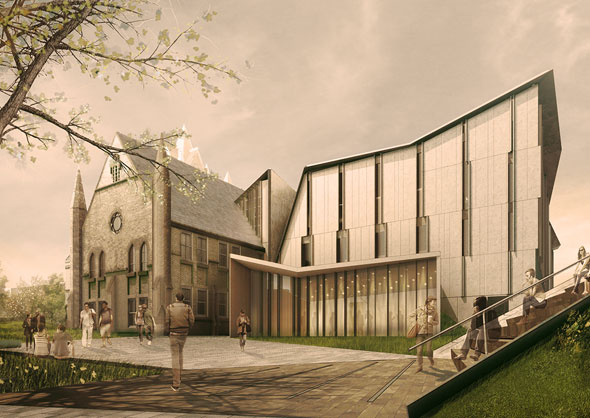 The project will be built in two phases, starting "within weeks," according to Richard Sommer, Dean of the Daniels Faculty of Architecture, Landscape, and Design at the University of Toronto.

In all, the expansion will double the current floor space to 100,000 square feet and provide a new library, art gallery, and design studios for the architecture school. Many of these features will be publicly accessible.

For non-students, a public walkway though the centre of the Daniels Building will serve as an extension of Russell Street. New crossings on both sides of the circle will improve access to the building, which for a long period was only accessible to pedestrians provided they were willing to jaywalk across a busy road.

A new streetcar stop is on the cards but hasn't been worked out between the university, the city, and the TTC. 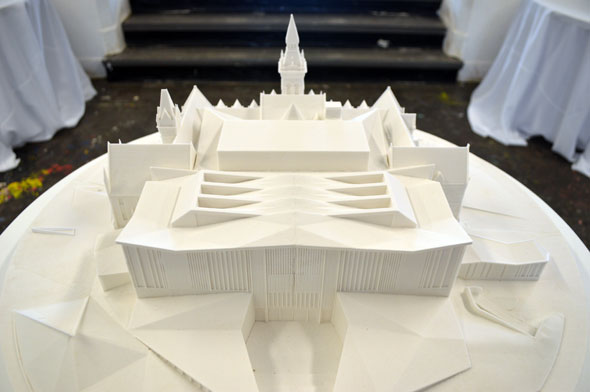 Designed by Nader Tehrani and Katie Faulkner of the Boston-based firm NADAAA, the Daniels Building will include many unique environmentally-conscious features. The roof is angled to collect and recycle rainwater for irrigation; the figure-8 windows and large open north wall collect natural light, cutting down on energy costs and providing a window from the street.

The most visible work will take place on the north side of the building facing towards Bloor. Now a scrubby parking lot with a collection of decaying wood and brick buildings, the site will be completely cleared and new a new collection of external green-roofed pavilions built in its place.

The main part of the new glass, stone, and steel contemporary addition will fit Tetris-like into the rough courtyard area behind the historic structure and be surrounded by a cyclist and pedestrian orientated road. 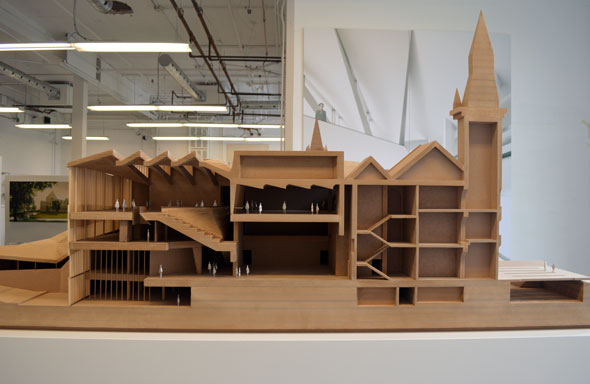 The 138-year-old gothic revival building that terminates the view up the lower portion of Spadina Ave. was built by the Presbyterian Church as a theological college in 1875. Before that, the land was briefly earmarked as a location for a proposed city park after the death of Dr. William Baldwin, the broad avenue's founder.

Smith & Gemmell, the building's architects, are also responsible for the Noble Block on the north side of Queen West, just east of Spadina, the Sherbourne Methodist Church, and a handful of small homes in the city. Strangely, the pair didn't think to include any indoor bathrooms in their original design.

Knox College joined the University of Toronto in 1885 but just 30 years later moved to its currently location off St. George St., leaving the sprawling building without a clear purpose. 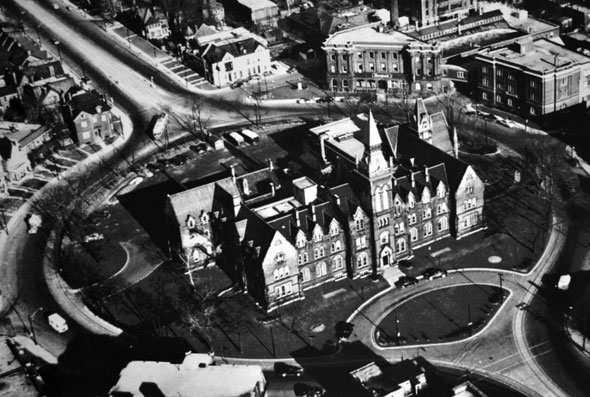 Since then it has variously housed a first world war military hospital staffed by a team of nurses that included aviator Amelia Earhart, a medical research lab that produced insulin and penicillin, and the Eye Bank of Canada, famous for its storeroom that was once packed with eyeballs awaiting transplant.

More recently One Spadina Cres. has housed the university's visual arts program and the alternative student newspaper, The Newspaper. It made headlines in 2001 as the location of the brutal unsolved murder of professor David Buller, and again in 2009 when a 29-year-old female ghost hunter fell to her death from the roof.

In recent years the building has lain partially vacant.

The stretch of Spadina Ave. north of College was also in the news last week when a plan to demolish and redevelop the Waverly Hotel and Silver Dollar in favor of student accommodation was announced by the property's owners.

The University expects the new restoration, extension, and detailed landscaping to wrap by late 2015 provided it can raise the last $24 million to fund the project. What do you think of the designs? Does the modern new look compliment the original gothic building? 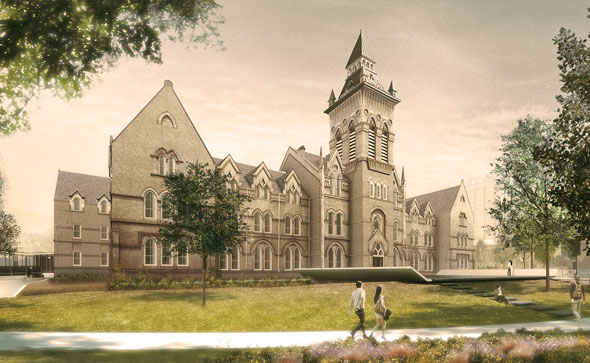 The view from the south

Seating looking into the main hall 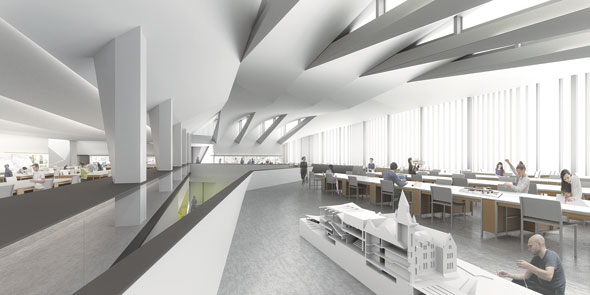 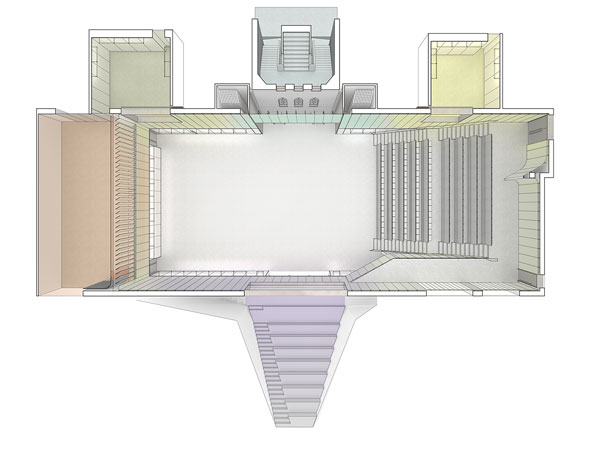 Aerial view of the main hall 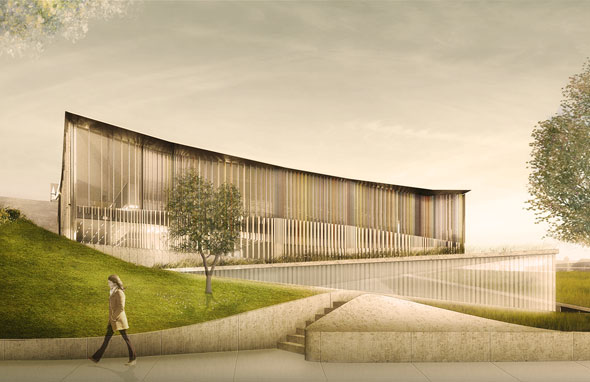 Another view from the north 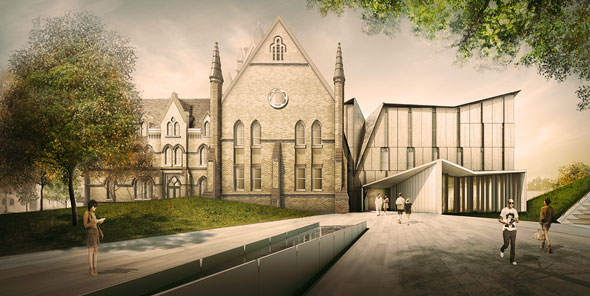 The view from the west

Study area in the Daniels Building 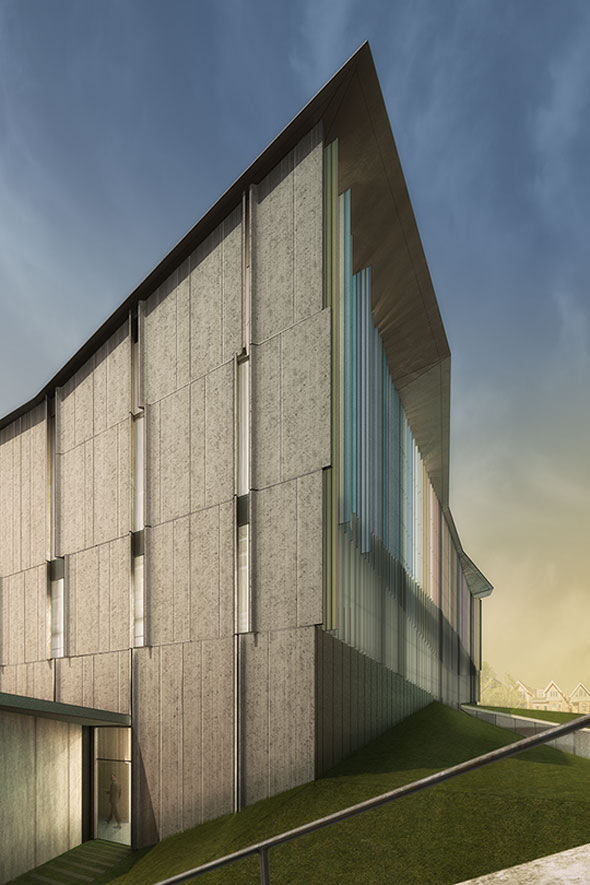 Close-up of the new addition 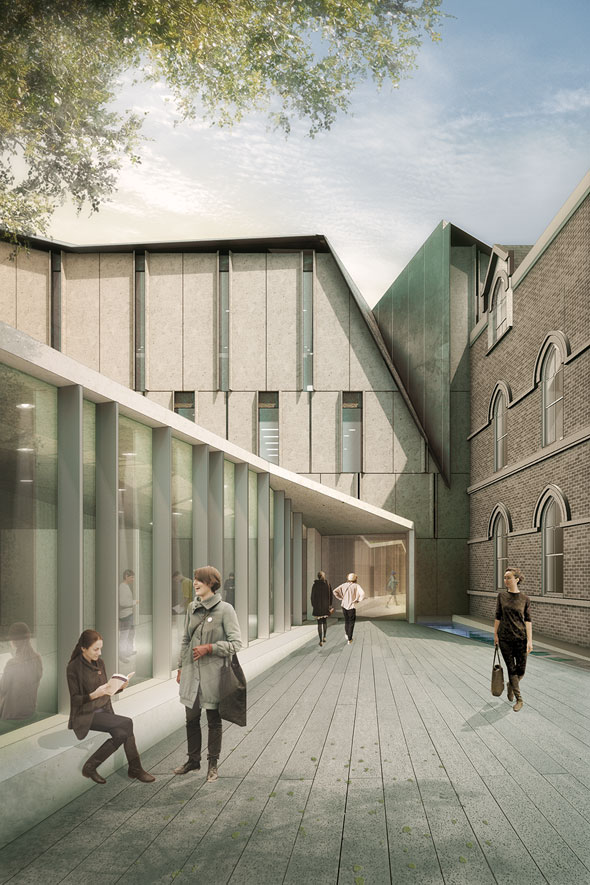 The pedestrian extension of Russell Street 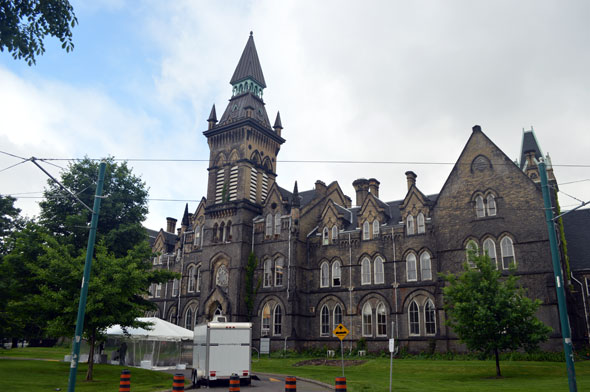 Current view of One Spadina Crescent 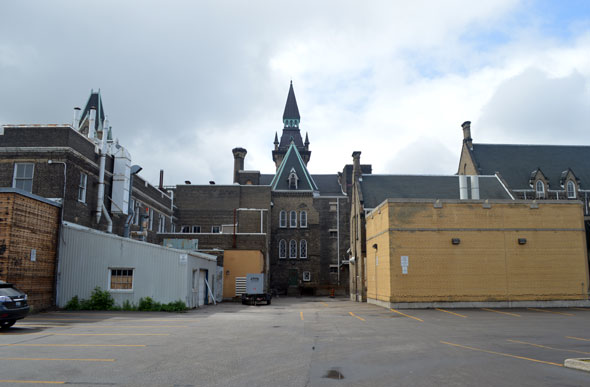 The buildings to be demolished at the rear 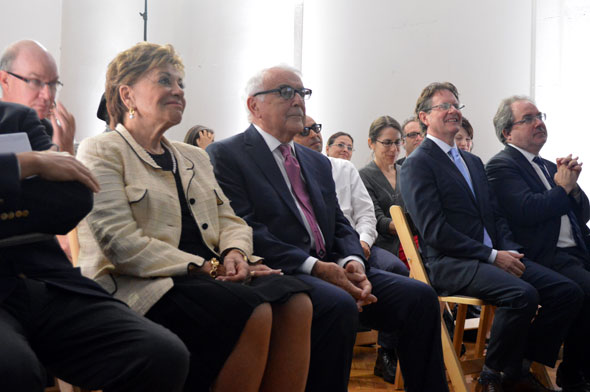 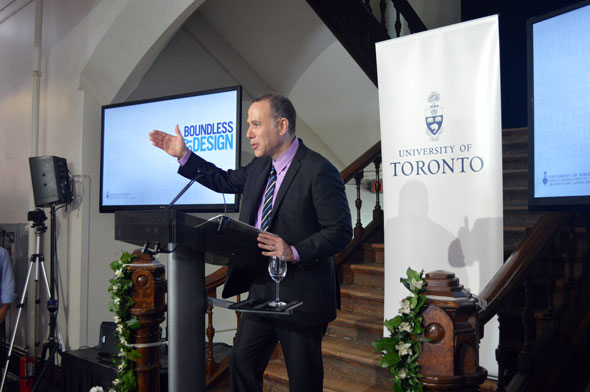