For almost a decade, a prime piece of real estate has been sitting vacant at one of Toronto's major intersections. The former Eglinton station bus bays near the southwest corner on Yonge Street were decommissioned by the TTC in 2004 and officially declared surplus to requirements in 2012.

When a city property is no longer needed, the land is usually transferred to Build Toronto, a real estate and development corporation mandated to prepare land for construction and earn money for the city. Though the patch at Yonge and Eglinton has been closed off and officially earmarked for a mixed-use building, so far nothing's been done to the once-busy transfer point. 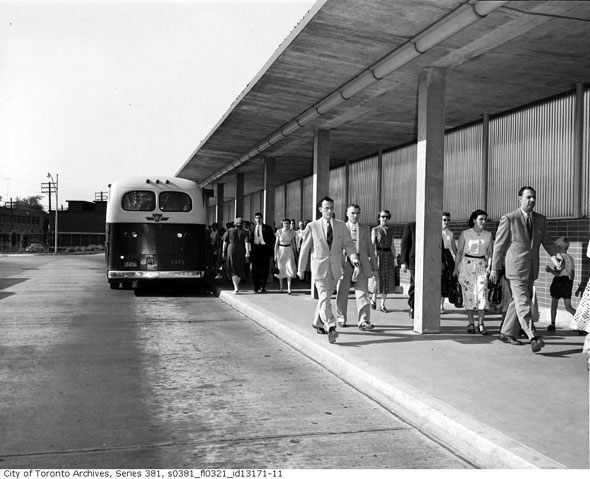 "There's very little status," says Bruce Logan at Build Toronto. "The process that's going on right now is mostly below the grade work and primarily between the TTC and Metrolinx ... we really have no status on that property at this stage, and it has not been transferred to us."

The site will likely remain fenced off and abandoned in until Spring 2016 when the tunnel boring machine (TBM) for the Eglinton LRT is scheduled to reach the west side of Yonge Street. At that time Metrolinx will demolish the concrete bays and dig an extraction shaft to retrieve its underground machinery.

Also in 2016, a separate TBM will arrive from the east and be removed from a separate shaft that's likely to be in the middle of Eglinton Avenue. The intersection will be closed at this point for construction of the station and the connecting tunnels to the subway line.

"It will be post-2020 before something else can be built there," says Jamie Robinson, Metrolinx's director of Toronto LRT projects. Brad Ross of the TTC confirms that date, saying no development will take place before the provincial transit agency has finished its light rail line.

Last October, Build Toronto told the Toronto Star it wanted to have something built in advance of new transit to extract the maximum value from the land, but that now seems increasingly unlikely under the current TTC/Metrolinx plans.

In 2009, city council approved a development of between 20 and 40 storeys for the site and there are rumors the TTC would like some of the space for a new headquarters. Ross says the Commission will speak with a real estate broker soon about consolidating operations away from its current Davisville station headquarters but there are no specifics on where it will go.

Last year coun. Josh Matlow worried that preliminary plans by Build Toronto were for a larger, more dense property, including a skywalk over the intersection of Yonge and Eglinton. Right now, the developers are keeping mum, maintaining there will be "no status" on the site until it's formally handed over to the city in around seven years time.

Local councillor Josh Matlow says he's working with Metrolinx, the TTC, and the city to build a small public space surrounded by "good quality hoarding" on the periphery of the bus bay lands in the meantime.

"We're going to put up big boards that have really nice pictures of the Crosstown, slogans like "Coming Soon," and pictures of the Yonge and Eglinton neighbourhood. Information boards as well, information about the progress of the project ... about construction, either good news or delays. Basically, a place where people come to collect information."

The boards will claim a portion of the disused site for benches, too. Matlow says the Metrolinx is on board to pay for the cost of the temporary facelift and hopes it will improve the TTC's reputation in the local area.

"I said to the TTC: 'With all due respect, you're not being a good neighbour.' We have standards in the city about private residents not being allowed to leave their properties like that because of how it adversely effects their neighbours. The TTC is a public entity and it shouldn't be doing it either."

Matlow said his wife thinks the Yonge-Eglinton site is "the perfect place to set a Hollywood armageddon film" with its cracked concrete and faded paint, and that's something he hopes to change.

What would you like to see happen at Yonge and Eglinton? Should Build Toronto focus on mid-rise instead of high rise? Is 12 years too long to keep the former bus connection vacant? What do? Let us know below.