That time when puppets taught us about danger

For too long fatal dangers in the average Canadian home were left unchecked. Aside from the occasional in-school 16mm horror shows warning of poison and dangerous strangers, there was little effort to educate kids about the severe repercussions of messing around with unknown substances. So after the sweeping Hazardous Products Act of 1971 was authored by Prime Minister Pierre Elliot Trudeau's ruling Liberal Party, it fell to the Ministry of Consumer and Corporate Affairs (CCA) to educate and inform the public of the new Hazardous Product Symbols: four icons that were to appear on the labels of items which contained corrosive, flammable, poisonous, or explosive materials.

Renowned Toronto advertising agency Vickers and Benson, famous at the time for their breakthrough William Shatner fronted "More than the price is right" Loblaws TV spots, had established a close relationship with the Liberal Party of Canada in 1968 after Trudeau's rise to the office of Prime Minister. They were hired to devise the creative behind a new hazard awareness campaign, which would be directed at a young demo and assumed to be co-viewed by their parents and guardians. The simple yet highly effective modus operandi of outer space travellers named Binkley and Doinkel was sketched out - these two green aliens are visiting Earth, and need to learn about potential dangers that should be avoided.

Meanwhile, around the same time, puppeteer Noreen Young was making waves in Toronto at the Provincial broadcasting network of TVOntario (TVO). An Ottawa native who had built puppets from a young age and manipulated them into "incredible plots that would have rivalled Dallas", Young was busy working on the flagship TVO children's series entitled Read-A-Long, which was TVOntario's attempt to mould a Sesame Street styled educational potpourri of live action, animated and puppet vignettes. Impressed by her wonderful creations, scope and ambition, Young was approached to work on the Binkley and Doinkel project, to not only realize the characters in puppet form, but to help train the young players of "The Binkley and Doinkel Safety Show".

CCA's first wave plan was to barnstorm the country, coast to coast, with live puppet shows hosted by "The Mayor", and featuring Binkley and Doinkel and an evil snake named Slither. These Punch & Judy puppet shows were staged in schools, parks, gyms, and playgrounds during the summer months in the early 1970s, under the aegis of the Government's summer student employment program. While the puppets were built and repaired by Young, the operators were University students looking for a summer job, which allowed them to tour Canada and build up some live entertainment credibility.

Although there was a fair amount of freestyle ad lib, the scripts for these live shows were in fact written by a young Vickers and Benson employee by the name of Barbara Amiel, better known nowadays as Lady Conrad Black. This travelling Binkley and Doinkel roadshow proved so popular, that the National Film Board of Canada recorded a live performance, struck a 16mm film print and created video tapes allowing every School in Canada to screen the "The Binkley and Doinkel Safety Show".

To reinforce the messaging presented in the live show, a comic book was produced and handed out at events and in schools. It re-told the story of Binkley and Doinkel, with two major changes: The evil character of Slither was replaced with that of a more Vaudevillian villain, a top-hatted, monocle wearing Basil Rathbone type blagard named R. Pugsley De Pugh, owing to the fact that the CCA had heard objections about stereotyping snakes and did not want to be seen encouraging kids to fear and wish to destroy them (JK Rowling later missed that memo).

Also added to the mix was Binkley and Doinkel's Earth guide, a talking canine named Sniffer who dutifully served the exposition role vacated by the Mayor character in the live puppet show. The comic book included games and puzzles, and more detailed information on the new hazard symbols. Illustrated by legendary Canadian comic book artist Owen McCarron, and his company Comic Book World which also published titles such as Auntie Litter, Wayne & Shuster, Cap'n Bluenose and Colonel Sanders, "The Adventures of Binkly (sic) and Doinkel" was first published in 1974.

In 1978, a second comic book was published, however this edition was illustrated by noted Quebec erotic-artist Diane Desmarais, and bore little resemblance to the first edition. Although the messaging remained consistent, Binkley and Doinkel looked far more alien and less kid friendly. The comic was titled "Haunting Signs", and certainly struck a far more frightening and mature tone than its predecessor. 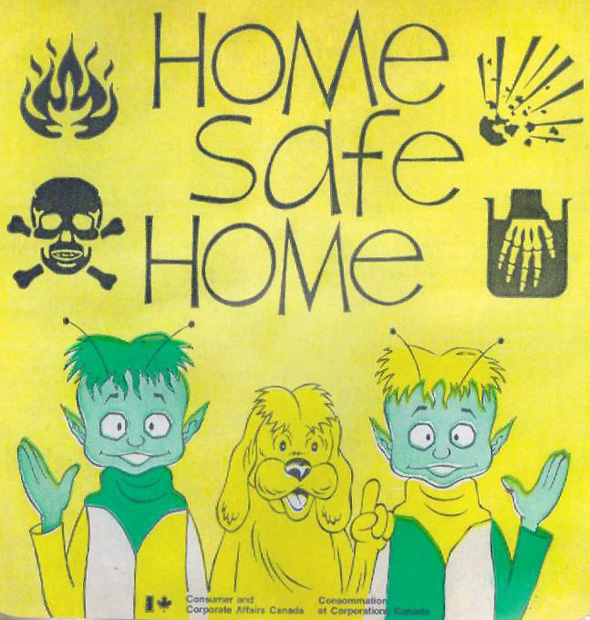 Also around this time, Binkley and Doinkel made the leap to broadcast television. The CCA collaborated with noted Television production company Glen Warren (famous for such Cancon classics as The Starlost, The Littlest Hobo, and The Waterville Gang)to create 4 Public Service Announcements, one for each of the Hazardous Product Symbols, which went on to air nationally on CTV for almost a decade.

For these PSAs Young created new Binkley, Doinkel, Sniffer and R. Pugsley De Pugh puppets, and for Canadians of a certain age, these remain the definitive renderings of the characters. Owing to the sheer number of times the PSAs were broadcast, Binkley and Doinkel became forever associated with the Hazardous Product Symbols, and the spots went on to become the stuff of playground legend, especially after they vanished in the early 1980s. However, the story of Binkley and Doinkel was far from over.

A third and final comic book was produced in 1981, returning to Young's original character design and drawn by Owen McCarron once again. Young was also contracted to create life-size Binkley, Doinkel and Sniffer costumes which went on to tour schools, malls and fairs, where the new comic (and stickers) were handed out to eager children. A new 12-minute live-action video was created by the National Film Board in 1982 to replace the aged "Adventures of Binkley and Doinkel" puppet show.

In 1984, Binkley and Doinkel were retired. It was felt that after more than a decade, the goal of educating young people and the populace at large about the hazard symbols had been achieved. Young continued to work with other Government agencies on puppet-led PSAs, most famously the travelling Geese used by Revenue Canada, Customs and Excise.

Although thirty years have passed since they last appeared on television, Binkley and Doinkel are still revered today, and remain an integral part of the fabric of uniquely Canadian safety characters such as Astar, Blinky and Elmer who helped kids at the time better understand the dangerous world in which they lived. Fans of the unforgettable green duo will be glad to know that they are still on Earth, living in harmony with their creator Noreen Young amongst her vast cadre of Canadian puppets, safe from the dangers of poison, explosive, corrosive and flammable materials.

Special thanks to JC Sulzenko and Noreen Young