A brief history of the first coffee house in Toronto

William Cooper was one of Toronto's early jack of all trades types. Born in Bath, England in 1761, Cooper emigrated to the fledgling town of York in 1793 aged 31. At various times he was a teacher, the owner of a sprawling set of mills, the operator of a wharf, an auctioneer, and, for a lengthy period, despite having no qualifications in the field, a town coroner.

Cooper's other distinction is that he opened the Toronto Coffee House, the first business to use the word Toronto in its name and the local first place of refreshment to identify itself using the name of the hot, black beverage. For that reason the venture was technically the city's first coffee shop, even if wasn't run anything like a modern cafe. 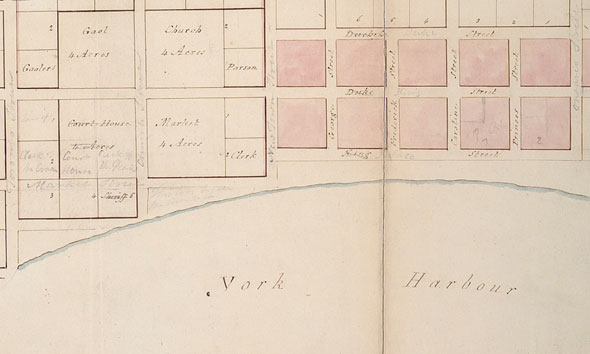 Located mid-block on today's Jarvis Street, just opposite the north building of the St. Lawrence Market, the Toronto Coffee House was actually more like a pub or tavern than a modern espresso bar. When it opened in December 1801, temporarily on the northeast corner of King and Jarvis, Cooper said he planned to keep the place "as nearly on the footing of an English inn as local circumstances" allowed.

The property was an "excellent frame house, two stories with complete cellar, " according to a note in the Upper Canada Gazette.

The reference to coffee was a clever bit of titling designed to cash in on the popularity of coffee houses as shrines to conversation and business. Julia Roberts in her book In Mixed Company: Taverns and Public Life in Upper Canada relates how "men traded in land and sealed their deals with gin and water, and they met more formally to settle financial disputes."

Cooper's menu included wine, brandy, gin, lime juice, and London porter beer, all of which were decent offerings for a tavern on the edge of the British empire. The coffee house also served food: "oysters, red herring, and anchovies" as well as a selection of "cigars, pipes and tobacco."

The business also dabbled in dry goods, groceries and sauces imported from New York, according to a newspaper advertisement for the business. In a small town like York, the tavern was the centre of the local community and had to pull together the duties of multiple businesses. If the place ever did serve tea and coffee the record of it has been lost. 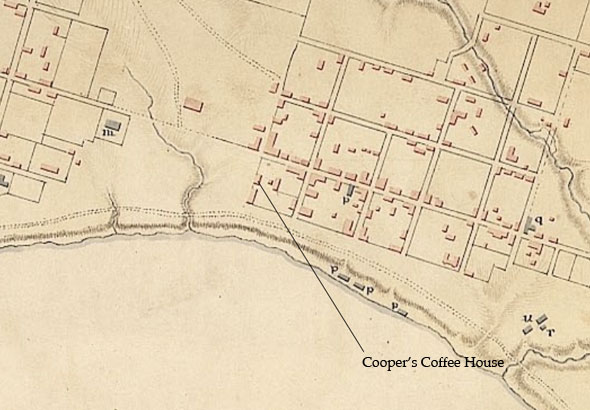 In his role as coroner, William Cooper held at least one inquest at the tavern. The rooms were also used as a venue for the town's first dancing performances and the location opposite the community's market square made it a convenient magnet for local traders and members of the community. Upstairs, "genteel board and lodging" awaited weary travelers.

Inns were a vital part of society in early Upper Canada. In place of a dedicated town hall or other meeting space, the local tavern usually made an acceptable substitute. It wasn't unknown for innkeepers to act as de facto banker and officer of the court, according to author Dorothy Duncan in Hoping for the Best, Preparing for the Worst: Everyday Life in Upper Canada.

In 1806 Cooper sold the Toronto Coffee House. Three years earlier he'd become a miller on the Humber River near Dundas Street, and perhaps the distance and workload was becoming too much. The prolific Englishman had already built a stable and house opposite the tavern on the west side of Jarvis.

Starting with loaned equipment, the enterprise expanded to include a distillery, sawmill, tannery, blacksmiths, and a dam significant enough to block the run of salmon. At one time the operation covered hundreds of acres on both sides of the water.

Around 1815, Cooper expanded his milling and production business further when he was granted a water lot on the town's shoreline at the foot of Church Street. There he built a commercial wharf just as the first steamboats were beginning to land at York. He worked the shoreline until his retirement in 1830, four years after the death of his first wife Ann. 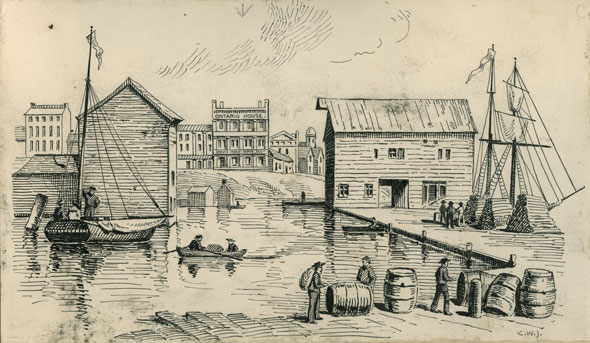 In an advert in 1823, Cooper claimed to have built the first house in York, something there's not a lot of conclusive evidence to corroborate. He did sell an unfinished house on the northwest corner of today's Richmond and Ontario streets to Abner Miles, another one of York's first settlers, for "two steers and a barrel each of salmon and flour."

Miles operated the first tavern in the town, which he opened in 1795 and expanded to include alcohol service in 1796.

Among his other early occupations, Cooper gave private tuition to the children of several notable early residents of the town, local residents, and soldiers from the garrison. When he found the schoolhouse too small he successfully petitioned to have a larger one built at King and Jarvis, adding a credit as the founder of one of the city's first schools to his resume.

As if his other qualifications weren't enough, he also served as backup Anglican preacher and as a licensed auctioneer.

Cooper would remained a coroner of the Home District, a position he held for 34 years, until 1834. He died in 1840 aged 79 having held at least six prominent positions in the early community. 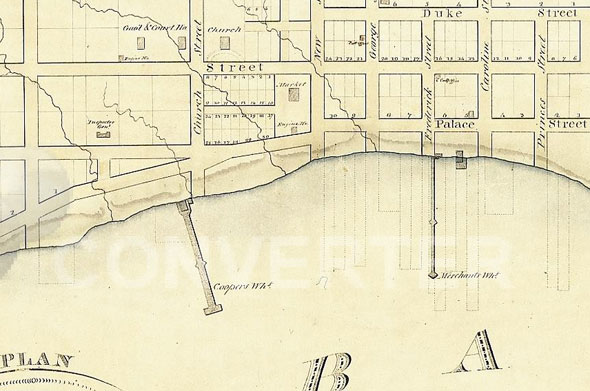 The only known picture of the coffee shop is in the 1803 Elizabeth Frances Hale painting at the top of the page; Cooper's is the white building with the black sign over the door facing towards the artist at the extreme left. The accuracy of the painting is open to discussion, however, since there's no evidence Hale visited York at that time and she was pregnant with her son Jeffery in the early part of the year.

It's possible she created her work based on a water-colour of the area made by Edward Walsh, though that work, if it exists, hasn't been found.

In a nice little bit of serendipity, the property just south of the former site of Cooper's Coffee House is still a pub, meaning alcohol has been served on the block of The Corner Place opposite the St. Lawrence Market for more than 212 years.

Hat tip to Nathan Ng for his excellent site Historical Maps of Toronto that helped pinpoint Cooper's Coffee House and also to Stephen Otto for his invaluable knowledge and insight.