What ever happened to the Jarvis Street roller rink?

In 1931, when the Maple Leafs fluttered out of the Mutual Street Arena, the first home of the team since the Toronto St. Patricks days, the 7,500-seater stadium west of Jarvis Street was in trouble. Without the hockey revenues that were essential to its business, the city-owned property was destined to struggle.

It was under the new ownership of Ted Dickson that after years of uncertainty the Arena Gardens (to use its original name) found its footing and became a venue for concerts, exhibitions, sports, and, most memorably, roller skating. The venue became known as The Terrace in 1962 and grew into a much-loved community hub.

When it was demolished in 1989, the wheels were already in motion to build a replacement. So far it hasn't happened, but that doesn't mean nothing was constructed. Today, the shell of a planned roller rink - located on a Toronto Community Housing property - still needs filling. 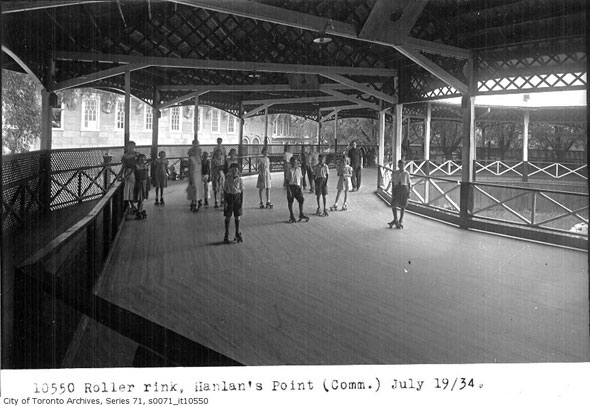 If a Toronto Star report is anything to go by, Toronto's roller-skating palace wasn't much prized for its aesthetics at the end of the 1980s. "Few people have asked the [Toronto Preservation Board] to save the Terrace so far. And city councillors want more housing than a questionable landmark," it reported as council gave final approval to remove the hockey shrine and build new apartments.

More than 1,000 people turned out to take the final skate at the Mutual Street Arena. Lovers who had met at the building in the 1930s at a dance were there to say their goodbyes. Outside, a small crowd of protesters voiced their concerns to local councillor Jack Layton, who promised their petition would make it to city hall. It did, but the city was powerless to stop the project that would leave Toronto without an indoor skating facility.

Various replacements were proposed at a time when the city budget was extremely stretched, including a half-hearted proposal to drain the reflecting pool in Nathan Phillips Square and turn it into an outdoor skating bowl in summer. The city would later get the hang of organizing skating outside city hall. 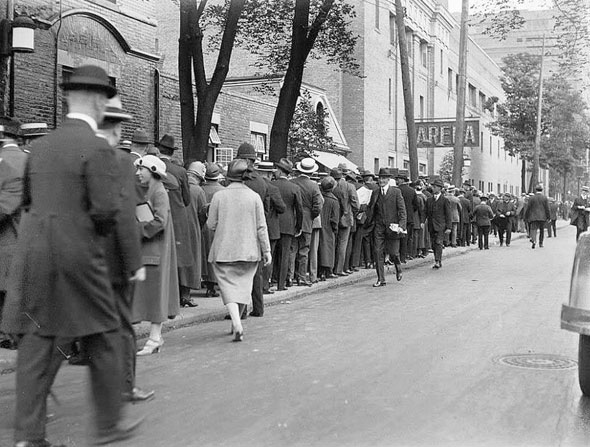 In an interesting parallel with the Scotia Plaza development, a group of teens under the guidance of Jack Layton persuaded the developer Centara to contribute $2 million to building a new roller rink, lest they chain themselves to bulldozers. The company also agreed to donate the Terrace sign, rental skates, and sound system from the arena to the new project.

In exchange, Centara was able to buy the protester's silence and boost the density of their development to 50% above what was zoned. Several years earlier, down on King Street, Layton and a group of other councillors had agreed to end a vocal protest against Scotia Plaza in exchange for a $2 million donation from developer Campeau Corp. to a housing co-op. 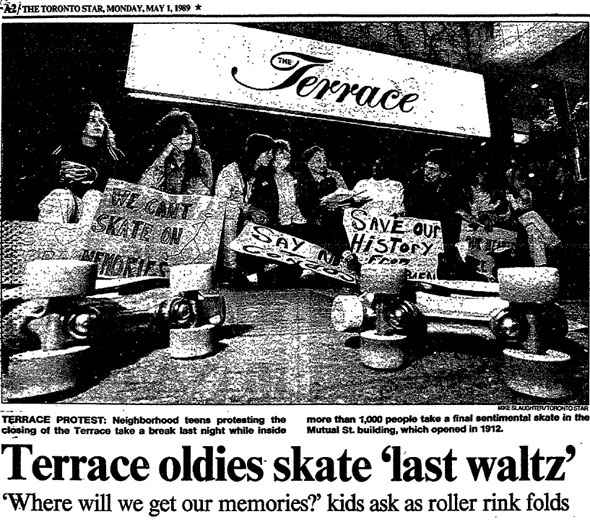 Even with a cut of the development funds the project was by no means a sure thing. The remaining $3 million required to add the rink to the a new Jarvis Street housing complex was hard to extract from city council. Mayor Art Eggleton and budget chief Barbara Hall favored asking Metro for the cash even though the project was also being funded by the province.

In the end, it would take another protest - a "skate-in" on Mutual Street - for council to approve adding the rink to the ground floor of a new subsidized housing project just north of Jarvis and Dundas. Success, or so they thought.

Belt-tightening measures under a newly-elected city council in 1992 nixed most the funds for the building. Instead of a ready-to-use rink, skaters would get an empty shell fitted out with only basic heating. The space would then be leased to the highest bidder. A city-run facility would be too likely to lose money, thought new budget committee chair Tom Jakobek.

By now Jack Layton had moved on after his failed mayoral bid and his vacated seat was taken over by Kyle Rae. 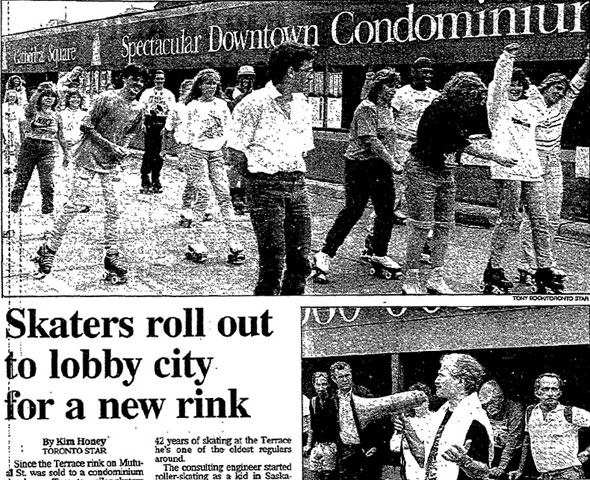 "It was pure political payback," Rae recalls of the decision to effectively kill the rink. "This happens a lot on councils, when someone leaves people who were upset with things unravel them. I feel the same way about Jarvis Street - the bicycle lane ... I put in 10 years of work the community and what do they do? They tear it out."

The property has since been taken over by Toronto Community Housing but the shell remains. Various groups have submitted plans to use the space - though none of them have been a roller rink - but all have balked at the cost of bringing the skeleton up to code.

Rae supported a boxing academy associated with Lennox Lewis but the backers bailed out over costs. A basketball arena was also scrapped for the same reasons. In 2007, the Academy of Performing Arts made a proposal that, in keeping with the theme, also fell by the wayside. 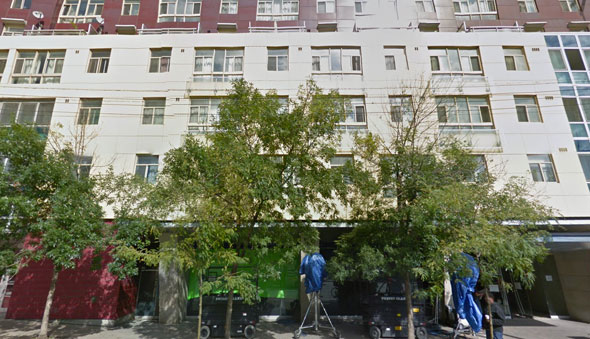 Most recently, a company approached TCH about installing a storage locker facility in the room but were unable to secure the necessary permits. In its decades-long existence, its only use has been as a backdrop for a handful of movies and television shows.

"Leasing or selling the space is complex because the space is part of a large housing co-operative," says Ian McConachie from TCH. "We have posted "For Lease" signs at 261 Jarvis St. and hope to offer a lease for a use that complies with zoning."

Rae calls the 20-year lack of progress "a travesty" for the local community. With no agreement on the horizon, it looks unlikely Toronto will ever get the promised replacement for the Mutual Street Arena.