Bell Media is selling the Masonic Temple at Yonge and Davenport, a historic building most recently known as the home of MTV Canada and several other Bell productions, including some of the best shows on television (you know, eTalk, So You Think You Can Dance Canada, and Canadian Idol).

The company revealed in November that MTV was moving out of the 96-year-old building to a new home at 299 Queen West. At the time, VP of Communications Scott Henderson said the music channel's parent company was "evaluating the property and determining the best use for it." Now it seems the Temple, a former meeting hall and music venue, is surplus to its needs. 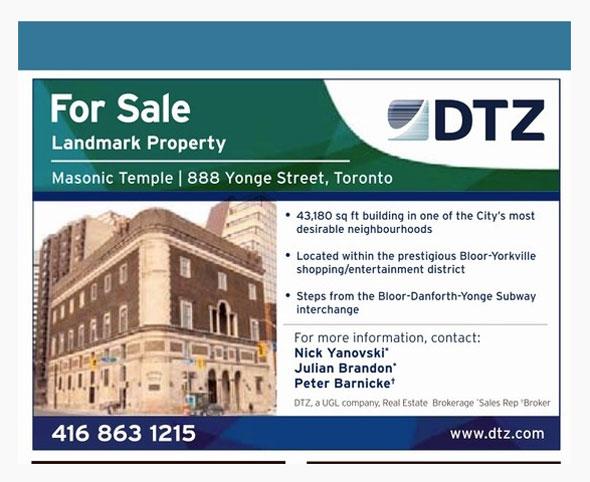 Several of the building's features are protected by heritage agreements so if it were sold to developers any new construction would have to retain large portions of the existing structure. If it's possible to glean anything from the listing, it seems the building is being steered towards residential use.

"It is an open bidding process with no list price (i.e. it's "unlisted")," Henderson said in an email this morning. "There has been great interest in the property. It is a confidential bidding process so we are not at liberty to discuss exactly who."

"Any potential buyer would need to respect the applicable municipal or zoning by-laws. We are advising potential owners to consult with the City at an early stage in formulating proposals for future use of the property. Ultimately, we anticipate that the Masonic Temple will retain the elements that led to its designation in the first place."

What do you think would be the best use for the Masonic Temple. Would you like to see it return to its roots as a music venue? As the Rockpile in the 1960s, the venue hosted Led Zeppelin on their first North American tour. Later, the Pixies, Pogues, and Smashing Pumpkins played there. Would you like to see a heritage restoration in a similar vein to 197 Yonge?