That time when Toronto loved its bank robbers

There was a time when Toronto loved its criminals, or at least when it came to its bank raiding, jail breaking folk heroes â the Boyd Gang. In just 10 short months, the gang carried out some of the most egregious bank hold ups in Canadian history.

Edwin Boyd, whose name the gang adopted, wasn't always the brains nor even the brawn behind the operation, but instead drew popularity (and thus media attention) on account of his dark eyes, wide jaw and gentlemanly charm. Boyd, the son of a police officer, didn't exactly fall into his father's footsteps. After serving in the Second World War, he worked as a streetcar driver. Somewhere along his TTC route Boyd figured he should find a more fruitful way to fend for his family.

On September 9, 1949 Boyd found his new career path. Walking into a Bank of Montreal with a little help from his two earliest accomplices Johnny Walker and Jack Daniels, Boyd pulled off his first bank heist while admittedly drunk. Boyd admitted to having summoned liquid courage in order to pull off his first major robbery having blacked out at points that day. Nonetheless Boyd escaped with $3,000 and was well on his way to making a living beyond the streetcar line.

Boyd continued to holdup banks enlisting help beyond just the bottle. His luck ran out when one of his early partners in crime broke down during a cross examination, turning Boyd in for a string of robberies. This, however, proved only to be the beginning. Once Boyd arrived at the Don Jail he was introduced to Willie and Lenny Jackson (no relation). The three began to plot what would be their first jail break. Lenny, having undergone a serious freight hopping accident, now walked on a prosthetic foot. Thinking quick, the three hollowed out Lenny's prosthetic foot where they were able to smuggle a hacksaw. The three sawed down the bars that held them captive and walked free (or hopped in Lenny's case) where they met Steve Suchan, the fourth and final member of The Boyd Gang. 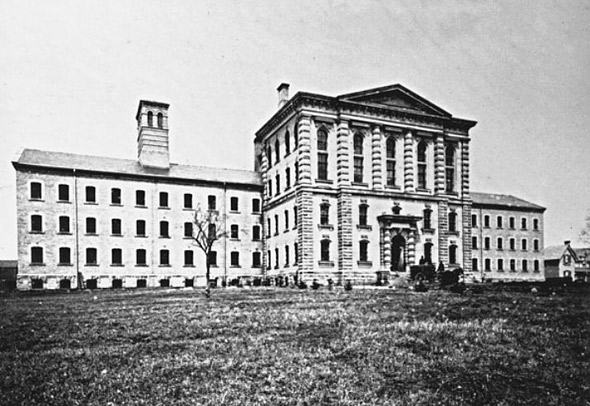 Four months, four robberies and $75,000 later The Boyd Gang was the talk of the town pulling off heist after heist without a hitch. That was until one fateful night when Lenny Jackson and Suchan's Mercury Monarch was pulled over. Detectives Tong and Perry pulled the vehicle over heedless to the fact they were close to capturing two of the city's most wanted. As Detective Tong approached the vehicle Suchan pulled out his .455 pistol and on unloaded on the officer, then proceeded to finish the rest of the clip on the police car injuring detective Perry. Later Tong would die from his injuries. The two bank robbers forged a futile escape to Montreal where police officers awaited their arrival.

Soon enough the entire Boyd Gang was captured and back in the Don Jail. It didn't take the cunning criminals long to procure a copy of their cell key and make their second great escape in September of '52. By now the gang had made fools of bank security, the prison warden and local police, but their second escape was a clearly made a mockery of the competence of city to contain its criminals.

The manhunt for the Boyd Gang was on once again with a $26,000 bounty being placed on their heads. As much as the story was right out of a Hollywood script, their capture was rather anti-climactic. Police were tipped off that the gang was holing up in a barn near Yonge and Sheppard and the four were apprehended without incident. They were sent to the Don Jail never to escape again.

Justice would eventually be served. Lenny Jackson and Suchan who were involved in the murder of Detective Tong were sentenced to death by hanging. Willie Jackson would be handed a 31 year sentence, until he was paroled in 1966. Edwin Boyd was found guilty of bank robbery and a laundry list of other crimes. Boyd received not one, but eight life sentences and was also released on parole in 1966. He would take on a new name and identity. He died at the age of 88 in Victoria, BC.

Boyd and the gang would once again come under the spotlight with the 2011 release of Citizen Gangster, a Canadian made film about the bank robbers starring Scott Speedman. Reviews were, however, mixed â and the production failed to captivate the public's imagination to the same degree that the real story did 60+ years ago.