Sunday Supplement: Pieces of Toronto, the TTC installs bag racks, the battery next door, and the CIBC caduceus

What is it exactly that makes up a city? Is it the people, the buildings, the culture, or a precise blend of the three? Well, the City of Toronto has some pretty precise figures on what exactly constitutes the physical Toronto, and some of the most interesting stats are listed below. Spoiler: there's a lot of roads in this city.

Also this week in the Sunday Supplement, a look at the TTC's new and long overdue Airport Rocket luggage racks, an introduction to neighbourhood batteries, and an attempt to rediscover Toronto's misunderstood caduceuses.

PIECES OF THE CITY 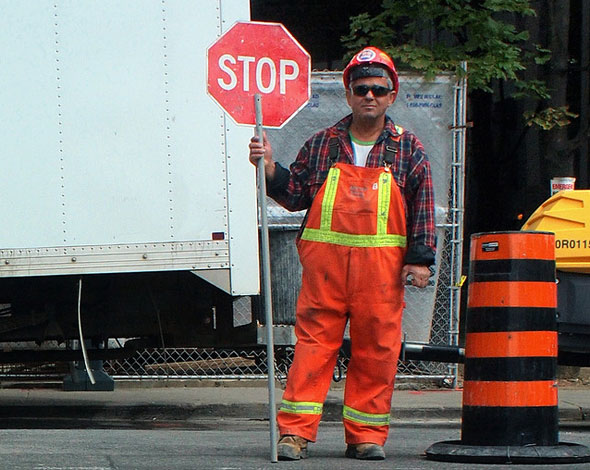 The complete 2013-2022 ten-year capital works program for the city's $9.9 billion worth of transportation assets has been released (hooray!), and apart from providing a forensic breakdown of repair and maintenance spending there is also some interesting data on exactly what the city owns. Combined with other reports, including one from parks, forestry and recreation, we know that Toronto consists of:

If Toronto's roads were laid end-to-end they could stretch from Moncton to Vancouver (well, they'd taper off somewhere in the Rockies, but close enough). The sidewalks on the other hand could pave a merry walking route from Iqaluit to somewhere in Uzbekistan. Amazingly, the city's trees shade 20 per cent of the ground within the municipal boundaries. 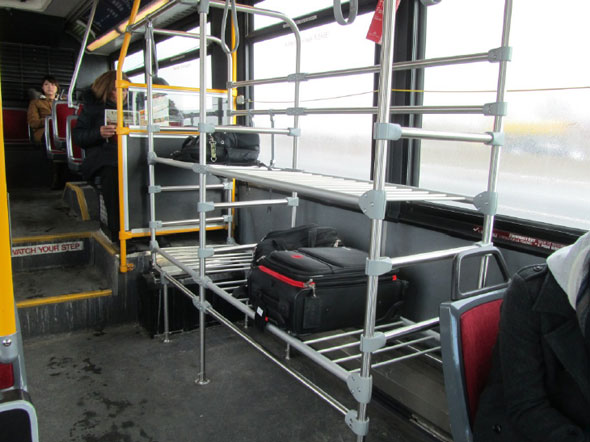 Yes, that's right, after years of making riders pile on an overcrowded bus, desperately clutching 20-kilo weights on a swerving obstacle course from Kipling station to Pearson, the TTC has finally seen sense and installed basic luggage racks on its 192 Airport Rocket.

Though they don't look like they'll keep anything in place on, say, a corner, the six by two foot racks are conveniently located opposite the exit doors on all 10 of the TTC's dedicated airport shuttles. And look, more straps to hang on to!

The additions come during a bumper retrofit week for the transit operator. On Thursday the TTC's Brad Ross confirmed an updated version of the Rocket subway train with extra hand rails is now in service. Nice one.

Power outages can be frustrating and as Toronto's population grows and demands on the aging electrical grid become greater, Toronto Hydro is looking at new ways of stabilizing the supply.

As you know, the battery in a laptop computer automatically kicks in during a power failure. The same principal is what's being tried on a large scale at the Roding Arena and Community Centre in North York near Keele and Wilson.

The Community Energy Storage unit consists of 48 high-performance cells capable of providing power to a house for nine days at full charge. Spread over a street, CES units could provide back-up electricity for several hours. The unit is the first of its kind in Toronto, as the video above explains.

"WHAT'S THAT THING?" - AN URBAN EXPOSITION 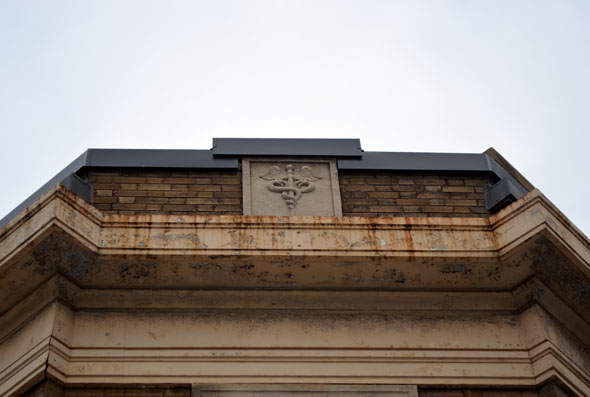 Though it might look like the symbol traditionally associated with medical practice, the caduceus is actually an ancient Egyptian mark of commerce. Its misuse by seems to stem from its similarity to the Rod of Asclepius, a single-snake symbol associated with a Greek deity. The US Medical Corps logo is a notable misuse of the caduceus.

The caduceus is a common sight in Toronto because of its use in the seal of the Canadian Bank of Commerce, now CIBC. Plenty of bank branches built before 1908 still carry the logo etched in stone over the main entrance; most major intersections on the Danforth between Broadview and Coxwell have a CIBC caduceus. Look up!