A long-time contender for the ugliest building in Toronto could be about to get some interesting neighbours. A huge proposal to develop much of the Toronto Star lands at 1 Yonge Street into a cluster of giant, optically-confusing towers is currently percolating among architects and developers.

Though the plans are in their very earliest stages and haven't yet been filed with the city, these drawings that first surfaced at Urban Toronto are an indication that developer Pinnacle International wants something eye-catching for the area currently occupied by a low-key print facility and an open air parking lot. 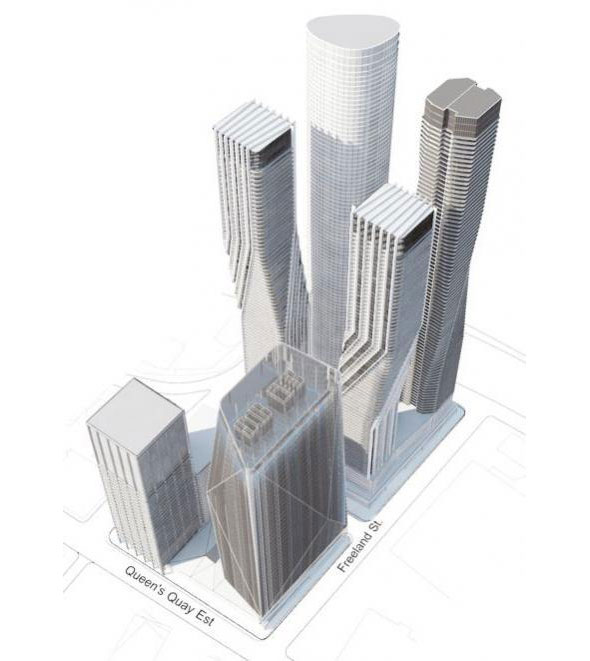 Central to the site are two dog-legged towers sketched midway up the block between Yonge and Freeland streets. Though they are smaller than the more conventional structures planned for the Lake Shore Boulevard elevation, these two are the most memorable and the ones likely to see revision at the hands of the city's Design Review Panel.

At street level, judging by the renderings, the complex will have retail space on Queens Quay East (note the confident appearance of a streetcar) that would tie in nicely with the redevelopment work currently underway in the area. Over the next year, the city is working to rejig much of the street to be more pedestrian and transit friendly.

There's not likely to be any relief for enemies of the brutalist Toronto Star building, though. Its leaden presence on the corner of Yonge and Queens Quay is likely to linger on for some time yet, albeit in the shadow of something a little more modern.

What do you think of these plans - would you prefer the developers kept it sensible on this site? Whatever happens, the waterfront location means these buildings won't be lost in the forest of the city's flourishing condo scene. How could this plan be improved?