Are these TTC uniforms better than the current kit?

The TTC's maroon uniforms might not be much longer for this world if Andy Byford has anything to do with it. Late last year the CEO revealed the Commission was planning to give its roughly 5,000 uniformed workers a new look, something "symbolic of a new approach."

Toronto's transit provider has been constantly refreshing its uniform since its inception in the 1920s. In the early days, the mostly-male workforce wore smart button-up jackets in winter, and shirts and ties in summer. Instead of name tags, the motormen and supervisors wore special hats bearing their job title while on duty. 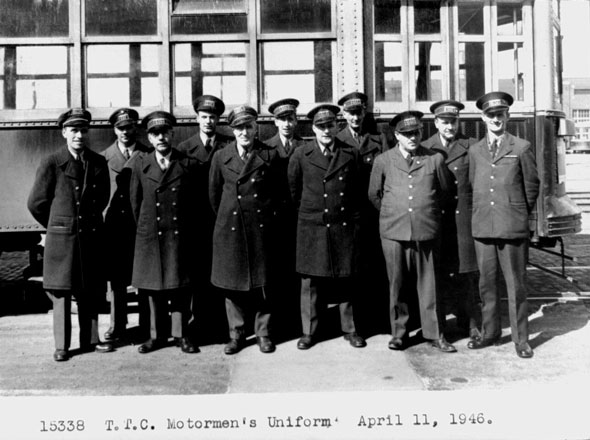 Women's uniforms were similar to men's, minus the pants (even in winter.) The female guides who sold tickets and dispensed advice to travelers had their own hats, first a basic peaked headpiece, later a sort of wedge cap, and a shoulder bag for transfers and coins. A shirt and tie was mandatory for both sexes, regardless of season. 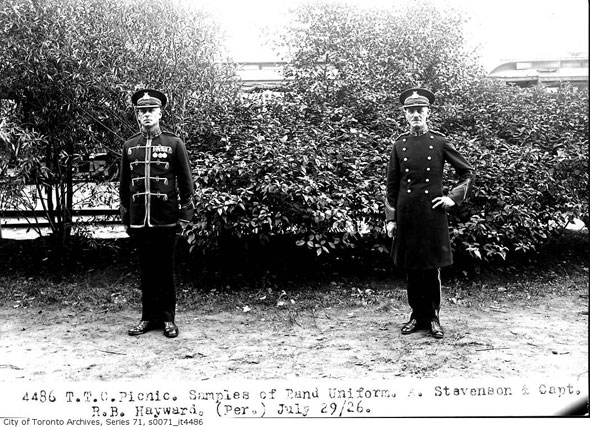 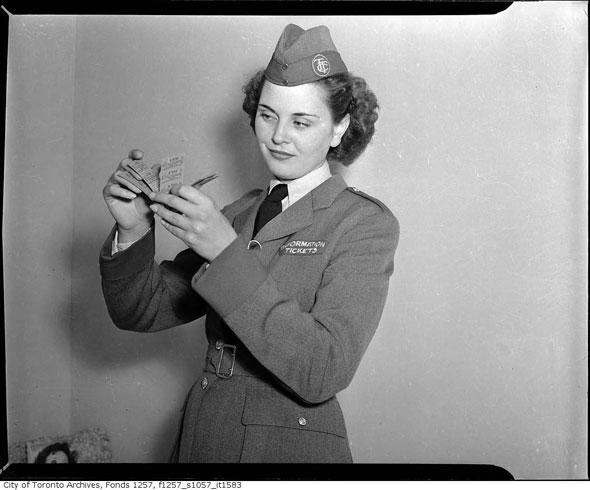 , the TTC also ran Toronto's ferry fleet until the 1960s and as such had suitably nautical outfits for its lake-going staff. Pilots and shore workers wore a basic sweater with the initials "T.T.C." stitched into the front with a soft cap, elegantly modeled by a decidedly shifty looking ferry worker in one of the photographs below. 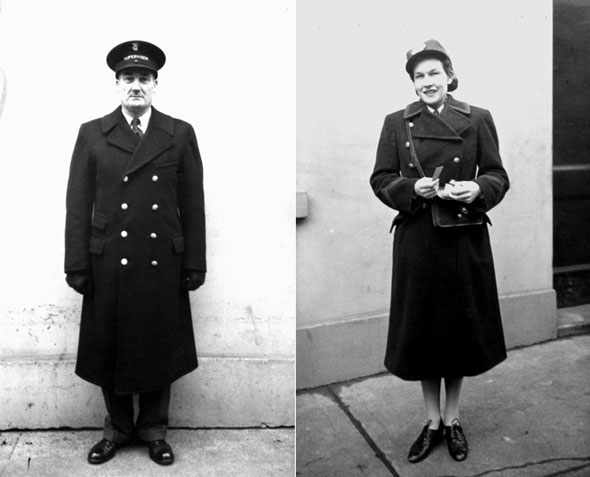 The Toronto Concert Band, the now-defunct internal orchestra that gave regular public performances between 1925 and 1939, also had their own clothes. The band's conductor, Richard Hayward (shown in the band photo above on the left), was an ex-military bandsman who, 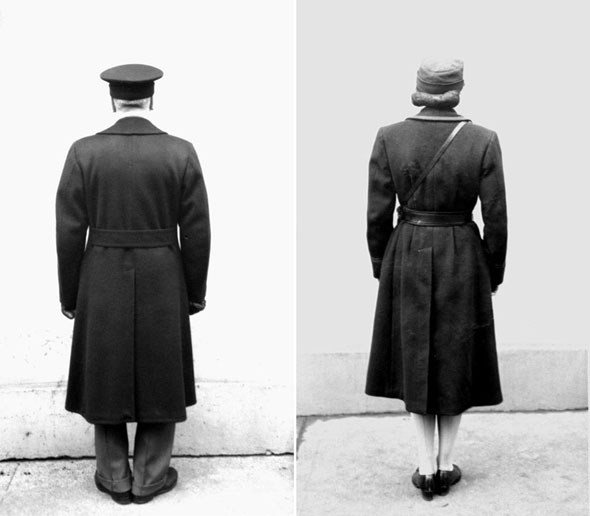 according to Mike Filey, had served with the Royal Irish Rifles and the Queen's Own Rifles in Canada. He would re-join the military at the outbreak of the second world war and the dissolution of the music group.Back on the customer service side of things, the post-war grey and red work clothes worn by the women in these pictures were officially modeled by Irene Ayers, Miss Toronto 1946, after she was awarded the title at the police games that year. According to the write-up in the Toronto Star, Ayers worked as a guide at Queen and Yonge and used her $300 winnings to take a modeling course in New York while keeping her day job at the TTC.A supervisor (left) and guide (right) in winter apparel from the 1940s.The arrival of the 70s saw the TTC's smart duffel coats replaced by practical nylon raincoats and, naturally, slightly flared pants. As the confused looking model below illustrates, this look is (style-wise) the approximate halfway point between the first official outfits and today's 1990s-era uniform.

As in the 1940s, the 1970s uniform came with a selection of seasonal jackets. The basic suit could be covered by a lighweight windbreaker or a longer, waterproof zip-up coat. The peaked hat worn by some of today's operators, a slight variation of the older style, had also arrived. 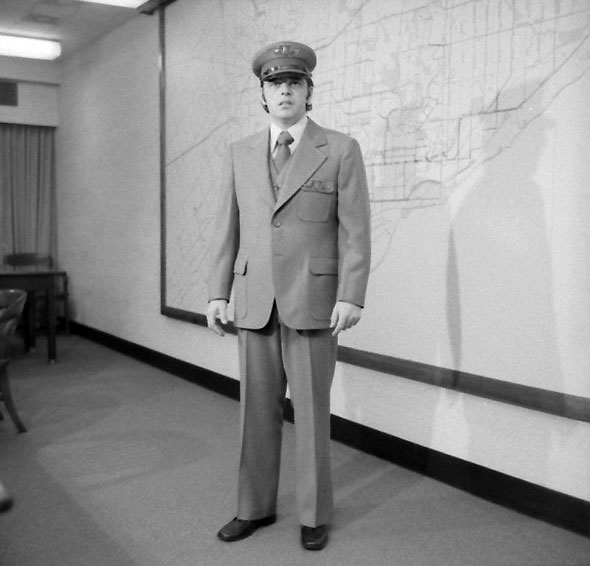 What do you think of the TTC uniforms of old? Should Byford's new look adopt some of the classic stylings from the 1940s or should it go for something closer to the style of today? More importantly perhaps, should the TTC ditch the maroon and go for something a little cooler? If so, what? 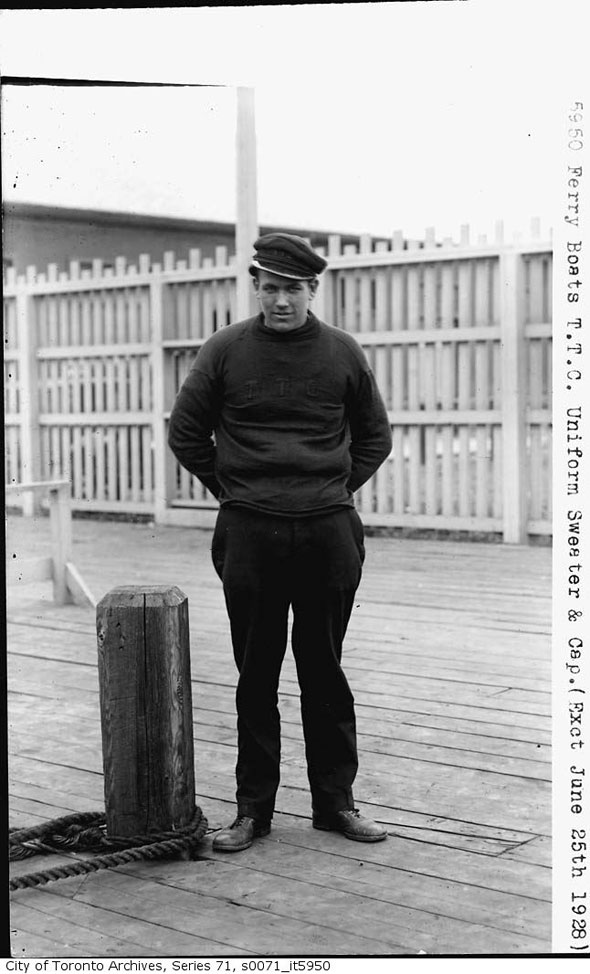 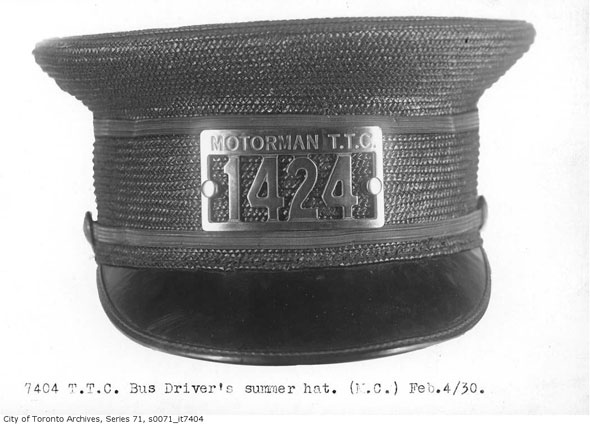 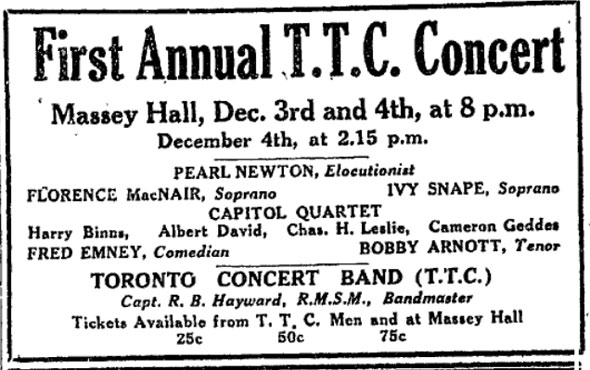