The crash that built the Queen East subway

In the late-fall gloaming of Nov. 17, 1904, streetcar No. 642 was heading east on Queen Street towards the village of Riverside and the Beaches beyond. The Toronto Railway Company car was one of the city's first electric trolleys, a wooden cabin on metal wheels with an absurd galleon-style steering wheel, driven by Willis Armstrong.

As the motorman approached the at-grade GTR rail crossing between De Grassi and McGee Streets he noticed the white barriers were down in advance of a Montreal-bound freight train that was presently thundering past the Distillery. Steel bars called "Scotch blocks" set into the tracks 20 feet from the crossing were raised to slow stray streetcars.

In the back, women clutched children while men in smart suits browsed the evening edition of the Toronto Daily Star. 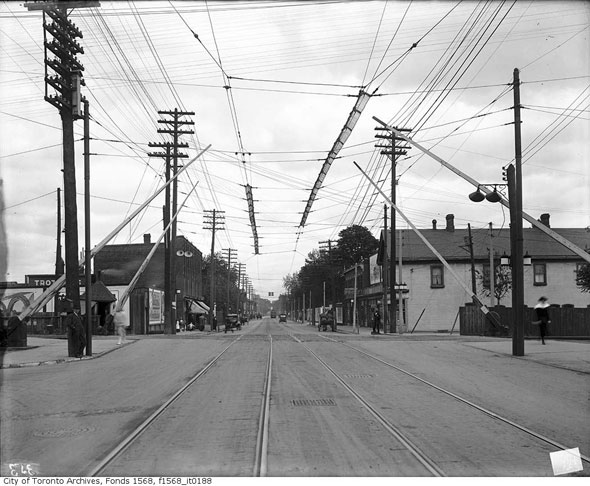 Before the eastbound tracks out of Toronto were raised and fitted out with bridges, the express line for Kingston and Montreal sliced through the Port Lands, Riverside, and northwest out of town at street level. Trains ran roughly every thirteen minutes in 1904 - 110 a day - so a team of signalmen we employed on the line to ensure the way was kept clear at each crossing point.

Using a system of bells, the team would signal the next crossing when a train was approaching. When streetcar No. 642 approached, the gates had been down for roughly two minutes and a small crowd of pedestrians had gathered on either side of the street.

Established protocol among drivers required motorman Armstrong to gently apply the brakes around Saulter Street and coast to a halt. The braking system on the TRC cars was controlled by a lever in the cab connected to the underside of the vehicle by a metal chain.

This system had faced criticism before. A newspaper article cited an incident on Bathurst Street that allowed a streetcar to run a stop sign and roll around a corner out of control; at Carlton and College, a TRC vehicle was heavily damaged when it rear-ended another car. 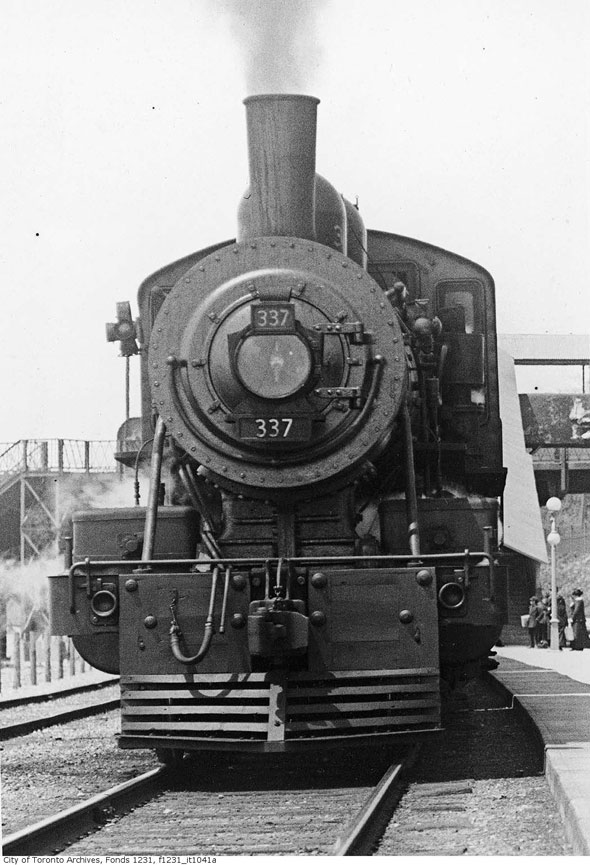 Instead of the Queen East streetcar slowing, it maintained its speed toward the crossing gates. With a collision imminent, the driver leapt clear of the cab, abandoning the streetcar to its fate, and landed with a thud on the street.

No. 642 slammed into the Scotch blocks, tearing them from the ground, and crashed through the lowered barriers. Within moments, the GTR freighter tore the streetcar in half, scattering bodies, wood, and steel in every direction.

The sickening screech from the train's emergency brakes filled the air as the locomotive shuddered to a halt 110 metres down the line, pieces of debris wedged in its cowcatcher. The cab lay upended, relatively unscathed, at the side of track close to Queen Street. 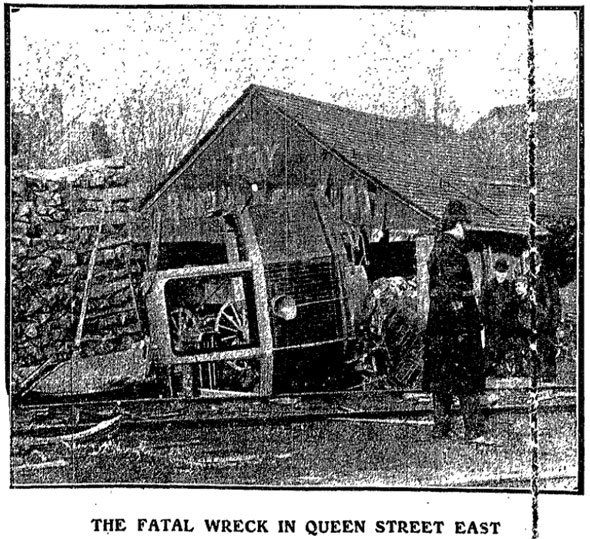 In the immediate aftermath motorman Armstrong was not found among the survivors and he was presumed dead. Two passengers were killed instantly and another seriously injured died in hospital a short time later. A child, Baby Robertson, lost a leg and many others suffered similar wounds.

Armstrong turned up a short time later, still bleeding from his fall, and was taken to hospital suffering from shock. Police arrived a short time later to make an arrest but were advised to keep the man under medical watch as he was "too unstrung" to leave. The crew of the Montreal-bound freighter were also subpoenaed as witnesses.

Back at the accident site, a crowd of nearly 1,000 people swamped the area, some stealing pieces of streetcar as souvenirs. The dead, William J. McKay, Russell J. Stevens, and Minnie Mahaffy, were removed. 12 of the more seriously wounded, including the Baby Robertson, were taken to the General Hospital at Gerrard and Parliament. Doctors from nearby homes patched and dressed the wounds of those relatively unscathed.

An inspection of the debris eventually proved Armstrong's claims that the brakes had failed accurate. A broken link in the brake chain prevented the caliper pads moving as intended and the driver could have had no control over the ensuing events. 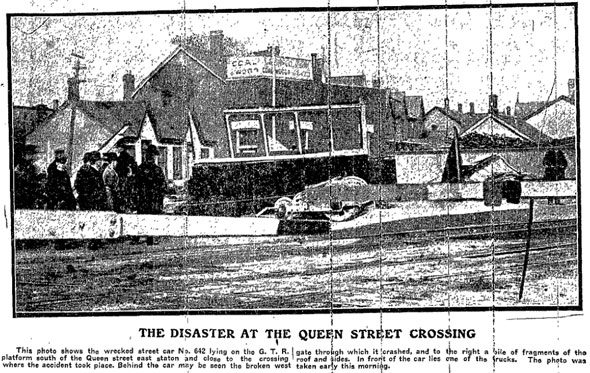 TRC was criticized in the days afterward for using "poor cheap brakes". The Star wrote the company "failed to have any regard to the value of human life in equipping [streetcars] with old-fashioned hand brake which has been in use for many years. Surely it is a scandalous thing that in the face of such convincing proof of the utter uselessness of the hand brake that Toronto Railway should be allowed to use it."

In 1921, 17 years later, the TRC was merged into a new transit provider, the TTC. A coroner's report ordered that the crossing be immediately removed and a dedicated bridge built to prevent further accidents.

In true Toronto transit style, it would take 23 years for the bridge to open.

Photos: City of Toronto Archives and the Toronto Star.