Historic Clarence Square gets a facelift

At the intersection of Spadina Avenue and Wellington Street, in the busy downtown core, sits a little historic park called Clarence Square. In the summer, people sit or lay back on the park benches to read, nap or people-watch. Occasionally squirrels race down the enormous trees, chattering at each other, while small dogs, let loose by their condo owners, scrabble after them.

In moments like these, the park seems like a vision of what 19th century city planners sought to achieve - a green resting space amidst the bustling city. As one of the oldest parks in downtown Toronto, the square has been serving Torontonians a quiet slice of nature since before Toronto got its name, when it was known as the Town of York.

In 1833 Lieutenant Governor Sir John Colborne agreed to auction off part of the military reserve attached to Fort York to accommodate the growing Town of York. Eighteen lots went up for auction, and city planners and stakeholders snapped them up, building the quintessential city structures of the day (a church, burial grounds, a market, parks) based on the city planning models of the British Empire. 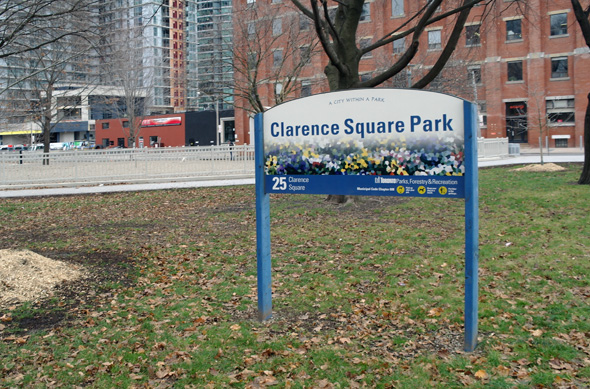 Wellington Street (then called Wellington Place) was envisioned to be an impressive tree-lined boulevard that connected two parks in the east and the west. The park in the west became Victoria Memorial Square, which still exists today, and the park in the east became Clarence Square.

Like Toronto, the square has been transforming to suit its citizens' needs. For seven months beginning in May of this year the square was under construction. In mid-November, the newly revitalized square revealed its new features: a fenced-in dog run to accommodate the area's large dog population; a dedicated bike lane that zips through the park from Wellington Street to the crosswalk at Wellington and Spadina; a new bench-lined walkway and 22 new trees scheduled for planting in the new year. 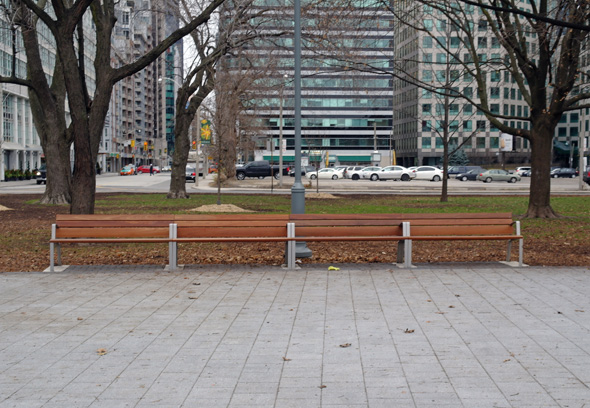 The only part of the park that didn't get much TLC was its centre, marked by a large circular concrete slab. From as early as 1870, a grand classical fountain crowned the centre of the park, with paths radiating outwards in the shape of a modified Union Jack.

The fountain was later removed, but, thankfully, plans are underway to restore the park's centre to its former glory. According to Councillor Adam Vaughan's office, by next year that lonely concrete slab could be replaced by a piece of public art or a classical fountain relocated from the Art Gallery of Ontario.

The charms of Clarence Square are not limited to the park. On the square's north side, quaint 19th century row houses host an eclectic mix of shops. The newly opened French cafe, Le Neuf, neighbours the hostel, Clarence Castle, on one side and fashion designer, Pat McDonagh, on the other. On a cold, crisp Saturday, if you look out to Clarence Square from one of the row house patios, you can see the realized century-old vision of York city planners: a congregation of people and animals, strolling decadently, enjoying a small preserve of nature in the busy city. 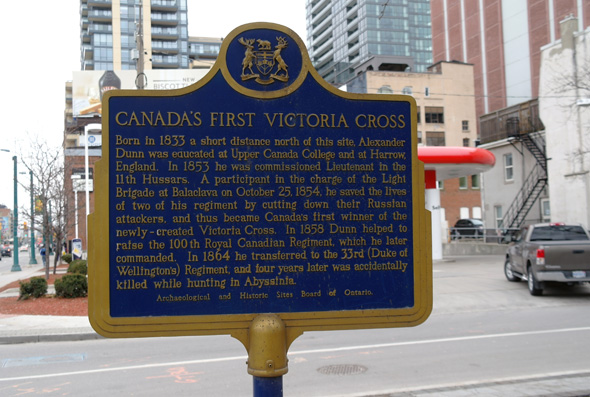