Nathan Phillips Square is a hive of activity right now. Celebrations for the 100th Grey Cup Festival and construction work on numerous new, less grey features are now underway. Below is a reminder of what the project is bringing to the space outside City Hall. There's also a look at an often overlooked feature of Toronto's streetcars and video of the end of Etobicoke's lost tourist destination.

The lead image by Martin Reis shows one of the final riders of the Jarvis bike as a work truck approaches, cleaning off the controversial paint. Removal of the bike lanes started Monday and sparked a minor but passionate protest from several cyclists. A fifth lane is due to be up and running at the expense of the markings shortly. 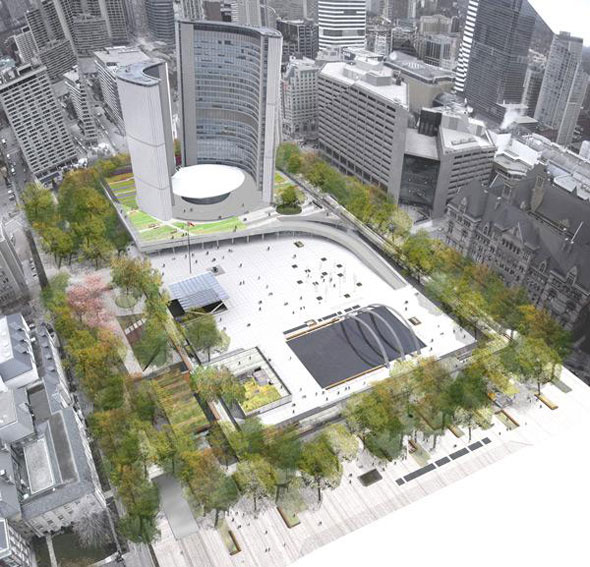 Construction might be running a little over budget, but Toronto's civic square and monument to the glory of concrete is in the late stages of a major facelift. When it's finished, the city will have a much-improved space to gather, play, and protest (if the need arises.)

Here are some of the new features currently now scheduled to cost $2.6 million: 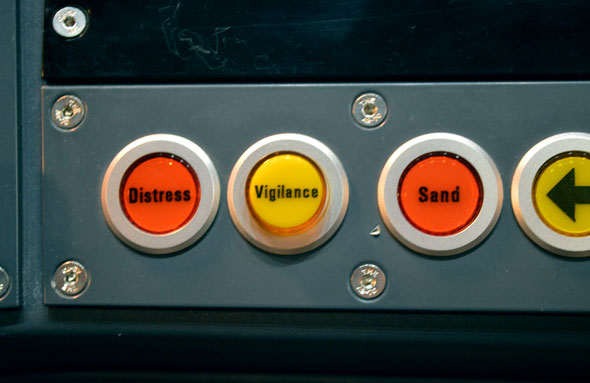 Toronto's new streetcars might be chock full of fancy features like air conditioning, Presto readers, and extra doors, but one thing is staying the same from the old model, and that's sand. Lots and lots of sand.

When a streetcar - or any train for that matter - has to brake suddenly, the metal wheels tend to skid across the surface of the rails. Depositing a blast of sand provides extra grip and reduces stopping distance.

In the current CLRV and ALRV streetcars the sand boxes are located under the first seats on each side of the vehicle. The fine spray is automatically deployed when the driver steps on the anchors or when there's particularly low traction. The driver can also apply sand manually.

Look out for patches of fine grit trapped by the rails next time you're crossing the street and rest assured it will be there for some time yet.

CARDS WITH A HEART

It's easy to forget that while we're fussing over shiny new additions to the TTC's fleet many people in our communities regularly go hungry and rely on local food banks for sustenance. At Christmas, these problems can seem even more pronounced.

"From Me T.O. You," a local group of graphic designers, has produced a series of charity Christmas cards to benefit the Daily Bread Food Bank. The packs of 10 cards cost $15 and are available online.

Earlier this week demolition crews tore down the last remnant of Etobicoke's once booming lakeshore hotel strip. The Beach Motel was once one of thirty or more resorts on Lake Ontario popular during the 1950s and 60s. When the Gardiner Expressway arrived, however, the appeal of the lake front in the area waned. The motels that clung on were renowned for prostitution and drug use in recent years.

Above is video of a hungry grabber pulling down the walls of Beach Motel to make way for a new condo development.

Photos: "Stand in the place where you bike" by Martinho from the blogTO Flickr pool, PLANT Architect and Shore Tilbe Perkins + Will, and Chris Bateman/blogTO.