It's Ossington all over again. The stretch of Queen Street between Dufferin and Roncesvalles will not see any new bars or restaurants for at least a year if a temporary bylaw is allowed to run its course. Reported by NOW yesterday morning, the ban prohibits new hospitality businesses and forbids extensions or modifications to existing outlets in the area - including patios - in the hope of preventing the flourishing scene pushing out stores vital to the health of the area.

According to a staff report, complaints from local residents about increased noise, vandalism, garbage, and traffic congestion prompted councillor Gord Perks to push for the restrictions.

Joanna Kimont, a City of Toronto planner, says the action will allow city staff to properly complete a restaurant study on the area designed to report on how the bar boom is affecting the neighborhood. Though it's some way from completion, the study could restrict to the size and distribution of businesses along this stretch of Queen Street.

"Any applications that have already been submitted for a building permit or otherwise, those are being reviewed by our buildings division in conjunction with our legal staff to determine the status of the applications and how, if at all, they are impacted by this bylaw." 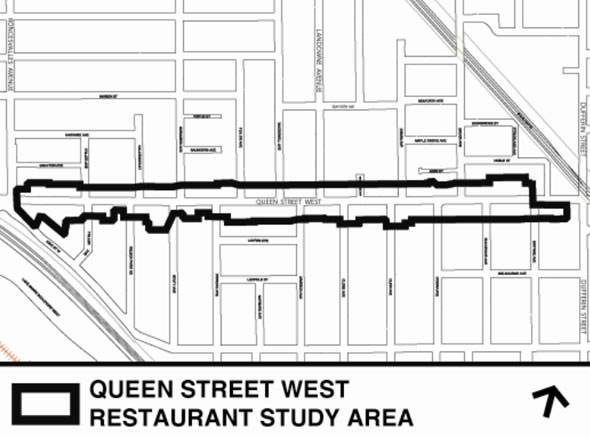 Popular taco and bourbon joint Grand Electric at Queen and Elm Grove submitted a liquor license application for a new second floor extension just a few months ago. It's still in the works, and the new embargo could delay the project at least while the city figures out how to handle active applications for alterations.

"It definitely contradicts the interests of small business people," he says. "I think when a new bar or restaurant opens on the strip it benefits all of us, speaking as someone who lives and works in the area."

"A lot of the small businesses here have created an atmosphere of success [but] are still working very hard. It's not like we're all laughing with business to spare."

Closer to Roncesvalles, John Silva, co-owner of Poor John's Cafe, is of a similar mind.

"For the people on the cusp of starting their businesses, it's a terrible thing to do to them for sure. I understand where this is coming from but this isn't the way to address it. It's like shutting the barn door after the horses have already gotten out."

Is it a good idea to slow the Parkdale boom or is this a blow to the local area? Should the city cap the number of restaurants and bars in Parkdale?

Images: "Parkdale" by Craz11 from the blogTO Flickr pool and City of Toronto.