City of Toronto closes in on new look for Front Street

As far as Toronto welcomes go, the exit to Front Street from Union Station could be a lot worse. It certainly beats the anonymous landscape around Pearson and the claustrophobic driving experience one is treated to coming down the Don Valley Parkway but, as far as the City is concerned, we could still do much better.

Capitalizing on the major TTC and Metrolinx renovations taking place under Union Station, the city is planning to completely re-work the stretch of Front Street between York and Bay streets, adding improved taxi and pedestrian facilities as well as better connections to the surrounding streets.

The project itself isn't new (it's actually been in the works for several years) but specific details are only now starting to be fixed in place. Though there's plenty still to be finalized, it's worth taking a look at what we're likely to get in the coming months. 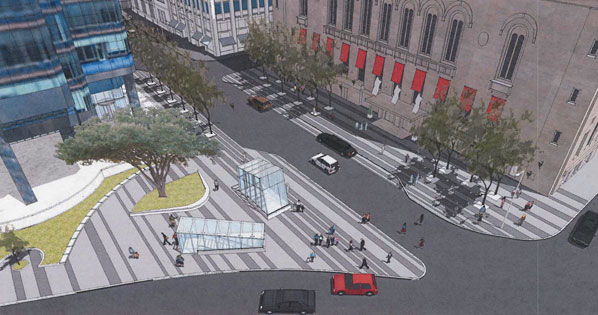 As one exits Union Station's ticket hall, a wider sidewalk area, possibly with cafe seating, will be the most noticeable change. On the road itself, the city envisions a raised "table top" area constructed using interlocking stones for easier vehicle connections. Presently, the crush of taxis in rush hour is brutal.

Under the street, a new PATH extension will connect Union with a portal on the northwest corner of York and Front. A second tunnel, to be constructed later, will stretch under York to Wellington Street.

For cyclists, the city is against installing a separated lane through the table-top area, fearing bikers could be encouraged to ride too fast in the pedestrian-friendly space. A dedicated lane would also take up valuable sidewalk space.

According to the minutes of the city's Design Review Panel, a group of experts that critique new developments in the city, the plaza outside Union needs to be "a vibrant, memorable public space of the highest quality." In their September meeting, the most recently available, the panel called for more trees and public art installations on the block.

They also asked for rolling curbs like those on the Sherbourne bike lane to be used on the new median to improve access for wheelchair and vision impaired users. The relatively small size of the taxi area was also revealed as a concern.

What do you think of these changes â do we have the potential for a winning public space on our hands? What, if anything, would you like to see added to the street? More details on the project are available in this public document [PDF]. 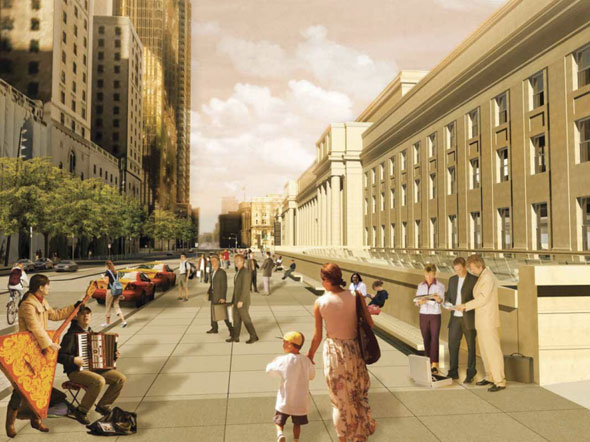