T. S. Eliot said it best. "Between the idea and the reality, between the motion and the act, falls the shadow." That's probably the best way to view yesterday's presentation of David Mirvish and Frank Gehry's King West towers; an idea yet to go through the mill of zoning, city council, and the court of public opinion.

What the pair really gave us was a sketched vision for Toronto's theatre district and the city skyline. What we end up with will, by Gehry's admission, be slightly tweaked and refined over the remainder of the design period.

Imagining for a moment that the buildings are approved entirely as planned, which is a little unlikely, we can take stock of what we will gain and lose as part of the development. 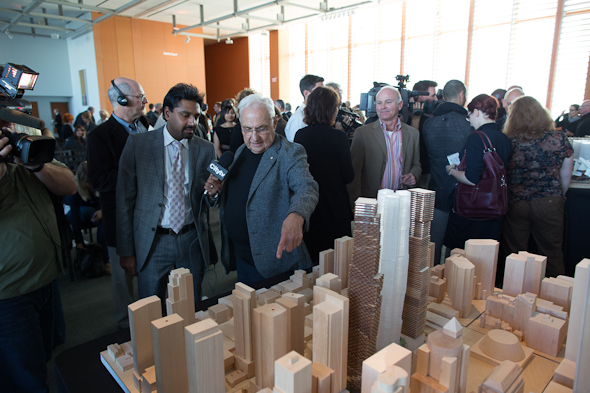 What we could gain

No doubt about it, Frank Gehry is the real deal when it comes to designing world class, iconic structures. You don't have to look any further than the Guggenheim Museum Bilbao or the recently completed 8 Spruce Street in New York City to understand Gehry's tendency to build city-defining structures.

John Karastamatis from Mirvish Productions says David considers Gehry on par with Antoni GaudĂ­, the legendary designer of the Sagrada FamĂ­lia in Barcelona and a host of other famous Spanish buildings. Karastamatis says Mirvish admires Gehry's "built to last" sturdiness.

The three proposed towers, ranging in size from 80 to 85 stories, close to the height of First Canadian Place at King and Bay, are designed to be complimentary. As Gehry explained during his presentation, the separate designs are supposed to suggest movement.

The Mirvish+Gehry project (to use it's semi-official working title) will, if approved, be completed in three phases over the next decade or so. The first phase, the east tower, includes space for a new OCAD U research centre, studio block, archives, and a public lecture hall.

The new Public Learning Centre for Visual Art, Curatorial Studies and Art History (OCADUPLCVACSAH, luckily also a working title) will be the first satellite campus for the McCaul Street school and its biggest expansion construction of the Sharp Centre for Design.

Details might be a little sketchy, but David Mirvish's 60,000-square-foot home for his personal collection aught to be a significant draw for King West. According to the press release distributed yesterday, the building at the corner of King and John - the last to be built - will feature a curated permanent collection of works from Jack Bush, Anthony Caro, Helen Frankenthaler, Morris Louis, Robert Motherwell, Kenneth Noland, Jules Olitski, Larry Poons, David Smith and Frank Stella.

Both architect and landowner were keen to play up the museum's public green space - or "floating garden" - which will be accessible from John Street. 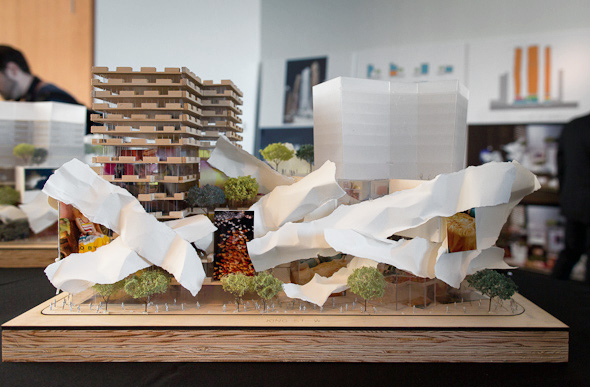 What we could lose

Whether or not you care about this will really depend on your dedication to the performing arts. Mirvish Productions' John Karastamatis told me many of the negative comments he's heard surrounding the removal of the 19-year-old theatre so far have often come from non-customers.

Karastamatis also says Mirvish believes he will have enough performance space left with his remaining theatres. He didn't rule out the possibility of Mirvish replacing the Princess of Wales Theatre elsewhere.

The Royal Alexandra Theatre, a heritage building near the development, also owned by Mirvish, will remain untouched on the construction site's eastern edge.

The Princess of Wales Theatre might be just a teenager but the buildings that make up the rest of the block are considerably older. Before the area was a theatrical and cinematic hub, Ed Mirvish worked hard to save the former warehouses on the north side of the street.

While they might not be highly significant in terms of the overall history of the city, they are worth factoring in to the equation. Choosing to tear down a historic building - let alone an entire block - should never be an easy decision, but what we stand to gain here is also potentially incredibly big for the city.

So, let's throw it out there. Do you think the buildings between John and the Royal Alexandra Theatre is a fair price for what could become a city-defining set of structures? How much faith should we put in Frank Gehry to deliver something that will significantly alter Toronto's skyline? If not him, who else?