How to survive a zombie apocalypse in Toronto

A dishevelled man in bloodied hospital scrubs stumbles into Yonge and Dundas Square. He grunts at the gathering weary crowd and suddenly collapses. A nearby police officer runs to help. Without warning, the man grabs the officer's arms and bites into her flesh.

Within an hour, Union Station is a feeding frenzy. Subway trains screech to a stop and passengers jump off and scramble down dark tunnels. Within an evening, grocery and drug stores are looted dry. The DVP and 401 are littered with cars and carcasses. Within a week, electricity is out, Twitter is silent, and the skyline recalls the dead darkness of the 2003 blackout.

A zombie outbreak in Toronto could happen! To commemorate Saturday's Toronto Zombie Walk, I ask one of its organizers as well an author, bookworm, gamer, film buff and professional runner for tips on how to prepare for and to survive a dawn of the dead.

Seek Shelter
Zombie infection spreads at lightning speed and the undead will quickly outnumber the living. Find shelter first, says Adrienne Everitt, Head of the Security Team for Toronto Zombie Walk. "Hopefully you're at home. If not, evaluate the amount of time it will take you to get home, if you can get home, do so. Then turn out the lights and barricade windows and doors. Don't broadcast that you're alive." Translation: Stop tweeting and start surviving!

If you can't get to home, find a place that you can easily fortify, advises Luis Ceriz, owner of Suspect Video, who interacts with rabid zombie fans. "Like the top of the CN Tower. Zombies would take weeks to climb that single stairway!"

Build A Survival Team
There's safety in numbers. Chris Szego, Manager at Bakka Phoenix Books, Canada's oldest sci-fi and fantasy bookstore, lists her dream team. "Someone who knows about weapons; how to engineer jury-rigged machinery; with a Jeep; who works at a grocery store and has keys." Verify that you're not the weakest link. "Make sure your group has at least a few people slower than you. If you're the slowest and least fit, find another group!"

Recruit a gamer. "Gamers have thought about zombie outbreaks over and over again," says Jaime Woo, festival director for Gamercamp, which takes place November 3 and 4. "They'll be the first ones to suggest turning that house door into a raft. They're also used to thinking tasks like unlocking something are fun. The only setback is that they're used to killing pixilated opponents and will be shocked by how tired they get after, like, the second zombie." 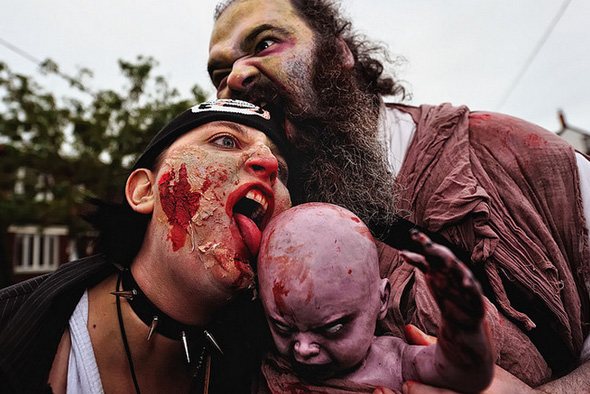 Study And Know Thy Enemy
Here's a crash course on zombies from Corey Redekop, author of Husk, a recently-published and acclaimed zombie novel set in Toronto. "Zombies are attracted by smell, noise, and shiny things. They cannot be reasoned with. There is nothing left inside personality-wise, so don't think that just because she was your mom, she'll remember you. Try this, and you'll be eviscerated in no time." And yes, shoot them in the dead!

Books and movies are handy for learning about zombies. Szego suggests The Zombie Survival Guide by Max Brooks as an essential read. Ceriz suggests a few options for movies: "First, you've got to determine what kind of outbreak you're dealing with. Watch 'Shaun of the Dead' (slow, shambling) or 'Return of the Living Dead' (biological, unstoppable) and 'Serpent and the Rainbow' (good old fashioned voodoo zombies). Then for preparedness, watch both versions of Dawn of the Dead and learn from their mistakes!"

Gather Your Survival Tools
Stock up on essentials, says Everitt. "Electricity will fail, which means no water. So fill your tub and sinks with water and any containers you have in your house." Gather up canned foods and medicine. If you can make it to a hardware store, like Canadian Tire, scavenge for things you can use for offence and defence. Dress appropriately. "Having clothing for all weather conditions is important... this will keep your morale high."

Chances that you will wield a rifle during an outbreak are not realistic. Woo suggests finding or fashioning a weapon that is reusable and not ammo reliant. "Someday, I'll get lessons on wielding a bo staff. It worked for Donatello," he says. Use what you have at home, too. "How do you think zombies feel about sriracha?" 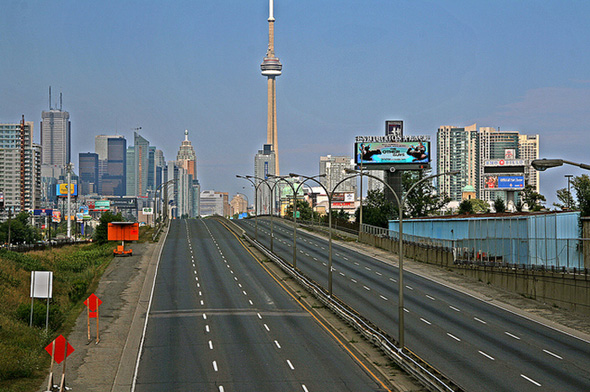 Learn To Run
Zombies - old school ones, anyway - are slow as hell. Couch potatoes, don't fret. The Running Room offers a ten-week beginner Learn To Run program at its 10 Toronto locations. "Learn the basics of proper gear for all weather conditions, nutrition, goal setting, injury prevention and more - everything you'll need to outrun the zombie horde," says Running Room Marketing Co-ordinator Owen Bowles. "Every year, we help prepare over 50,000 people for the zombie apocalypse, from beginner level up to those who want to hedge against marathoner zombies."

GTFO Of The City
Wait a few days till the initial chaos subsides and then get out of the city if you can. Pack essentials, like water and food, with you. "There are too many ways to get trapped in the city, particularly if the zombies have gathered into a swarm," says Redekop. "Get out in the open where you can see the zombies coming. Hopefully, by the time they're done feeding in the city, they'll have rotted to a point where you can sever their heads with a butter knife."

Photos by eudĂŚmon, x2, and Duke 360 in the blogTO Flickr pool.