In case you missed it yesterday, a report published by the Toronto Transit Commission says Toronto needs make construction of a new east-west subway a priority over all other transit projects. Without a Downtown Relief Line, the Yonge subway will be completely unable to manage the projected ridership increases in the coming years, it says.

As city hall watchers will know, the DRL has been long been a dream of writers, transit planners and straphangers caught in the rush-hour crush. The line's history is almost as old as underground transportation in Toronto itself, with origins in the nixed Queen subway line and the 1985 "Network 2011" plan that also called for Sheppard and Eglinton West lines to support the existing subways.

The big question, as it was then, is whether the TTC can actually get the thing built. The report offers several different versions of the DRL, the cheapest coming in at around $3.2 billion to connect King and Pape stations. The most desirable, and most expensive, option - a line from Dundas West to Flemingdon Park via St. Andrew and King - could set the TTC back a gigantic $8.3 billion.

Now that new ways of funding new transit projects are starting to make it onto the table, a renewed push for the line could gain some traction if it's supported by taxpayers. The fact the proposed subway doesn't serve Scarborough and Etobicoke directly could be a sticking point for some, however. 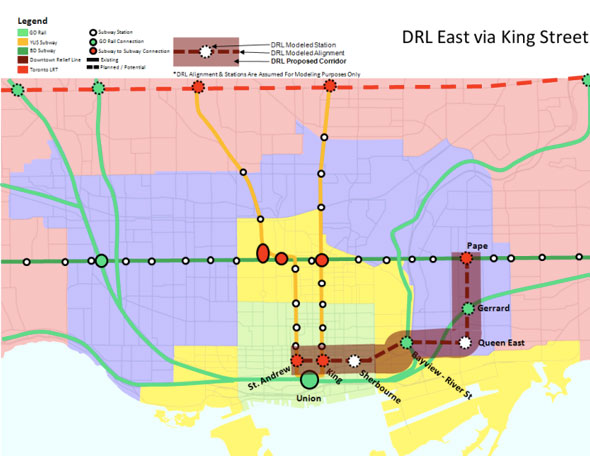 Yesterday, the University of Toronto's Institute on Municipal Finance and Governance (IMFG) published a report outlining some of the lessons Toronto and the wider area could learn from other American cities as it tries to push forward with new transit.

The salient point appears to be that someone at the provincial level needs to take the wheel and steer support, funding, and construction of any new work. Without strong leadership and grassroots public consultation, new projects are unlikely to gain traction, it says.

As always, the core issue is money. City manager Joe Pennachetti outlined 10 ways of securing new transit funds earlier this month with estimates on how much each tool could conceivably raise. Here's a list of the big-ticket items:

If this latest version of the Downtown Relief Line - a connection from Dundas West to St. Andrew, King and Pape at least - is to become a reality one or more of these charges will have to become a reality. The TTC's report says Metrolinx should make the DRL the top priority in its Big Move strategy, a project that's still $2 billion a year short.

The provincial agency currently estimates relief for the Yonge line to be 16 to 25 years off. By then, the TTC says, the Yonge line will have reached critical mass and started hindering access to the city. If something's going to happen, it needs to happen now.

It's going to feel like spring in Toronto this weekend