Recently, it seems like there's hardly a beat between headlines connecting Rob Ford with allegations of dubious conduct. In just a few weeks we've had the streetcar door incident, the reading at the wheel escapade, the conflict-of-interest trial, and the football team debacle.

This week's discussion mostly surrounded repairs to a stretch of road near the Ford family's business, Deco Labels & Tags, in Etobicoke. Below there's a primer on the company.

Also in this week's post is a brief history of the lovable - and soon to be endangered - subway token.

The Friday parade ran from Bay Street to Maple Leaf Square near the Air Canada Centre and even featured a brief cameo from mayor Rob Ford. According to The Star, several thousand people, many of them school children, turned out to line the route.

A closer look at the Ford's Deco Labels & Tags 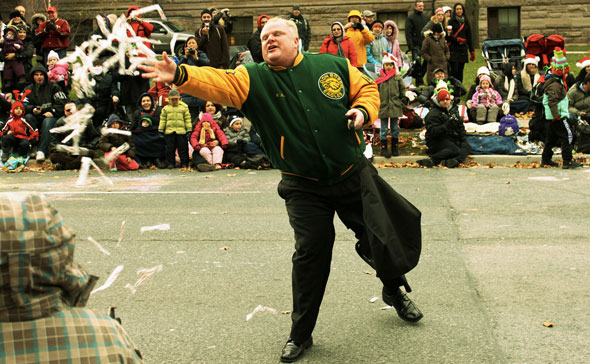 Rob Ford returned from a two-day trade mission to Chicago this week to more criticism of his leadership. The current controversy surrounds a small stretch of road outside the Fords' family business, Deco Labels & Tags on Greensboro Drive near Kipling and the 401. According to newspaper reports, the mayor pushed city officials to make unscheduled repairs on the road in time for the company's 50th anniversary celebrations.

Here's a little background on the Ford family business.

Founded by Douglas B. Ford, father of Rob, Doug, Jr., and the lesser-known Kathy and Randy, in 1962, Deco specializes in pressure-sensitive labels and tags for grocery products. The company also deals in custom print and packaging jobs. Located close to Don Bosco Catholic Secondary School - the site of another controversy - the business is now a multi-million dollar concern with roughly 100 employees.

Deco has offices in Toronto and Chicago (yep) and, according to the company's mission statement, aims to be "one of the premiere label companies in the industry." Douglas B. Ford, a former MPP for Etobicoke--Humber, died of colon cancer in 2006.

In other Douglas B. Ford trivia, the former politician swam beside Marilyn Bell in an attempt to cross Lake Ontario with the famous swimmer. He also played guard for the East York Argos.

A brief history of TTC tokens

Provincial transit agency Metrolinx announced this week it will seek an private operator for its new Eglinton-Scarborough Crosstown LRT line instead of the TTC. As a result, the TTC will only be involved in designing interchange stations where the new service connects with existing subway lines - nothing more.

As a consequence, the humble, delightfully out-dated TTC token is likely headed for the scrapheap. Here are some fun facts on those tiny little coins.

Introduced in earnest in 1954 to coincide with the opening of the Yonge line, the aluminum coins pressed by the Royal Canadian Mint were intended to combat the growing problem of counterfeit tickets winding up in the fare box. Prior to 1954, tokens were made of brass.

The TTC has circulated millions of tokens in various designs over the decades - including a commemorative edition on the opening of the Bloor-Danforth line extensions - always pausing before a fare increase to prevent hoarding.

In 2006, an investigation by various police agencies including the FBI broke a huge token counterfeiting ring based in the United States that was estimated to have cost the TTC over $10 million in lost fares. The fakes were so widely circulated that the even official vending machines dispensed them.

Like many major cities, Toronto has been bursting at the seams for hundreds of years, absorbing smaller towns in its wake in an endless clatter of construction. This 1951 National Film Board video shared by Spacing writer Jonathan Zettel Friday shows Toronto the "Boom Town" a city "growing like mad, bursting at the seams."

Enjoy the delightful, wide-eyed wonder from the narrator and the vintage shots of the city: