The impeding trial and court appearance by Toronto mayor Rob Ford dominated headlines this week. Ultimately, Ford's job could be on the line if the judge rules he deliberately broke provincial conflict-of-interest rules. In case you missed it, I've provided some background on the case set to kick off Wednesday.

Down at the waterfront, a new 300-space underground parking garage opened near the Harbourfront Centre. While the opening of a new vehicle storage area isn't usually cause for fanfare, this one has some pretty neat design features I think you'll find interesting. Also, the Sheppard subway is turning ten in a few short months and there's some numbers on that, too.

For the 63rd time, the Ex will wrap up with the Canadian International Air Show roaring through the skies over Toronto. This year, budget constraints by the U.S. Air Combat Command - an American group that normally performs at air shows - means fewer U.S. aircraft will be taking part than in previous years.

During the show, 26 aircraft will rattle downtown windows with aerial displays and acrobatics. The Canadian Forces Snowbirds - a perennial favorite at the show, shown above - will carry 700 litres of jet fuel in each CT-114 Tutor aircraft during the performance. The team undertook roughly 100 practice flights in Moose Jaw, Sask. in preparation for this weekend. Here is the full schedule. 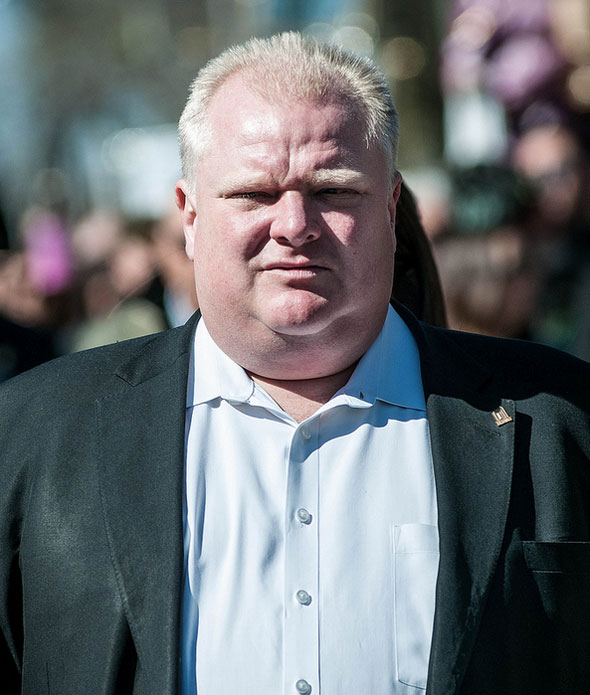 As you should already know by now, mayor Rob Ford will appear in court this Wednesday to face allegations he broke the Municipal Conflict of Interest Act on February 7, 2012 by participating in a council vote he was set to financially benefit from. In case you missed anything, here's a little background.

The story starts in 2010 while Ford was still a city councillor. That year, Ford used his official city council letterhead to solicit donations to the Rob Ford Football Foundation from registered lobbyists and companies that had dealings with the city. Toronto's integrity commissioner, Janet Leiper, ruled Ford was in breach of council guidelines and recommend he personally pay back the $3,150 he raised as a result, a decision council agreed with.

Trouble is, Ford didn't pay back the money. In 2012, Leiper spoke at council asking the mayor to provide proof that he had returned the money out of his own pocket, not the charity's coffers. Ford told council there was "no sense" in him paying back the money because it had already been spent on football equipment.

Crucially, the mayor then voted to overturn the order to return the money along with a majority of councillors when he should have abstained to avoid breaching the conflict-of-interest laws. This action is what triggered the legal action that will see they mayor speaking in court on Wednesday. If the judge decides a Ford deliberately broke the act, he could be automatically removed from office.

Here's a full transcript of Ford's pre-trial deposition from earlier this week.

The Harbourfront Centre's new 300-space, state-of-the-art underground parking lot opened this week, replacing the old surface lot near York Quay. As you can imagine, sinking a parking lot underground near the water is a significant engineering challenge as anyone who has tried to dig a deep hole at the beach will understand. Once you hit water, it tends to come to come pouring in, especially when you're working with landfill instead of soil.

As the National Post's Natalie Alcoba points out, the $25 million cost of the lot works out to roughly $100,000 a space. A unique, three-storey glass sculpture by architect and designer James Carpenter set into the centre of the lot will reflect daylight from the surface into the depths of the space and reduce lighting costs.

To keep the lake at bay, the lot includes special retaining walls that create a "bathtub" effect (except the water stays on the outside - imagine placing an upright glass into a sink of water.)

Two new parks - Canada Square and Ontario Square, shown above - will be built on top of the garage at surface level this winter. Canada Square is described in a Waterfront Toronto press release as a "vertical garden" containing 44 Redwood trees. Ontario Square will be a "series of miniature forests" of Ontario Aspen trees near the parking garage entrance. 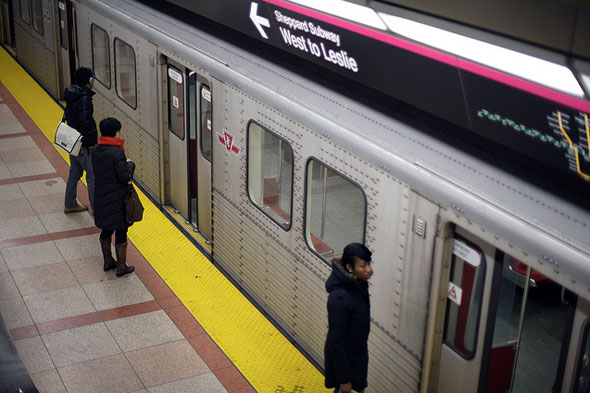 Toronto's newest and shortest subway line, the much-criticized Sheppard route, turns 10 years old in a couple of months. Over the last decade the debate about the subway's ridership figures, its future, and relationship to the new LRT line coming to the busy east-west street has never really died down. Here are some facts about the purple route.

Opened November 22, 2002 after eight years of construction, the 5.5-kilometres, 5-station route is the only underground line on the TTC network to be fully accessibly for wheelchair users at all its stations. The average weekday ridership is around 47,700. In contrast, the jam-packed Yonge-University-Spadina line sees 714,210 people on a normal week day.

The Sheppard line cost just under $1 billion and is the only subway tunnel in Toronto cut entirely using tunnel boring machines. Special design allowances were made at each end of the line to make extensions easier. A roughed-in, "Spanish solution" centre platform currently sits idle at Sheppard-Yonge for when ridership increases. Due to lower number of passengers, the subway trains are four instead of six cars long on the line.