The banners are in reference to the new 47-storey, 304-unit condo proposed for 321-333 King Street West â right in the heart of the Entertainment District's "restaurant row." If brought to fruition, the building will maintain its front heritage facade, which will be integrated into a three-storey podium, set atop a five-level underground parking garage.

And while developer King Financial Holdings is all but tickled about the plans, the restaurateurs running their businesses along King West are not. They have expressed a number of concerns, including that of a wind tunnel effect and blocked sunlight. But most of all, says Kit Kat owner Al Carbone, the development threatens to erode the culture and atmosphere of the King West restaurant strip.

Al has become somewhat of a spokesperson for the restaurateurs along King Street West, especially since some business owners find themselves tied to a lease under the developer's name. "But most of the restaurants here are on board," Al says. "They don't want to see a tall tower being built."

Al plans to speak in front of the Ontario Municipal Board at an upcoming meeting on October 3. His goal for that day is essentially to postpone; in his words, "To get a new date so we have more time to get the professionals we need working with us and to create more public awareness."

The public awareness aspect is already underway with the aforementioned banners and a Save Restaurant Row website with more information. Al says with the right lawyers and city planners on board, he's optimistic he can halt the 47-storey project. 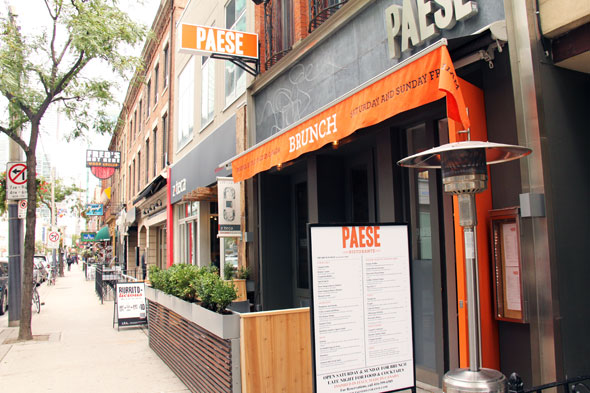 But if recent amendments to the plan show anything, the prognosis for stalling development looks incredibly bleak. The original proposal (which the City rejected) included 323-333 King West but not the land at 321 King West. That land (which eagle-eyed readers will recognize as the current address of Fred's Not Here) has since been included. As well, that first proposal showed a tower that was 39 storeys with 201 units, but with the inclusion of 321 King West, the proposed structure is now six storeys taller with over 100 additional units."It is going in the wrong direction," Al concedes. "But, still, we have to do everything we can to stop it."

"We've been here for so long," he continues, citing his 25-year business residency on the Street, "and now that we've developed and nurtured it, they want to come in. It will destroy the block." Although the development plans indicate a commitment to retaining the facade, and therefore some of the historic appeal of the row, they also speak to the inevitable short and long-term effects of construction, such as road closures, pollution, and even the deconstruction, and subsequent reconstruction, of portions of the "restaurant row" facade.

Tony Elenis, president and CEO at Ontario Restaurant Hotel and Motel Association, says the restaurants in the immediate way of the proposed structure are only the beginning (though can't confirm exactly what will happen to the businesses currently in the condo's way). "In the long term," he says, "I'm afraid it will ruin what has taken so long to build. That area is just not going to be the same."

Al says he and the other restaurant owners on restaurant row aren't necessarily opposed to some sort of development on the street, adding that there's a 33-storey building plan that will threaten his back patio sun that he's decided to leave alone. But the scale of this proposed tower will, simply put, dominate over the strip.

"It's the wrong place for a tall tower."