Is Toronto overpaying for BIXI bike-sharing?

Housing isn't the only thing that is costly in the centre of the universe these days. The city that looked like a pretty good deal back in the era of the 65-cent dollar is getting rather expensive, and we're not just talking sports tickets.

So it's perhaps no surprise that when it comes to transportation, Toronto is no cheap date. The TTC is the most expensive single-fare transit system of any big city in North America, and the under-construction Airport Rail Link may well match this feat when it finally opens. While the T-Dot may not have congestion pricing or in-city toll roads, cabs are definitely a pricey proposition as well. But what about the city's newest mode of transportation, the BIXI bike-sharing system? With North America's biggest bikeshare program about to launch in New York, now seems like a good time to take stock of bikeshare costs across the continent to see how Toronto measures up.

The table below shows all cities in the US and Canada with a public bikeshare program of more than 100 bikes. All of these systems use the membership-model for revenue; the actual bike rides are free when kept under 30 minutes (sometimes longer). There are many variations on pricing, but the simplest head-to-head comparison is the cost of an annual membership — the bread and butter of these programs. 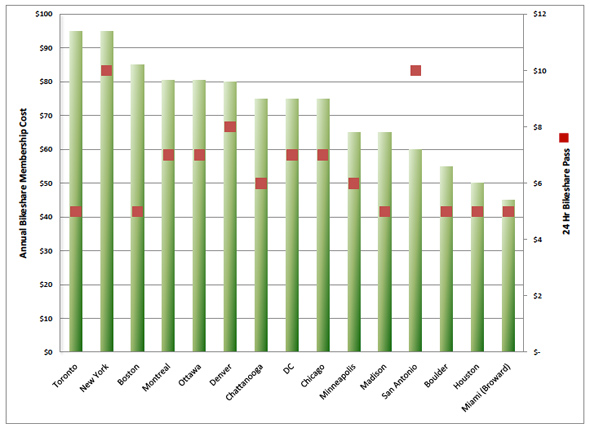 As the data shows, Toronto is unfortunately once again fighting for the top spot in the most-expensive category. And while in Toronto your membership only gets you a 30 min jaunt without incurring extra cost, the same $95 in New York will cover a 45 minute ride — an indication of the scale and ambition of their planned installation.

On the plus side, BIXI in Toronto is year-round, not an insignificant factor when compared to, say, Montreal or Boston. And at least BIXI managed to get off the ground in Toronto, which given the current mayor and corporate financial woes of the provider was something of a miracle. Other big Canadian cities, after all are still struggling to get their programs even started.

What do you think? Is BIXI still a bargain for Toronto bicyclists, or is the city getting burned on costs yet again?

In response to some of the comments, we've updated the tables to show short term data and to adjust the initial assumption on Miami Beach.