That time when the Don River was straightened

Not too long ago (in the grand scheme of things) the lower portion of the Don River from Winchester Street to its mouth at Ashbridges Bay was a gentle, meandering stretch of water lined by willow trees and marshland much like the lower reaches of the Humber or Rouge. Several islands in the river provided a destination for recreational boaters and a refuge for skaters in the winter. That was before the "Don problem."

The Don that flows in a perfectly straight line beside the southern portion of the Don Valley Parkway today is a solution to that problem created in the late 1800s in an attempt to tackle rising pollution levels, health concerns, frequent costly floods and regular silt blockages around the port of Toronto that obstructed shipping. 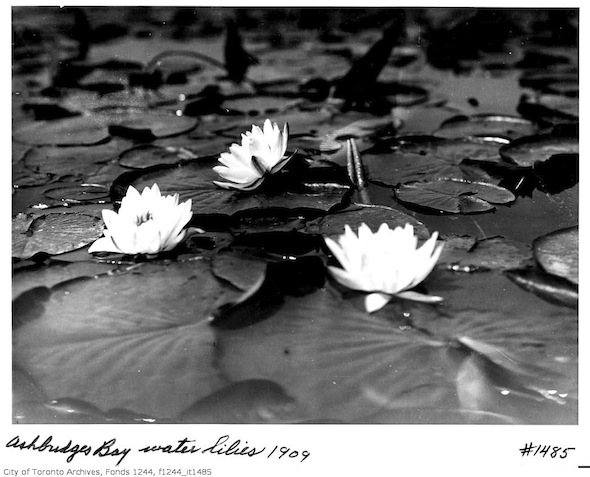 According to Jennifer Bonnell, a postdoctoral fellow at the University of Guelph who wrote her PhD thesis on the Don River, in the early 1880s politicians began to explore ways of wringing as much money as possible from the river and its environs. If the winding, variable depths of the waterway could be straightened and dredged, they thought, boats could access the industrial lands in the valley. A tamed version of the Don could also provide room for an alternative rail corridor into the city.

Charles Sauriol, a champion of Don Valley conservation, in his book Remembering the Don: A Rare Record of Earlier Times Within the Don River Valley says then-mayor William Barclay McMurrich was inspired by the straightening of the Cuyahoga River in Cleveland while attending the funeral of US president James A. Garfield and decided to apply the concept at home to boost the local economy. 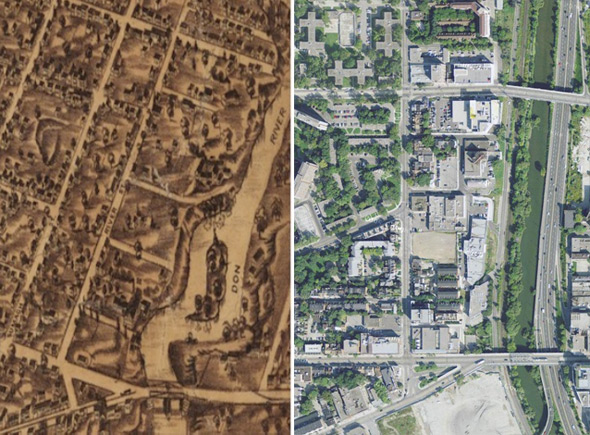 Alderman Davies, a politician under McMurrich, soon formed a company to purchase the land in the lower valley required for the engineering project. According to the Globe on the 8th January, 1881, the project intended to "render the Don navigable for large craft."

In September 1886, a public referendum on the proposed engineering work, dubbed the "Don Improvement", gave the official go ahead for the city to borrow provincial funds and break ground. An initial estimate came in at $300,000 to straighten the river south from Winchester Street.

In the fall of 1886, a team of workers led by Manning and MacDonald dug a 14-feet deep dog-legged channel south from Winchester Street that sliced through the middle of several turns in the river. Five small islands in the path of the channel were simply dug out. The sides of the new Don were piled with cedar, rock elm and white pine to ensure the banks remained stable. The original course of the river was filled with material dug from the valley walls.

As Bonnell notes in her thesis, The Globe portrayed the construction in great detail:

"The dredge, with its everlasting creak of the huge iron spoon sinking, filling, rising, swinging and dropping, and [proceeding] along the piling which continues nearly to the Gerrard Street bridge... [one] arrives at the chief scene of labour, about midway between King and Gerrard streets....

[Here] as far as the eye can reach up the valley [one] sees the high banks of sand at the side dotted with men and horses, single and in teams, waggons and carts hauling earth down into the hollow, and shovels flying around as if by magic as the teams string along empty up the bank, pause for a few minutes, descend with a load, dump, and string along up again with as much vigor as before."

"In the centre of the valley the eye follows along the two rows of piles till each terminates in a huge ladder-like, black-looking machine, puffing and snorting in short gasps, while every few seconds there comes from it a report like that of a small cannon. These are the pile-drivers. Heaps of long cedar logs lie all around, being trimmed for piles. Men on rafts are seen floating about with various objects. Some are conveying logs to the pile drivers, others are finishing up the tops of the piles which have already been driven, hewing them off and fitting on what appeared to be a sort of timber cap. Between the rows of piles men are busy digging out the new channel, while a constant stream of wheelbarrows, pushed by the laborers with almost automatic regularity, convey the earth from the excavation to the bank of the river....

All around are numerous small boys in the costume which antedated fig leaves, diving out of scows or jumping off the piles, regardless of dirt-dumpings or sun-skinned backs, laughing, shouting, swimming and spluttering." 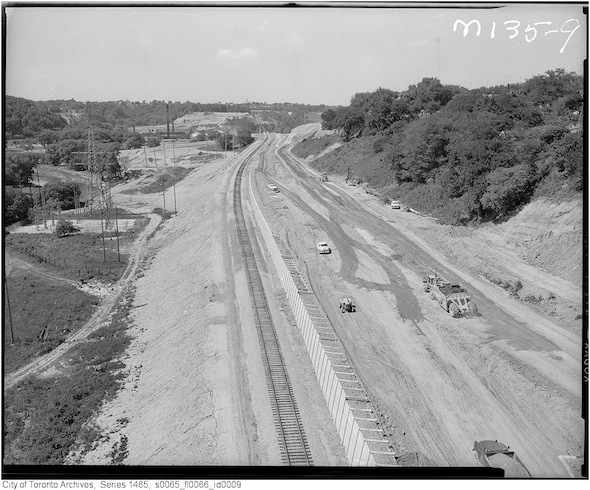 The project, like almost every engineering undertaking in history, turned out to be considerably more costly and time consuming than initially expected. In the end, the channel cost $580,000 - almost double the estimate. On completion, a row broke out between Grand Trunk and Canadian Pacific Railway over the rights to the new railway lands that escalated to the point the rival companies barricaded each others tracks.

Eventually, the workers fell into a brawl that provided great entertainment for many locals, according to Charles Sauriol. The dispute was eventually resolved by the Privy Council who ruled the CPR tracks should stay on the east bank and Grand Trunk on the west.

After several changes the river's outlet at Asbridges Bay, the current Keating Channel alignment was eventually completed in 1914. The strange right-angle connection between the river and the channel, which is still present today, came about over a land dispute between the city and the British American Oil Company who didn't want the river to cut through their property.

The wooden piling at the side of the river was reinforced during construction of the Don Valley Parkway in the 1950s and 60s â the straightened section of river was extended slightly further north at the same time. Now that most heavy industry has left the Port Lands, the straightened Don stands as a relic to the city's industrial past. And as budgetary issues make it seem less and less likely that the mouth of the river will be re-naturalized as part of Waterfront Toronto's revitalization plans, this legacy may live on for many years more.