The Bloor Street United Church at the corner of Bloor and Huron Street will likely be redeveloped to host the headquarters of the United Church of Canada, a condo tower, and an improved space for church services and other meetings. Like several other proposed and under-construction developments in Toronto, the designs available on the church's website show a mix of angular modern design mixed several historic features of the original structure.

Under the plans currently available online, the original nave will be replaced with a large, glass-walled square space to allow in the maximum amount of sunlight. The area behind the church, currently a parking lot, will form the base of the General Council offices and condominium tower. The appearance and layout shown here is preliminary, but the design is one favoured by the church.

The Bloor Street United Church was selected from several locations in Canada vying for the new headquarters. The lease on the current offices at Bloor and Islington will expire in 2015, which prompted the church to look for a new space. The location in the heart of Toronto and the local congregation were apparently key factors in the decision. 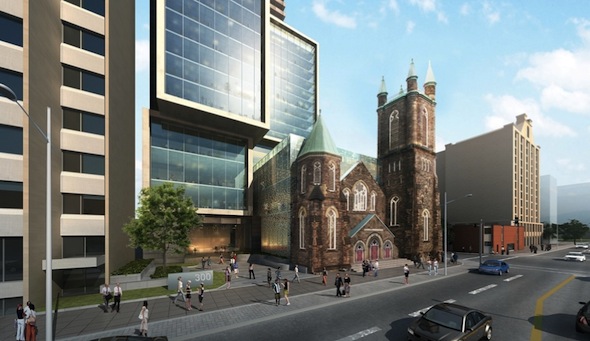 Michael Hilliard, the chair of the church's redevelopment committee, says no matter what happens, the protected facade will remain. "Whatever is ultimately done ... the remainder of the building will be redeveloped into new, flexible, environmentally-sound space, which it currently isn't."

The green features could include LEED designation - an internationally recognized level of excellence for sustainable and eco-friendly buildings - and a green roof on top of the redesigned nave. The architects behind these designs, B+H, are also (partially) responsible for another Bloor street icon - the modern extension to the ROM. The still under-construction Ripley's Aquarium near the CN Tower is also in the company's portfolio.

"Within the congregation, everybody is very excited," says Hilliard. "The outcome of this, we hope, will be a great, new, accessible, environmentally-sensitive space. That's not to discount in any way the attachment many of us feel to our existing building, but at the end of the day we felt that in order to do the kind of ministry we wanted it made sense to make this move." 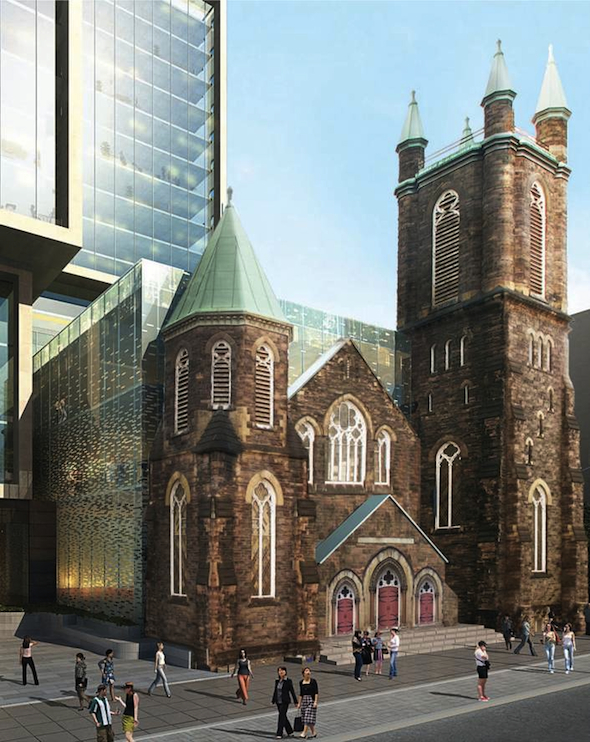 The church hopes to have the new building ready sometime in 2017, though that could change depending on how the development progresses in the coming months. The church met with the community and local councillor Adam Vaughan last night to discuss the project and initiate the process of getting council approval. If all goes to plan, the builders could break ground within two years.

What do you think of the proposed design?