How the TTC sullied the reputation of LRT (Part II)

In Part I of my look at how the TTC has sullied the reputation of LRT, I focused on the TTC's communications on surface rail, where "LRT" somehow meant "Streetcar Rapid Transit" but "SRT" meant "Scarborough... RT"? Plus, while there were 75 km of streetcars and 6 km of RT, only the latter could be found on a map. In confusing light rail with streetcars, and streetcars with buses, the TTC soiled the very sound of the letters L-R-T before the city even built any "real" Light Rail Transit lines.

But maps and words only matter so much. What about the experiences of actually riding the streetcars and the RT as a transit user? And as a tourist? How do those factor into the anti-surface rail venom found in letters to the editor, online forums and public meetings? In Toronto of all places? In an era when dozens of cities are racing to build new streetcar lines and LRT routes?

One cannot drive around downtown Toronto without at some point staring out the windshield at the back of a streetcar. Similarly, no one can ride a streetcar without sooner or later fuming at a stuffed transit vehicle being held up by a single-occupant car double parking or waiting to make a left turn. Mixed-traffic operations are by their nature infuriating for all. While the planned Transit City lines would have featured separate Right of Way (ROW), the continuing experience along the traditional mixed-traffic streetcar lines downtown remains a major motivation for the underground-at-any-cost crowd.

Even so, the TTC has managed to make matters worse. While many problems such as traffic enforcement or the narrow width of Toronto's colonial streets have been beyond their control, streetcar operations have remained far too anchored in the 1940s. Some examples:

Bottom line: riding streetcars in Toronto is more or less the same experience for a financial services worker today as it was for that person's grandmother headed to the munitions plant in 1940. There is really no excuse for that.

The Sad, Sorry Tale of the RT 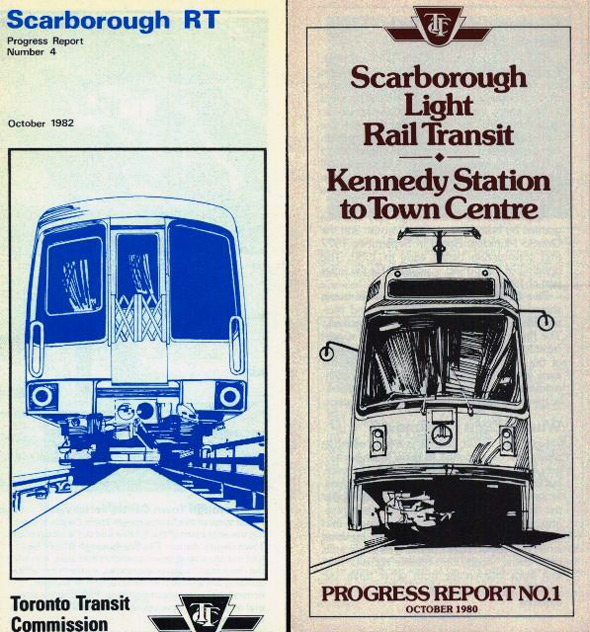 Where to begin with the Scarborough RT? This was the original story of modern light rail to the suburbs, gone horribly wrong. Extensive histories have been written elsewhere, but the important detail is that the TTC had a chance to build a "high-speed streetcar" line that would finally demonstrate the true LRT-based potential of the new Canadian Light Rail Vehicles. And they blew it.

Old marketing materials reveal the original streetcar intentions of what later became the RT. Had the province not interfered and pressured the TTC to convert the system to ITCS, who knows what Scarborough residents would think of "streetcars" and LRT today? The elevated trackway to McCowan could have served as the trunk line that then descended to grade and led to extensions in all directions. Instead of a small blue stubway at the end of the Bloor-Danforth line, the TTC map could have looked like the western end of the Philly SEPTA map where lengthy light rail feeds into 69th St Terminal. And it would have all happened years ago, with unlimited future expansion potential.

But that did not occur, and as a result Scarborough transit users today despise the RT as insufficient, unreliable second-class transportation that only shuttles them from bus to subway — further evidence in their minds of why even fully-grade-separated light rail is just a cheap excuse for "real" rapid transit. Few are aware of the lost streetcar/LRT potential of the original concept, and still fewer care. Trust in suburban surface rail was lost, never to be regained. 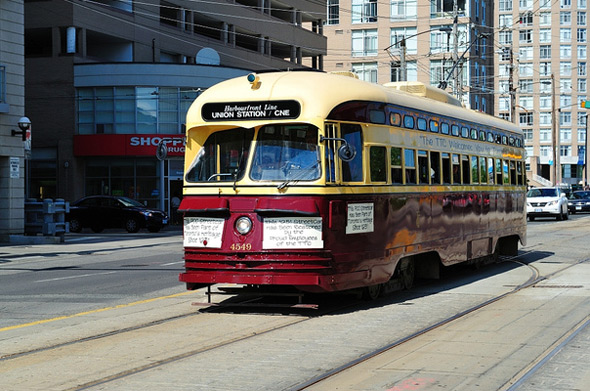 Torontonians are oddly unaware of the symbolism the streetcars command as an image of the city internationally. Try a google image search on "Toronto," and after you wade through pages of the CN Tower and skyline, streetcars start to pop up constantly. However, the TTC is famously tone-deaf to tourists, with no official merchandise store and no dedicated tourist website (as opposed to those found in, say, New York or Chicago).

This attitude from the city's own transit agency has long extended to the streetcar network. Instead of being treated like the tourist icons they are, and despite being one of the largest such networks in the world, streetcars here are officially considered no more special than buses. Besides the aforementioned problem with maps, the practical operation of streetcars ignores tourists. Compare this lack of attention to New Orleans, where the streetcars are also regular workhorses for commuters but extremely tourist-friendly, or San Francisco, where heritage streetcars have been placed on a special surface line downtown with high visibility to tourists.

Yet somehow those rather clear success stories were lost on TTC HQ. Instead of, say, creating a tourist-friendly loop around the downtown (as was done in Melbourne), or just keeping heritage vehicles in regular service, the TTC sold off its fully functional and beautifully restored PCC fleet in 1995, just five years after refurbishing them for the opening of the Harbourfront line (two remain in special charter service only). So while a tourist today can ride an old Toronto streetcar in San Francisco or Kenosha, Wisconsin, he or she cannot do it in Toronto. Oops.

Although not directly related to LRT expansions in the suburbs, the lost goodwill of the TTC's inactions on tourism still matters. Without idolized status, left exposed to political whims, the streetcars have become easy targets for those who argue against surface rail. That it could even be suggested that they be eliminated by a mayoral candidate was a stunning revelation.

Although the above list of miscues is substantial, to be fair none of the current LRT vs subway vitriol would be getting such a prominent hearing were it not for the deliberate actions of a certain former councillor from Etobicoke who drives an SUV and has stated on multiple occasions that streetcars "cause pollution" and "drive me nuts." Yet the TTC must still bear responsibility for the decades it has spent de-valuing the existing streetcars, not following best practices as their operation evolved, undermining the very definition of "light rail" and missing past opportunities to build new downtown tourist or suburban high-speed routes.

With a new chief executive looking for a fresh start, the TTC now has a chance to own up to past mistakes and take corrective action. An omnibus strategy of restoring lustre to existing lines by fixing the problems stated in this article would pay long-term dividends, reduce the chance of ugly PR incidents, and begin to restore the reputation of surface rail in the GTA. Only then might Toronto be able to move forward into its multi-modal future in peace.

Photos from the City of Toronto Archives, Transit Toronto, and Kenneth Lai