Looking back at the irreplaceable buildings we've lost in Toronto — Trinity College, Chorley Park, The Grand Opera House, to name a few — it's clear we only have ourselves to blame. A lack of conservation policy, a misguided attempt at improvement or simple neglect has sent many a worthy building the way of the wrecking ball.

Occasionally, though, disaster intervenes and buildings are taken from us against our will. As a sort of depressing companion to last year's top 10 buildings lost to demolition in Toronto, here's a look at the best buildings, in no particular order, snatched away by fire. 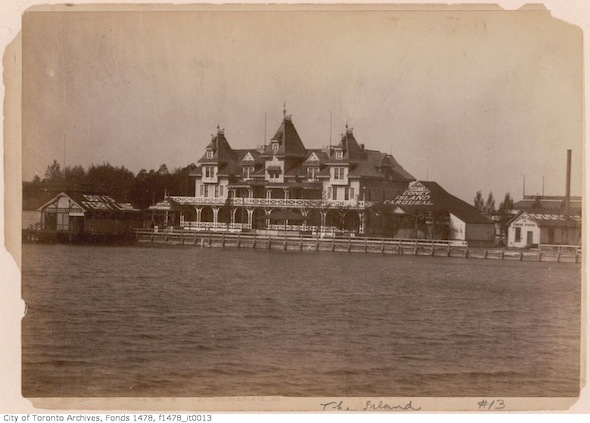 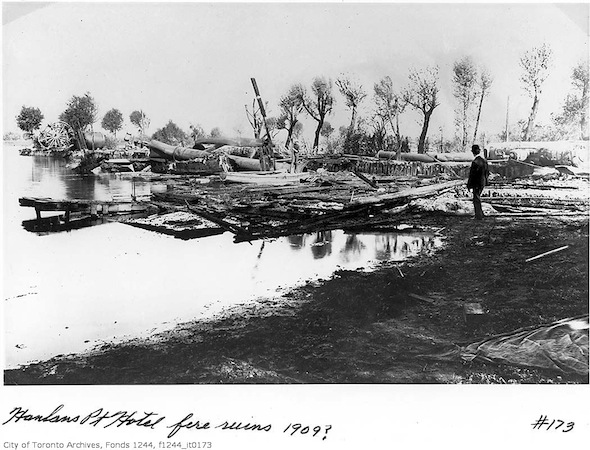 1880
Burned: 1909
What exists there now: Billy Bishop Toronto City Airport
What happened: The fire that claimed the Hotel Hanlan also devastated the amusement park, leaving only the merry-go-round and boat house among the charred remains. The structure's wooden frame, like many of the surrounding buildings, made it particularly susceptible to fire.
Why it's missed: Part of a larger complex of amusements that included a boat house, roller coaster and baseball stadium, Hanlan's Point was once comparable to New York's Coney Island. The Hotel Hanlan was a natural focal point for the local community and visitors to the park; Islanders picked up their mail and made the first phone calls from inside the hotel's walls. 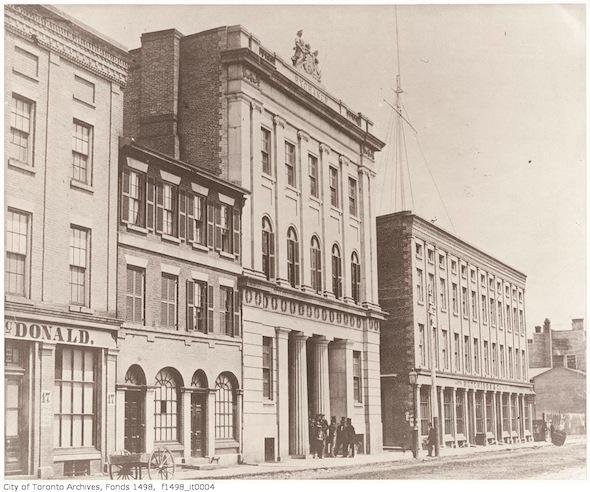 Built: 1852
Burned: 1930s (Demolished 1941)
What exists there now: The Wellington (condos)
What happened: Designed by James Grand, co-owner of the stationary business Grand & Toy, the Toronto Exchange became the headquarters of the Imperial Bank and then the home for the Board of Trade in later years, undergoing a redesign in the process. A fire gutted the building in the 1930s.
Why it's missed: Established as a space for the speculative sale of produce, the grand limestone Toronto Exchange on the corner of Wellington East and Leader Lane proudly proclaimed the prosperity of the fledgling city with its columned facade. 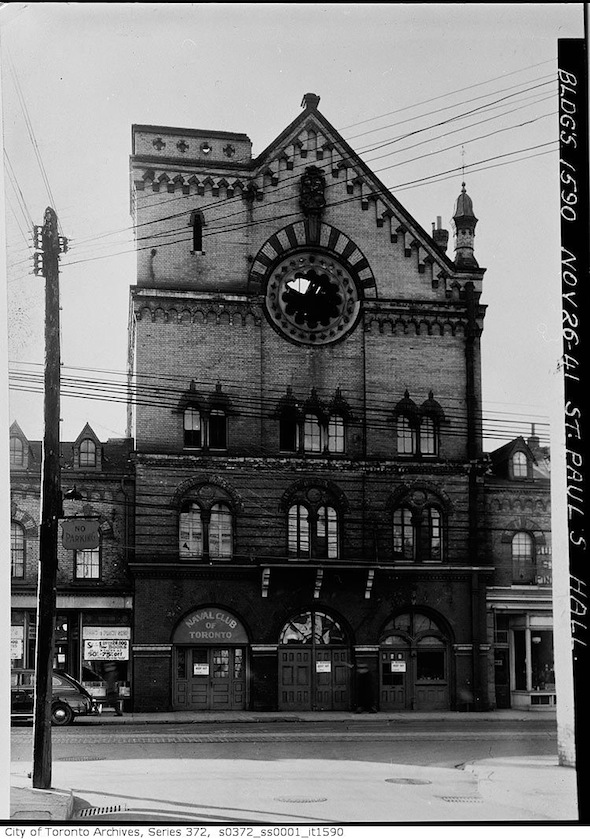 Built: 1860
Burned: 1941
What exists there now: 860 Yonge Street (Apartments and retail space)
What happened: While in use as a Navy serviceman's club, on the 12th November 1941 the building was gutted by fire leaving only a brick shell. St. Paul's Hall, as it was later know, was torn down in 1942.
Why it's missed: A pre-incorporation artefact, the gothic building with its red and white bricks and clock tower would have been a highlight of Yonge Street between Bloor and Davenport Road. The Hall's coat of arms was salvaged after the fire and hangs proudly on the front of Toronto Fire Services Station 312 on Yorkville Avenue. 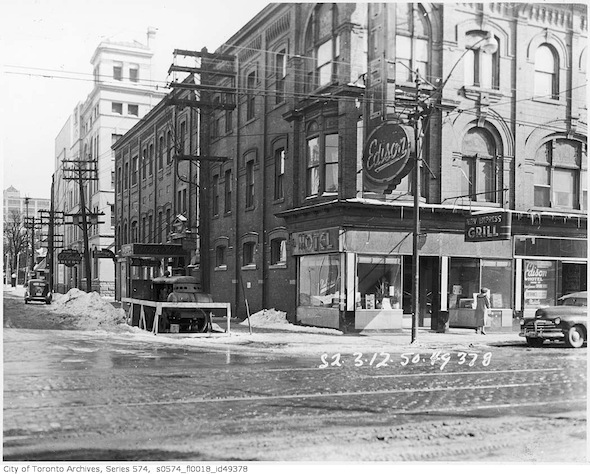 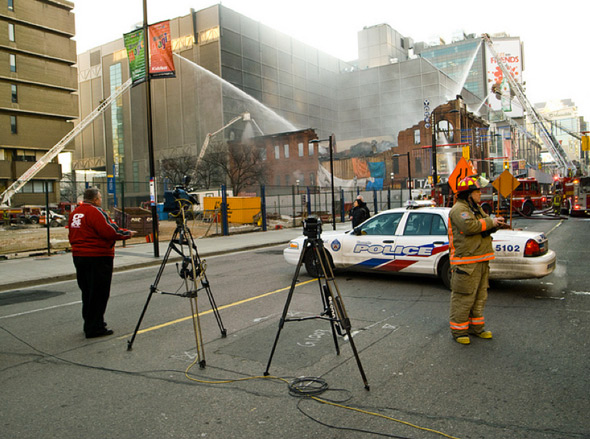 1888
Burned: 2011
What exists there now: Nothing yet
What happened: An as yet unsolved case of arson. Police are now using 3D technology to track down a suspect caught on CCTV.
Why it's missed: A prime example of demolition by neglect, the William Reynolds Block was a listed heritage building left to crumble in full public view. A wall collapse in 2010 failed to draw enough attention to save the building from further damage before it was gutted by fire in January 2011. 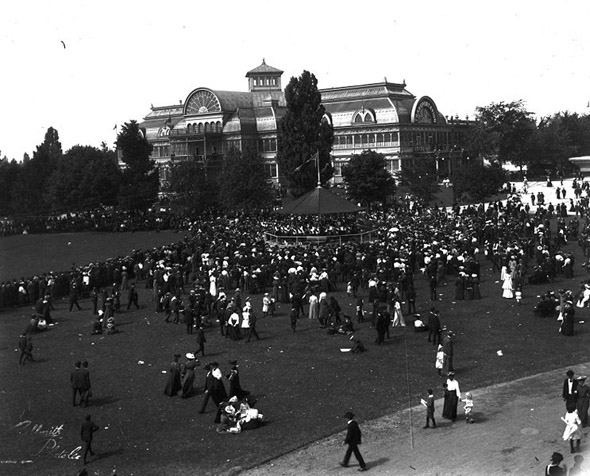 Built: 1878
Burned: 1906
What exists there now: Horticulture Building
What happened: Like its famous English and American namesakes, Toronto's Crystal Palace was also claimed by devastating fire. Flammable materials used in its construction certainly didn't help keep the fire at bay.
Why it's missed: An adapted version of the Palace of Industry (built in 1858), the Crystal Palace was the centrepiece of the 1878 exhibition. It and other buildings were integral in establishing what would later become the CNE in its current location. 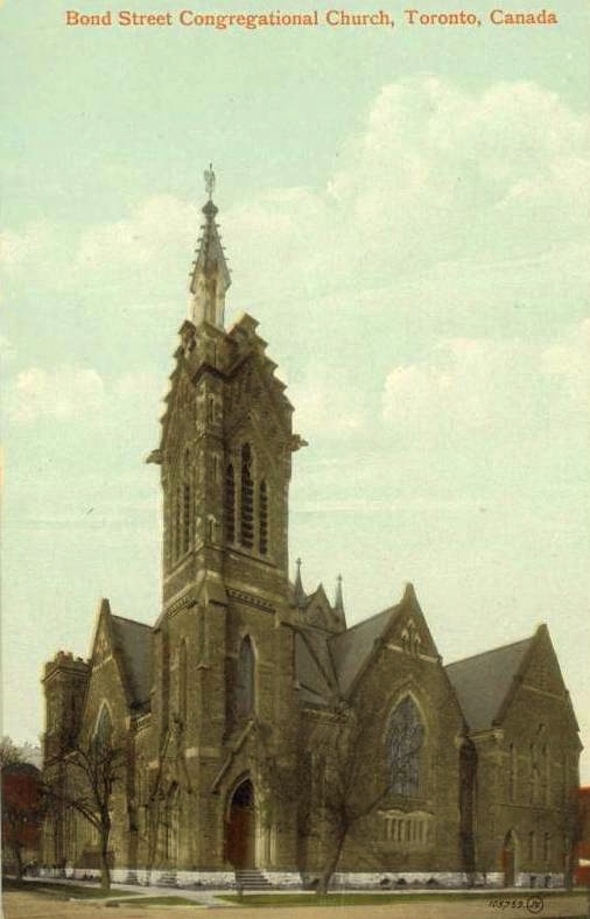 Built: 1878-79
Burned: 1981
What exists there now: Parking lot John Frank Place (80 Dundas Street East)
What happened: After the United Church of Canada moved out in the 1970s the property was acquired by Evangel Temple for a short time before they too left, leaving the church vacant. The Toronto Historical Board failed to find a buyer before a fire broke out in the vestibule of the main tower and severely damaged the building, leading to its demolition.
Why it's missed: Designed by E. J. Lennox in a gothic revival style, the church's unusual tower and dome attracted considerable attention on its completion. A uniquely complex roof and other details made it truly one of a kind. 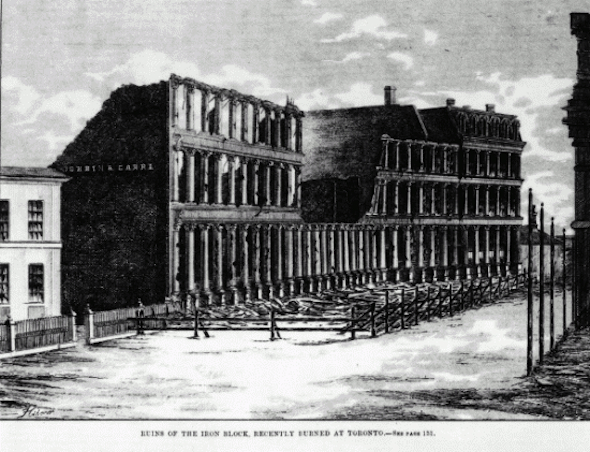 Built: 1870-71
Burned: 1872
What exists there now: Dominion Public Building
What happened: On February 14, 1872, a fire broke out and rapidly spread among the stores nearest Yonge Street. The blaze moved too fast for the city's fire engines to cope and a lack of water pressure made it almost impossible to reach the flames on the roof. The facade of the building collapsed on to Front Street just as the blaze was coming under control.
Why it's missed: Although it was rebuilt in 1873, the original Iron Block was one of the first buildings in Toronto to have a cast-iron facade. General mistrust of the material and post-fire jitters caused its use to be scaled back in the new version. The building's mansard roof was never replaced. 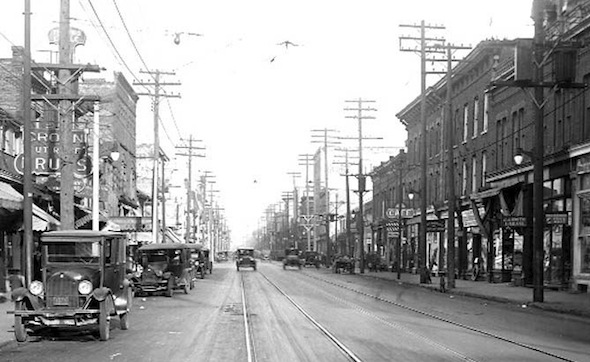 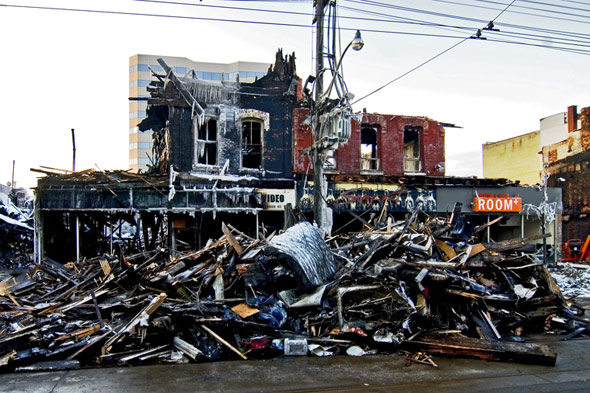 Built: C. 1910
Burned: 2008
What exists there now: Duke's cycle returned in 2011, but the rest of the site remains vacant and a new building on the east side of the site now houses the Kind Exchange. For a building-by-building rundown see the Grid article linked to below.
What happened: Designated a heritage conservation area in 2007, the group of buildings between Bathurst and Portland was destroyed when a fire broke out in National Sound, a stereo store. The fire also claimed properties containing Suspect Video, Duke's Cycle, Preloved, Jupiter Cannabis Shop, Room+ Furniture and Accessories, Organize by Design as well as several apartments above the businesses. The block was razed in the aftermath of the fire.
Why it's missed Speaking to the Grid's David Topping late last year, Councillor Adam Vaughan called the rubble-strewn space left by the buildings "the missing tooth on the Queen smile." Relatively inconspicuous during its lifetime, the historic Queen West block is, ironically, most noticeable in its absence. 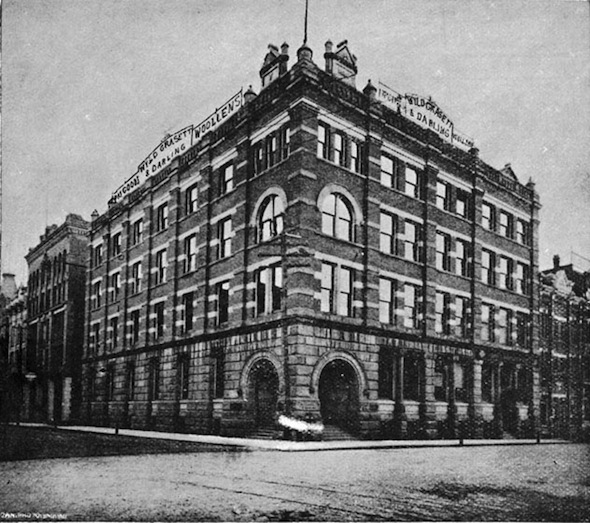 C. 1872
Burned: 1904
What exists there now: Brookfield (BCE) Place
What happened: On the icy evening of April 19, 1904, at around 8:00 a police officer noticed flames in the elevator shaft of the Currie neckwear factory at 58 Wellington Street and called in an alarm. Nine hours later roughly 100 buildings in the area surrounding Bay Street from the Esplanade to Wellington Street had been destroyed by the second great fire of Toronto. The remains of the Wyld-Darling building are one of the most memorable pictures taken in the fire's aftermath.
Why it's missed: Once the heart of the city's mercantile district, the great fire claimed many factories and wholesale stores along Bay Street near the waterfront. Had it survived the Wyld-Darling Building would be a perfect example of a Victorian workplace. 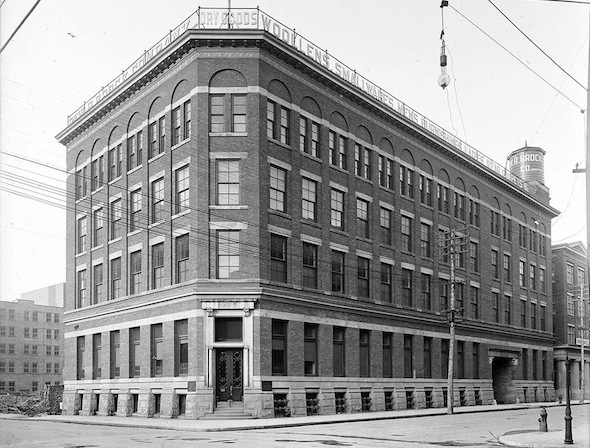 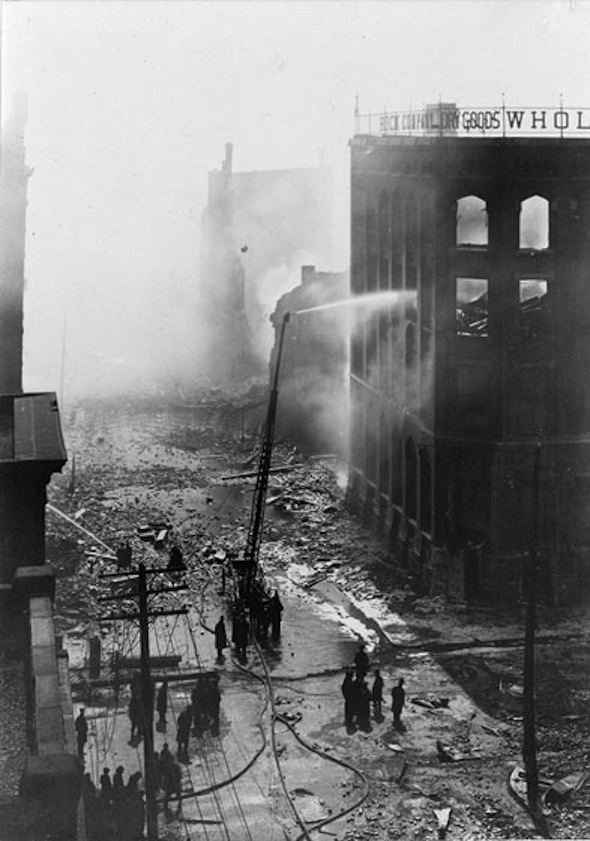 1870s (extended several times)
Burned: 1904
What exists there now: Toronto Dominion Centre
What happened: Another victim of the devastating 1904 blaze, the W. R. Brock Company building — located centre below the banner in the image above — was directly opposite the Wyld-Darling property on Bay Street. After hanging on for several hours thanks to its internal sprinkler system, a drop in water pressure eventually allowed the flames to claim everything but part of the facade.
Why it's missed: Another fine Victorian business, had it fared better it could have contributed to a very different Bay Street to the one we have today.

Here's a map of the locations featured in this post:

William Reynolds fire photo by jazzman37, Queen West Photograph by Hamish Grant. Thanks to Stephen Otto for his helpful insight.