As far as birthdays go, it may not be the most important number, but given all the talk of subways in Toronto, perhaps it's a good time to look back at one of the major extensions to our system in the 1970s. The Spadina line, the portion of subway between St. George and Wilson, was opened 34 years ago today. As the city's second newest subway approaches middle-age, painful memories of the Spadina Expressway fade a little further into history.

The Spadina subway and expressway projects were developed in tandem by Metropolitan Toronto under the leadership of Frederick Gardiner in the late 50s. The group's detailed plan for a network of subways and expressways â including the Gardiner and Don Valley Parkway - intended to keep the city running smoothly in the era of the car. Under this scheme, the Spadina section of the expresway system would have connected the 401 with Bloor Street, taking the subway's current route from the end of Allen Road, the only completed section of the project.

Controversial from the outset, the Spadina Expressway came within a hair of carving up the Annex, Forest Hill and many other communities and the project drew the considerable ire of thousands of residents and experts such as Jane Jacobs and Marshall McLuhan.

Originally slated to run along the central median of the proposed expressway, as it does from Eglinton West north, plans for the Spadina subway line had to be altered when Ontario Premier Bill Davis eventually bowed to the intense pressure and cancelled the road portion of the project in 1971, throwing his weight behind rapid transit instead. 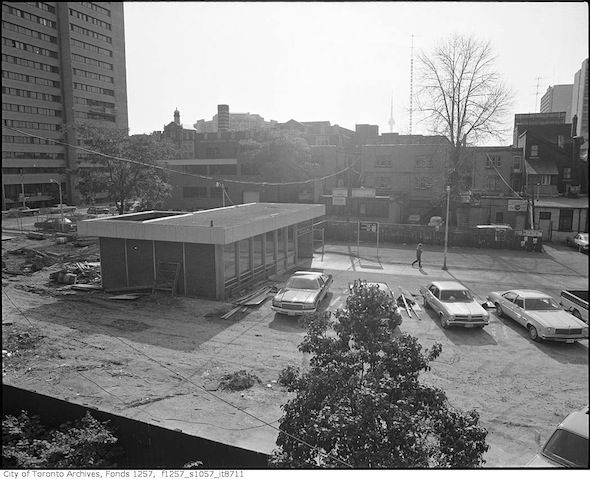 After five years of construction, the six-mile, $212 million line was opened on January 27th, 1978 in the presence of two subway trains full of dignitaries. Despite technical glitches in its first few weeks, the Spadina line quickly reached its rider targets and successfully boosted traffic along the struggling University line.

The new subway briefly followed the Bloor-Danforth line west from St. George then curved north to a stop near Lowther Avenue. This station, originally to be called Lowther, was renamed Spadina and connected to the Bloor-Danforth entrances during the construction phase to cut costs. In order to install access to the northbound platform at Kendal Avenue, workers had to carefully slide a historic house forward off its foundations while working underground. The house, back in its original position, is still an entrance to the platform. 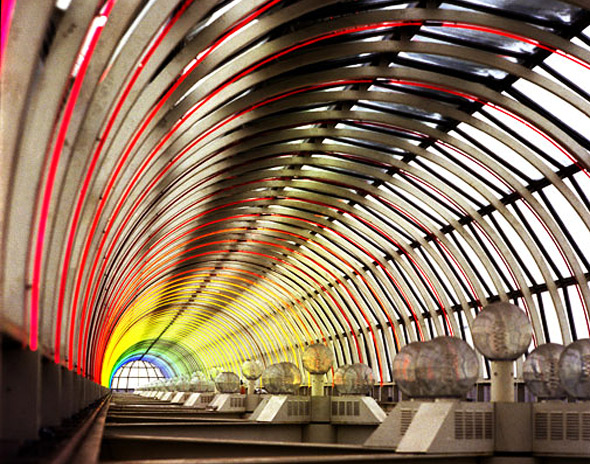 In an attempt to emulate the Montreal Metro and steer away from the minimal look of the Bloor-Danforth and Yonge lines, the TTC commissioned original artwork for each of the new stops. In many stations the original artwork is still in place, though a little worse for wear. One notable exception to this is Michael Hayden's "Arc en ciel," the fabulous light installation originally found at the Arthur Erickson-designed Yorkdale Station (he also designed Eglinton West). The TTC dismantled this work in the 1990s after minor electrical problems, but there's hope yet that it'll return. Transit Toronto has a good rundown of some of the other pieces to be found on the line.

The Spadina line's darkest hour came at 6:02 pm on August 11, 1995, when a southbound train travelling at around 50 km/h collided with the back of a stationary train between St. Clair West and Dupont, killing three people and injuring 30. The subsequent investigation concluded the driver, Robert Jeffrey, had misunderstood the signals, and safeguards in place to halt the train were found to be defective. The accident is the deadliest subway accident in Canadian history and it lead to wholesale changes in the way the TTC is managed and operated in terms of safety. 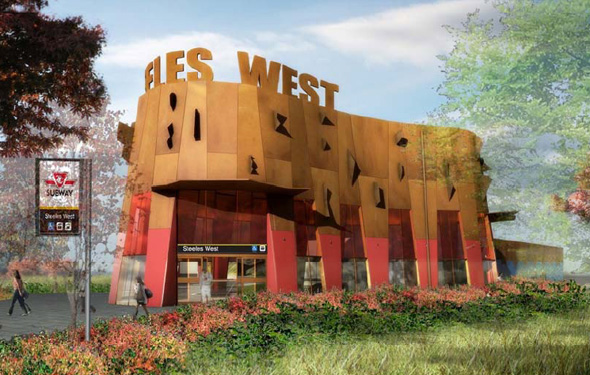 By 2015 the latest chapter in the story, the Spadina extension, should be complete. Adding six new stations, 8.6 kilometres of track and doubling the current length of the line, the upgrade is expected to cost at least $2 billion.

Images one and two from Toronto Archives.