Is the TTC the priciest transit system in North America?

Toronto is a unique city, and so is its public transit system. Few other places in North America offer quite the same mix of subway, streetcar and bus transit, all tied together by a single fare. But there are parallels and similarities out there if you look closely enough. Boston and Philadelphia offer perhaps the closest match of a smallish subway network mixed with legacy streetcar lines, and San Francisco closely mirrors the political tensions of the TTC, Metrolinx and GO with its Muni, BART and Caltrain mash-up.

Montreal and Washington DC have similar rapid transit ridership, while Los Angeles near-identical bus numbers. Yet in the big picture, the greatest commonality between systems relates to fares. All cities have to charge a rider to get from point A to point B, and many grapple with funding sources, labour issues, service levels, local politics and other factors that would sound familiar to even the casual transit observer. After suffering three years of deep recession, even well-regarded American cities have been raising fares and slashing service. Everyone is the same unfortunate situation of having to pay too much for transit... or are they?

It's fairly common knowledge that the TTC gets more funding from the farebox (67%) than any other North American transit system, so one would suspect its fares are relatively high in relation to other cities, but oddly this argument rarely gets mentioned during council debates or most articles covering the topic of fare hikes. 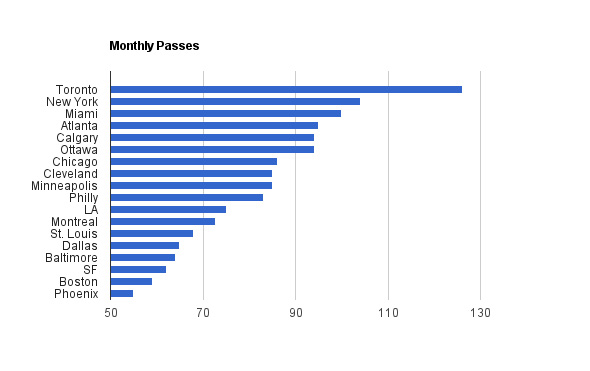 It can be very difficult to peer over the edge of the putative centre of the universe, after all, even in the age of Google. Besides a willingness to acknowledge that other cities actually exist, many assumptions are required to undertake a comparative study of transit fares (see below), and any general comparison will surely skim over some pertinent details. But the question must still be asked — in the afterglow of the latest TTC fare hike, how does Toronto transit stack up when it comes to fares? 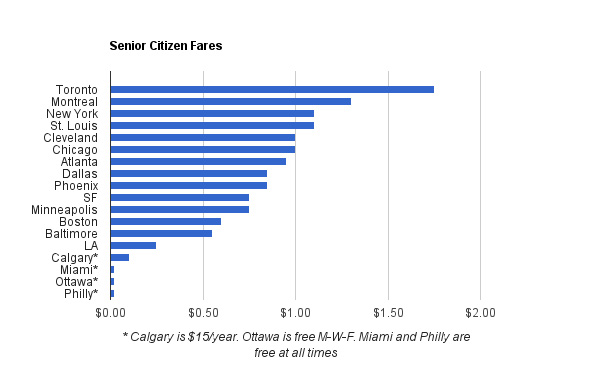 The answer turns out to be an "F," by almost any measure. Although riding the Rocket in Toronto was less expensive than, say, New York as recently as 1990, ever since, the TTC has sat on top of the fare heap. In three of the four most easily compared fare categories for major North American transit systems — the adult base fare, the adult discounted multi-trip fare, the senior reduced fare and adult monthly passes — the TTC comes up as the most costly ride. The sole exception is the adult base fare, where Toronto runs a close second to Ottawa (which says something about public transit funding in Ontario). When measured overall across the categories in question, the TTC is the most expensive single-fare integrated transit system in North America. 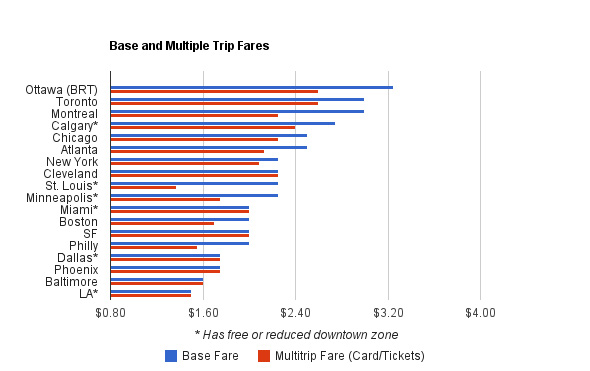 Given that context, is a fare increase for any reason reasonable in Toronto? Or does this show that something else is fundamentally broken on either the cost or revenue side that is driving TTC fares through the roof? There are multiple reasons for the the TTC's monetary woes to be sure — including a lack of provincial funding — but were the comparative position of its fares better represented by the Toronto media and at public meetings, one has to wonder if more pressure could be brought to bear on improving funding and reducing expenses to better protect the farebox. Surely the title of "most expensive transit" is one a striving world-class city would prefer not to keep. Spread the word.

Photo by Cameron MacMaster in the blogTO Flickr pool