As 2011 enters its final six weeks or so, it might be fun — or in fact quite painful — to look back to 1985 and what the TTC hoped its transit system would look like by now. We've actually already written about Network 2011 in relation to the transit policies of our last crop of mayoral hopefuls, but it seems like a good time to return to the topic given the challenges that face the current expansion of the system.

I won't rehash all the details of the plan and how it came to be, but here are a few highlights. As the map above shows, Network 2011 called for the construction of three new transit lines in the city.

From the beginning, there was much opposition to the Network 2011 plan. Some critics argued that a lower density corridor like Sheppard would be better served by LRT (yes, that debate has been going on for some time), while others thought that a DRL would lead to undesirable intensification of downtown neighbourhoods along its path.

Those objections, however, aren't the main reasons why only a fraction of the plan ever came to be. Because the project inevitably required capital from Ontario, changes in power at the provincial level eventually conspired to put an end to its ambitious proposal.

Originally put forward under the Bill Davis led Tories, when David Peterson's Liberals came to power, the plan was put under study and eventually modified (amongst other changes, the DRL was scrapped and a link between the Yonge and Spadina lines was proposed). That wouldn't take either. 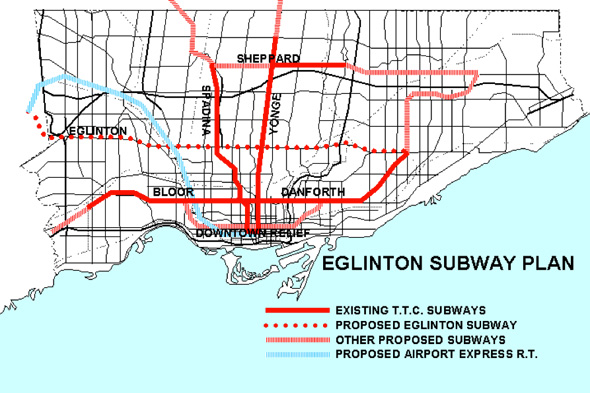 When Bob Rae's NDP came into power, emphasis was put on shorter subway lines on Sheppard and Eglinton and extension of the Scarborough RT and the Spadina line up to York University (the later of which is only now being built). These plans would also be modified. When Bob Rae was knocked out by Mike Harris in 1995, the Conservatives moved quickly to kill the Eglinton Line.

When it all shook out, the only piece of the Network 2011 plan that ever got built was the Sheppard Subway Line. While construction is finally underway to take the subway to York University these days, Rob Ford's plan to extend the Sheppard Line, a component that was a part of the these 1985 plans, looks like it might have already hit the skids.

When Peterson's Liberals re-envisioned Network 2011, one of the changes they made was to stipulate that they'd only fund the project if Mel Lastman could secure private investment in the line. Ultimately Lastman never had to make this happen because the NDP and, later, the Conservatives committed to getting the line built (in some form or another). Ford, on the other hand, faces just this task. This Liberal government appears as skeptical as the one that held power back in the late 1980s.

Given this troubled history of transit expansion and the recent announcement that Ford's line will have to be opened one station at a time (presumably due to a lack of funds), does anybody think the Sheppard stub will be extended much? Here's betting it won't be anything to get excited about.

Also worth reading on Network 2011: