Drumroll please! The Ryerson Athletic facility housed at what was once universally referred to as Maple Leaf Gardens, will now be called the Peter Gilgan Athletic Centre at The Gardens. As for the rink itself, that will be referred to as Mattamy Home Ice, after the company founded by Gilgan, who the university announced today has donated $15 million to the construction of the new facilities at the former original six arena.

There's no question that both of these designations lack the ring of MLG, but, let's be honest, even more so than the SkyDome/Rogers Centre, most people will still refer to the building by its former name. And they'd be mostly right to do so. The injunction filed by Maple Leaf Sports and Entertainment against Ryerson's use of the name refers to their athletic facility and arena, rather than the building's address â a point that the recently restored marquee so elegantly demonstrates. 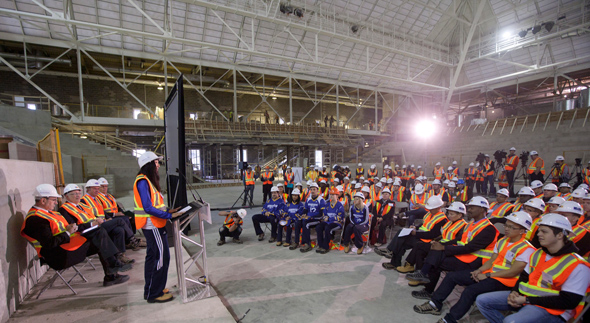 Even Sheldon Levy was quick to note this at a press conference this morning. "This building is, and will always be, Maple Leaf Gardens," the Ryerson President said of the historic structure. But, the adaptive reuse has been expensive, and Gilgan's donation will help the university with the $71.2 million price tag, which has risen from initial estimates of $60 million. 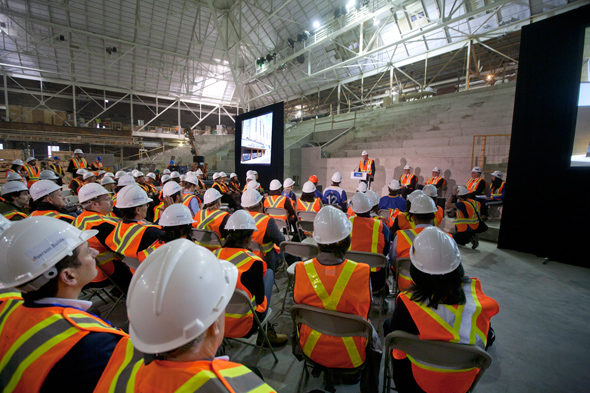 Today's press conference also offered the opportunity to get another peek at the upper half of the building, which is expected to open in Spring 2012. It's clear that progress has been made since we last had a look inside, but there's still a ways to go before it'll be possible to get a sense of exactly what the finished product will look like. The lower part of the building occupied by Loblaws, on the other hand, is set for its big reveal tomorrow morning.

I'd end this by asking what people think of the new name, but I suspect there's not much point given my comments above. Long live the Gardens.