Metrolinx still toys with the idea of downtown relief line

It's too early to get overly excited about this, but a report to be presented to the Metrolinx board that outlines strategies to ease future congestion at Union Station contains some intriguing options, one of which is a Downtown Rapid Transit (DRT) line. Running a similar course to the one previously plotted for a Downtown Relief Line (DRL), the DRT will be considered as part of a plan that also includes the construction of a new downtown GO station at Spadina and Front that would serve as the terminus for Barrie and Georgetwon service.

Just yesterday I re-told the troubled tale of the TTC's old Network 2011 plan, which first put forward the idea of such a DRL, and it seems like the idea just won't die. The primary impetus for its latest appearance is the very real fear that Union Station will not be able to handle the added passengers that will enter the transit system over the next 25 years. The report in question cites the likelihood that rider traffic at Union will increase between two and three times between now and 2031.

Should something like this ever get built â and don't hold your breath â Metrolinx projects that it would divert about 35 per cent of the GO customers to the new station and reduce congestion on the subway line. Both of these are crucial in their own right when you consider the projections for ridership and population growth over the next 25 years. According the report, population in the downtown core "is projected to increase over 80% from 71,000 in 2006 to 130,000 in 2031, employment is expected to grow over 25% from 315,000 in 2006 to 400,000 in 2031, and downtown core-destined transit demand is expected to increase over 50% from 156,000 peak period trips in 2006 to 236,000 peak period trips." 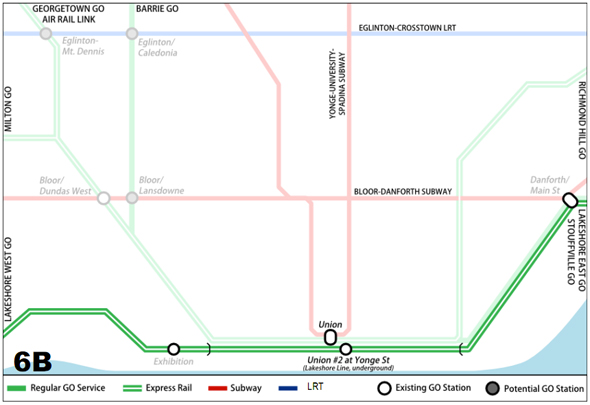 The other option that the report deems worthy of further study is the construction of a Lakeshore GO tunnel that would lead to a new terminus just east of Union Station. This wouldn't help much with congestion on downtown subways, but could shift more than 40 per cent of passengers away from Union.

The idea for a new subway line through the King/Queen in downtown Toronto has a long history that includes inclusion in Metrolinx's Big Move plans released in 2008. And while we're not really any closer to it becoming a reality on account of this report, the very fact that it continues to be discussed might be cause for some very cautious hope.